Triple H: United Kingdom 'will get a WWE pay-per-view event'

Triple H says it is a matter of "when rather than if" the United Kingdom will stage a WWE pay-per-view event.

The company made a rare venture outside of their traditional North American market for a major show, in Saudi Arabia, last Friday.

They follow that up with Backlash, live on Sky Sports Box Office on Sunday night, before heading across the Atlantic for one of their two annual British tours.

The presence of the WWE in the UK always reignites the conversation about the possibility of a major event in that region, and Triple H - real name Paul Levesque - is positive that is something which will happen very soon.

"It (the event in Saudi Arabia) was an open opportunity for all of the markets outside of the United States," he said. "Obviously the time frame of when we run things in the US doesn't work for a lot of markets and this gives us a chance to look at things in their time frames.

"That's especially the case in the UK, where the desire is very high. We've attempted things there in the past and as technology improves and we can get things down to doing them in a reasonable manner and at a reasonable cost, is really what it's all about. 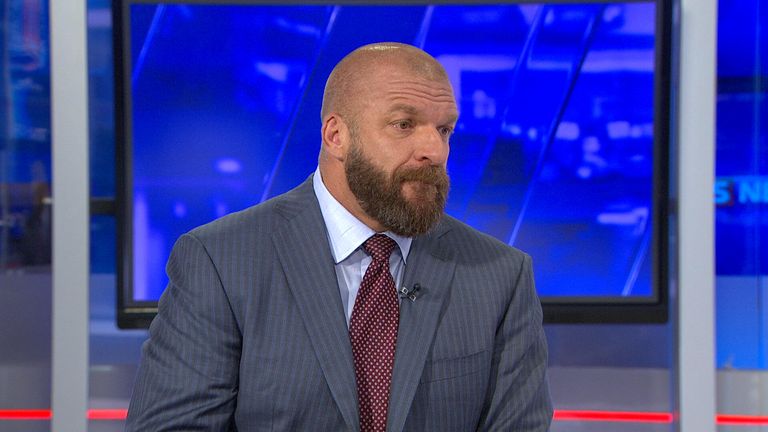 "Can we get there (to WrestleMania)? Sure, maybe over time. We would take steps in that direction and those steps are probably other pay-per-views."

"It's definitely something we're looking towards but when people say 'just do it' - we do 560 live events a year, we do an average of 9-10 live events a week and they're planned out a year, sometimes longer, in advance.

The time difference has long been cited as a stumbling block to a British pay-per-view; America is five hours behind the UK, meaning a lunchtime start to a major event for what is the vast majority of the WWE audience.

Finn Balor feels the British WWE fans "deserve" to be given a big pay-per-view.

There is also the added element of running events during NFL season, something which would be a substantial risk, but Levesque is confident any issues can be ironed out.

"There are a lot of aspects to it," he said. "It's about getting the right people in the right places to be able to put on a strong event with a good calibre and for it to be meaningful to the rest of the globe.

"To be able to do it in a cost-effective way in a business sense, having the infrastructure to do it internationally, these are all factors which come into consideration.

"There are a lot of balls in the air and it's just a matter of organising them. You're trying to do all of that while running pay-per-views, live television and everything else we do.

"It's not a matter of if we can overcome those obstacles but when we can, and getting them all lined up."

A conversation with Triple H and British wrestling usually comes back to WWE's visit in November, and the moment he found himself stood in the Wembley Arena ring as an impromptu Shield member as the crowd began to chant.

At first, their words were hard to make out. But it soon became clear what they were saying: "We want Mania".

Triple H addressed the fans that night with a twinkle in his eye and the message today remains the same as it was then - aim high.

How to book WWE Backlash!

"If you're going to set an ambition, set it high," he said. "As we always say, never say never. WrestleMania is a week-long series of events and the logistics of executing that week along with the week leading into it and the week after it are extraordinarily difficult in our own back yard.

"Can we get there? Sure, maybe over time. We would take steps in that direction and those steps are probably other pay-per-views.

"From my point of view I'd like to bring other meaningful events through WWE, whether that's NXT or the United Kingdom championships, taking international brands and putting them on in those markets.

Triple H joins the Sky Sports Lock Up podcast for an exclusive interview!

"As the world becomes smaller and more technologically advanced, it becomes easier to do these things live from different places. From my end, that's what I'm working towards."