Six Suns players scored in double figures as the Phoenix Suns tied the series 2-2 after a haphazard performance by the Los Angeles Lakers. Anthony Davis left the game at halftime through injury and for once, having LeBron James alone wasn't enough. 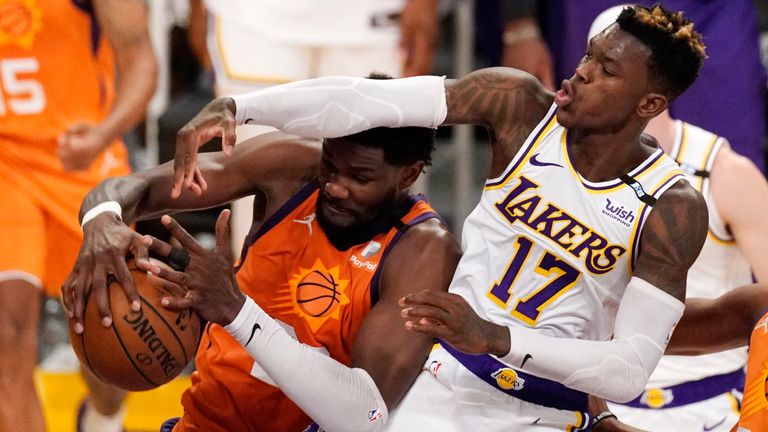 For much of the first half of this Game 4 encounter between the Phoenix Suns and Los Angeles Lakers, it felt like LeBron James' personal highlight reel.

At 36, he was the oldest player on the floor and yet still the same bulldozing, pirouetting, no-look reverse spin behind-the-back-passing freak of nature that has ruled over the league for the entirety of his 18-year career.

Hang this in the Louvre.

The Lakers headed to the tunnel at halftime just four points down. However, after the break one major problem became apparent: Anthony Davis would not be coming back out of it.

'The Brow' did not return to the game after sustaining a left groin strain while driving to the basket late in the second quarter, with Kyle Kuzma replacing him in the third's starting lineup.

The King is having fun out there tonight 😂 pic.twitter.com/gPL5FIQR5J

At which point, as though pouncing upon a wounded animal, the Phoenix Suns rampaged to a 16-point lead, outscoring the Lakers 27-15 in the period. With Marc Gasol helping stretch the floor off the bench and Alex Caruso continually doing Alex Caruso things, the Lakers just about clawed themselves back into it. Suddenly after a Gasol corner three and a LeBron free throw the Lakers found themselves only seven down with 2:40 remaining.

Enter one of the most chaotic minutes of basketball you'll ever see. It started with a missed Jae Crowder three, obviously, which was followed up by a typically cerebral Chris Paul steal on Gasol - he had three for the game, moving to 18th all time in the playoffs in the process.

Congrats to @CP3 of the @Suns for moving up to 18th on the #NBAPlayoffs STEALS list! pic.twitter.com/WFWoUNKPFy

Paul missed the mid-range pull-up, Gasol got back to get the very edge of a fingertip to the shot, and Schroder raced up the other end to do the same on a finger roll layup. Ayton snatched down another impressive rebound while both James and the German point guard stood around the basket waiting for a foul call that wasn't coming.

That gave the Suns all the space and time in the world to find Crowder all alone in the corner to make amends. The swingman was shooting a woeful 10% from three-point range in the series heading into this game, but on the biggest shot of the night he made no mistake. That was that, the series tied at 2-2.

After the game, Paul's rallying cry was clear. "Game 5 is going to be a dogfight. We're going back home though: Phoenix we need you."

Tonight, it seemed all they needed was the Point God's range of movement back after he had struggled with his right shoulder through the first three games. With nine assists on zero turnovers, this was classic Paul (18 points), who seems to elevate everyone else on the court through sheer presence and force of will alone.

Ayton (14 points, 17 rebounds) was once again superb, barrelling up, over and through Andre Drummond at every available opportunity. This included three straight baskets in the crucial third period that sent the Suns on their merry way.

For Game 5, head coach Frank Vogel must now be considering starting Gasol (+1), Caruso (+8) and bringing Montrezl Harrell (+6) back into significance within the rotation. Other than LeBron James they were the only players with a positive net impact for the Lakers (although Ben McLemore did go 2-3 from deep off the bench).

While the Suns were balanced on both ends throughout, led by the fiery yet calm play of their future Hall of Fame point guard, Los Angeles seemed uneven and at times desperate - a team still struggling to find its true identity outside of James' ongoing comic book superhero impersonation.

Alex Caruso off the glass, LeBron James with the slam! pic.twitter.com/yNgH70slLz

With the Lakers' other superstar now injured that is likely to continue, if not become increasingly exaggerated. The problem is, this individual strain is solely what LeBron was trying to avoid when teaming up with Davis in the first place.

It appears as though, once again, he will have to do it on his own. Tonight it wasn't enough and given how good the Phoenix Suns are, and how healthy Chris Paul is looking, it likely won't be in Game 5, either. Time for Hollywood's supporting cast to step up. And if they need an example of how it's done, they only need take a quick look at their opponents.