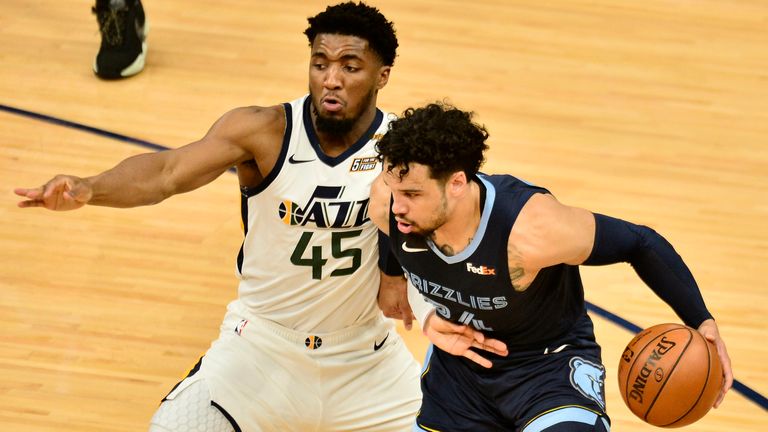 Donovan Mitchell led the way with 30 points as the Utah Jazz took full control of their first-round series against the Memphis Grizzlies and move one game away from the conference semi-finals.

However it was veteran point guard Mike Conley who blocked a Ja Morant floater, then countered with a three-pointer in a late run that allowed the top-seeded Jazz to hold off the host Grizzlies 120-113 in a frantic Game 4.

A third straight win gives Utah a 3-1 lead in the best-of-seven series and creates an opportunity for the Jazz to advance to the semi-finals with a home win on Wednesday.

Down most of the way but facing just a 110-106 deficit after a Rudy Gobert free throw with 3:57 remaining, Morant attempted to cut the deficit in half with a short shot under heavy pressure from Conley.

But the former Grizzlies star got a hand on the attempt, grabbed the deflection and, 14 seconds later, buried a 26-footer that gave Utah a seven-point advantage and proved to be the back-breaker.

When Morant misfired on a three-pointer and Bojan Bogdanovic bombed in a 23-footer at the other end, the Jazz had opened a 116-106 lead with just 2:40 to play, allowing the visitors to coast home.

Once again in the series, the big difference in the game came in three-point shooting, with the Jazz hitting 17 of 34, while the Grizzlies managed to make just 10 of 35.

Donovan Mitchell paced Utah with a game-high 30 points, while Jordan Clarkson hit four three-pointers to account for half of his 24 points.

Gobert finished with 17 points to complement eight rebounds, Royce O'Neale grabbed a team-high nine rebounds to go with nine points, Bogdanovic added 13 points and Conley had seven assists and 11 points for Utah, which last year went up 3-1 in its first-round series in the NBA bubble before losing three straight to Denver.

Morant had a team-high 23 points and game-high 12 assists for Memphis, which won Game 1 of the series at Utah.

Dillon Brooks and Jaren Jackson Jr contributed 21 points apiece, De'Anthony Melton had 15 and Jonas Valanciunas completed a double-double with 14 points and a game-high 12 rebounds for the Grizzlies.

The Jazz held the upper hand most of the way, leading by as many as five in the first quarter, nine in the second and 13 when Clarkson buried a last-second three-pointer for a 100-87 advantage after three periods.

Memphis made their big push back into contention by limiting Utah to just two points in the first 4:53 of the final period. A short floater by Melton got the Grizzlies within 102-99, temporarily creating a tight game before the Jazz's decisive run.