Game 1 between the Milwaukee Bucks and Brooklyn Nets takes place at Barclays Center at 12.30am on Saturday night, live on Sky Sports Arena. 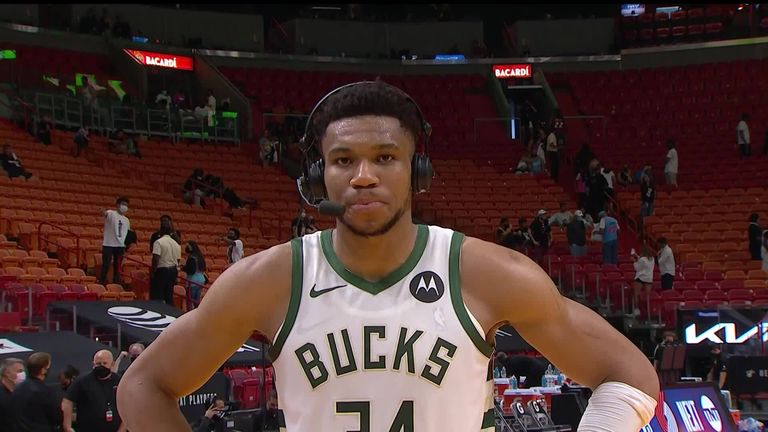 Giannis Antetokounmpo might be able to play more, but the increased playing time of 36 minutes per game in this year's playoffs compared to just 30 last season has changed the narrative. It meant his Milwaukee Bucks swept the Heat out of the first round of the playoffs last week, rather than being embarrassed by the same team in 2019-20 after winning just one game in the best-of-seven second round series.

When Mike Budenholzer became the coach of the Bucks in 2018, he installed a five-out system that saw the ball in Antetokounmpo's hands to drive to the rim with an open lane or feed any open shooter on the perimeter. It turned 'The Greek Freak' into a two-time league MVP, but after the Bucks flamed out of the playoffs earlier than many expected for two seasons running, whispers around Budenholzer's job security and Antetokounmpo's ability to rise to the next level began turning into full-blown conversations.

Something clearly had to change. It was no use coddling Antetokounmpo. He has played in 92 per cent of regular season games throughout his career - he's not immune from injury but he's pretty reliable in terms of health. And he has not been run into the ground at any stage, having only played around 19,000 minutes in his career - LeBron James had played more than 25,000 minutes in his first eight seasons. So perhaps it was time for Budenholzer to risk a bigger workload on his best player.

When Antetokounmpo was off the floor last year in the playoffs, the Bucks were -0.2 points per 100 possessions compared to their opponents, according to Basketball Reference. It was negligible. Not even a whole point. But it was still a net negative. And the main issue was that he was only on the court 57 per cent of the time, which means that 43 per cent of the time, the Bucks were being outscored. 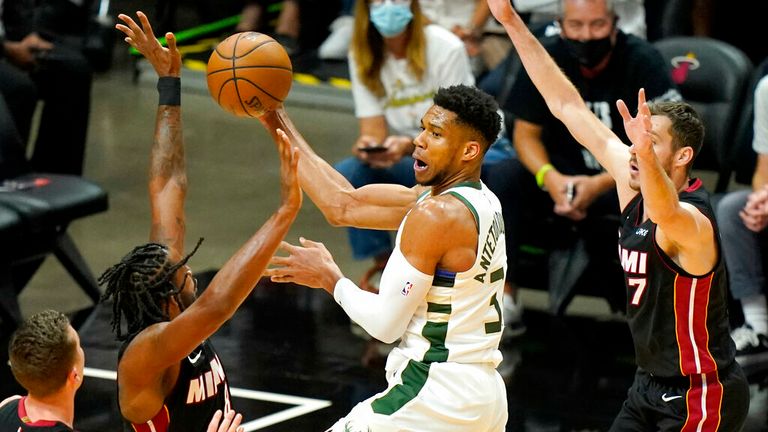 It doesn't have to matter, especially because Milwaukee outscored their opponents by 2.2 points per 100 possessions when Antetokounmpo was on the court, but there was a huge difference between playing against the Orlando Magic in the first round - when he averaged 30 points, 16 rebounds and six assists - and the Miami in the second.

Versus the likes of the Heat's Bam Adebayo, Jimmy Butler, as well as Jae Crowder and former Finals MVP Andre Iguodala, Antetokounmpo managed just 21 points, 11 rebounds and five assists last season. He picked up an injury to miss the final game and a half of the series.

Why do the minutes matter?

While taking a lot of criticism, Budenholzer actually increased Antetokounmpo's minutes in that series against the Heat last year. He played 35.7 minutes in the first three games before suffering the injury in Game 4, which poses the question: was Budenholzer correct to limit his star's minutes in previous rounds?

Antetokounmpo attacks with no regard for anyone who is in the way, averaging 11.3 drives per game, but it also poses a risk for his own body. The longer he is out there throwing his long limbs around, the more danger they are in, and he sprained his ankle in the 2020 playoffs stepping on someone else's foot in the paint. Yes, it might be an unusual injury, but it's made all the more likely thanks to his playing style.

During this regular season, MVP voters clearly wanted to see Antetokounmpo take the next step before letting him win the award again. He averaged 33 minutes - the most under Budenholzer - but his box scores were down across the board.

Since the playoffs began, he has averaged 36.3 minutes - again, a high since Budenholzer took over - and while his point average is the lowest since Jason Kidd was in charge, he did, however, average the best rebounding and assist numbers of his playoff career in the Heat sweep.

And he's not the only one receiving more playing time. Only Khris Middleton averaged more than 34 minutes in last year's playoffs, but this season, he and Jrue Holiday join Antetokounmpo above that number.

All of that, in context, leads you to believe that his production might be less to do with the six extra minutes Antetokounmpo is playing, and more to do with who else is playing alongside him.

Last year, Eric Bledsoe played the fourth-most minutes on the team. As a 10-year veteran, the guard has a strong resume and scored more than 20 points per game for two years straight, and he was perhaps better known for his long wingspan and defensive fight. He seemed a great option for the Bucks in those two full seasons under Mike Budenholzer, and suited a simple offense built around Antetokounmpo, and a defense that encourages sticking with your own player while fighting through screens.

But that type of system wasn't working in the postseason. After successive, embarrassing losses, the team was grateful to re-sign Antetokounmpo to a five-year supermax and made changes. Milwaukee brought in Holiday, a more versatile playmaker who boasts better IQ on defense, while also adding a sharpshooter and undersized pest in Bryn Forbes, as well as trading for another smart, multi-positional defensive presence in PJ Tucker.

These players have allowed the team to get more creative with defensive systems. This year, they have switched assignments, on-ball and off-ball, and have experimented with dropping back their big man - usually Brook Lopez or sometimes another newcomer in Bobby Portis.

This nullified the strengths of Bam Adebayo, the Miami Heat big man who caused so many problems for the Bucks last year. He didn't stretch the floor out to the three-point line but averaged 17 points and 12 rebounds with four assists while playing to an extended mid-range of 16ft from the basket.

The Bucks bigs dropped so far off Adebayo this year that they could act as a roaming safety along the backline that it mucked up the middle to make life difficult for Duncan Robinson and Tyler Herro as they tried to navigate the court and create space for open three-point shots - and Jimmy Butler struggled to do his work in a clogged lane. All of that said, for all the changes the Bucks made this year, the truth is, the Heat weren't the same team as they were last season either.

The real test for Milwaukee will be on Saturday versus the Brooklyn Nets. The Bucks' new defense didn't stop their opponents from scoring this year, but that's what happens when you play at the second-quickest pace in the league. The real metric was their net rating - the point differential between points scored and points allowed per 100 possessions - which was the fourth-best in the league this year at +5.8.

The Nets don't have a great defensive identity. They have enough high IQ basketball players to suggest they might be able to put a string of good defensive games together to reach the NBA Finals. But having Kevin Durant, James Harden, Kyrie Irving and Blake Griffin healthy and scoring, while boasting the best three-point shooter in the league and a handful of super-effective role players, means that on most nights Brooklyn will be able to outscore their opponents.

The Bucks will hope their new defensive system is strong enough to hold those elite offensive players at bay for four out of the seven games. But to stay with them on the other end of the court, Milwaukee might need more than 36 minutes from Giannis Antetokounmpo, as well as Holiday and Middleton. How far they go will be determined by how far Budenholzer is willing to push his top guys.