The live NBA Playoffs continue on Sky Sports on Tuesday night as the Atlanta Hawks head to Philadelphia for Game 2 against the 76ers, live from 12.30am.

Luka Doncic and the Dallas Mavericks are out in the first round again.

The urgency to get their young superstar enough help for some deep playoff runs will grow fast, although the Mavericks are about to buy themselves time in pursuit of the franchise's first postseason series victory since the 2011 NBA Finals.

Doncic left little doubt Monday he would sign a five-year extension expected to be worth more than $200m when free agency opens this summer. That contract would start in 2022-23.

Meantime, the Mavericks have to decide if Kristaps Porzingis is good enough to make them title contenders as the No. 2 to Doncic after the 7-foot-3 Latvian with a maximum contract was barely a role player in a seven-game loss to the Clippers.

While Doncic averaged an NBA-best 35.7 points per game in the first round, Porzingis' production was not even close to last season's first-round loss to LA. His per-game averages were down by nearly 12 points and more than three rebounds.

Porzingis was a 2018 All-Star with plenty of post-up work in his game with the New York Knicks before a knee injury ended that season and the Mavericks acquired him in a blockbuster deal a year later.

Dallas coach Rick Carlisle is not a big fan of the post-up game in today's NBA, with so much emphasis on three-pointers and layups or dunks. LA went to a small, switching lineup that neutralised the pick-and-roll work of Doncic and Porzingis.

"My game also has to evolve," Porzingis said. "I have to find ways how I can be effective, which obviously I should probably shoot more threes and stretch the floor for my teammates."

Despite a neck strain that limited him in a Game 4 loss, Doncic was more spectacular on balance than in last year's bubble. The two-time All-Star was steady and relentless, getting to the rim when he needed while still hitting threes and distributing to team-mates.

Luka Doncic scores 42, 14 assists and eight rebounds in the Dallas Mavericks Game 5 victory over the LA Clippers to lead the series 3-2

Doncic scored or assisted on 31 of 37 baskets in a Game 5 win – joining LeBron James and Allen Iverson as the only players with a hand in at least 80 per cent of a team's buckets in a playoff game.

"Even before this series started, I think he's proven he's a top-five player in the world," Carlisle said. "This series certainly validates that. And we've just got to keep building the team around him."

Keeping one of their own? 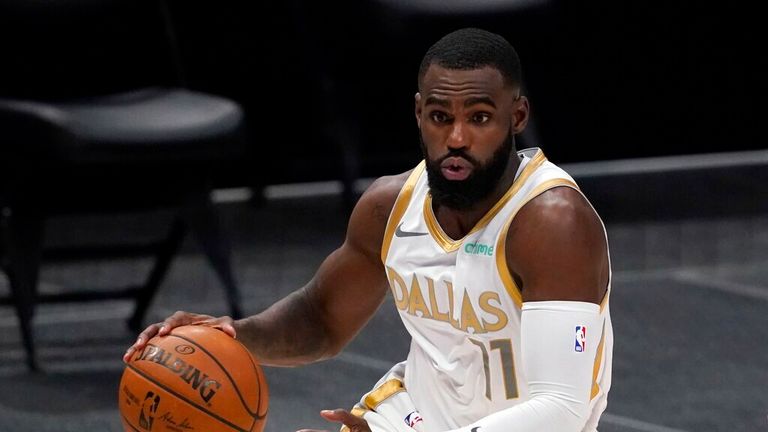 Led by Tim Hardaway Jr's career-high 42 points (17 in the fourth quarter), the Mavericks defeated the Pistons 115-105 during the regular season

There are not many options for a new number two behind Doncic, so the focus for now could turn to bringing back Tim Hardaway Jr. The shooting guard averaged 26 points in an eight-game stretch late in the regular season when the Mavericks successfully avoided the play-in tournament.

Hardaway's 28 points in Game 2 against the Clippers included a huge three-pointer late to help Dallas secure a second consecutive road win in the first NBA playoff series in which the road team won the first six games.

Hardaway, a secondary piece in the Porzingis trade, said he still wants to start after accepting a hybrid role as a starter and sixth man this season, but the pull to Dallas is strong. His $71m, four-year contract is expiring.

"I really feel like I created a niche for myself here to be a part of something bigger than myself," Hardaway said. "If you were to talk to anybody that's around me 24/7, they would know that I love it here in Dallas." 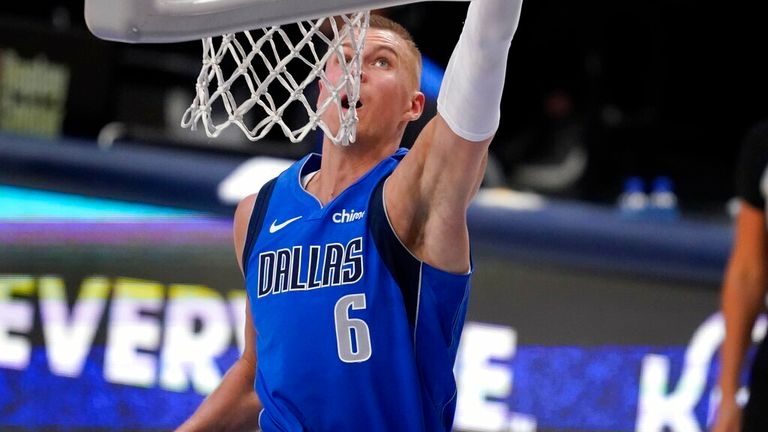 The oft-injured Porzingis played the entire series this year after a torn meniscus in his right knee limited him to the first three games of a six-game loss in last summer's bubble. The injury also forced him to miss the start of this season, and remained an issue at times.

It remains to be seen though if he can become more impactful within the Mavs' style of play, otherwise his contract (five years, $158m) is going to be a massive overpay.

Doncic said he plans to help Slovenia try to qualify for the Tokyo Olympics. Boban Marjanovic, who will be a free agent, said the same about Serbia. The 7-4 Marjanovic played a prominent role in the final four games of the LA series after not playing in the first three.

Germany's Maxi Kleber has a tougher decision after battling back and Achilles issues during the regular season and playoffs. He was among four players to miss time simultaneously early in the season after a positive COVID-19 test. Kleber did not sound optimistic about playing for his home country. Dwight Powell could play for Canada.

Both players acquired in a deal with New Orleans at the trading deadline are not likely to return. JJ Redick ended up sidelined again by a right heel issue that delayed his Dallas debut. The shooting guard did not play in the playoffs. Nicolo Melli was not expected to contribute much, and did not.

An intriguing summer lies ahead in Dallas and the franchise has a few key decisions to make in order to get the right mix of ingredients to support Luka.