Coverage of the WNBA continues on Saturday as A'ja Wilson and the Las Vegas Aces take on the Indiana Fever. Join us live from 6pm on Sky Sports Arena

A'ja Wilson nearly did it all last season.

She then pulled out even more heroics by leading a limping Las Vegas Aces to the Finals.

It was a little too much to win a championship, especially with the way the Seattle Storm were playing during the 2020 season in Florida, but Wilson showed that some better health to her company this year could see her take that extra step.

If someone said Wilson’s scoring average was the second worst of her career this season, you would think something was wrong, but even as a rookie she had MVP-worthy numbers of 20 points and eight assists. Last year she was up above 20 points again.

Her down year came in 2019 when she was learning to play with Cambage for the first time. The center took up space in the low post, where Wilson likes to operate, and needed touches and shots to be productive.

Wilson’s scoring dipped to 16 points, but in the bubble, it looked like she was a better player as the lone leader. This is why there were questions around the Aces coming into this season. It’s not that they did not have the talent, and it’s not that Wilson was not capable, it’s just a question as to whether they could put it both together.

Size was not the issue when the Las Vegas Aces were fully healthy. In 2019, Liz Cambage, Dearica Hamby, Carolyn Swords and JiSu Park gave them five players, including A’ja Wilson, that stood 6ft 3in and above who largely operated in the same area of the court.

Swords is retired now but head coach Bill Laimbeer clearly appreciates size for the rest of the roster as well. Jackie Young is becoming one of the best big guards in the league, using her 6ft size to defend well and finish with strength, while the team added Riquana Williams and Chelsea Gray along with the hope of Angel McCoughtry returning at some point. These tough, physical guards fit the preference of what Laimbeer wants from the ball-handling position. As such, Kelsey Plum has seemingly been relegated to the bench.

But this has not necessarily been a bad thing for Plum or the team. Her minute averages are basically the same, but Plum comes in when the volume scorers are heading for rest and she can run as many plays for herself as she wants. It’s allowed Plum to score a career-high 13 points per game and in many ways it has made the team more well-rounded, giving the Aces an offense when Wilson goes out.

With the extra talent, Wilson might have found herself having to give up shots, but with Plum coming off the bench and Gray pushing the ball ahead to the athletic big more often, it helps create easier opportunities and points for the reigning MVP. The Aces average the fastest pace in the league at 81.7 possessions per game, are third in assists and have the highest scoring average.

When the game slows down, they still have the most dominant low post player in the league in Cambage and she has a higher scoring average per 100 possessions than Wilson.

Just five per cent of Cambage’s shots come from distance and Laimbeer is a master of creating space inside the paint when there are multiple bigs on the floor. So even though there is plenty of size around her, Wilson, Hamby and even Park are all good enough passers to get each other in the best positions possible in a high-low offense.

This multi-pronged approach to destroying the competition is working. The Las Vegas Aces are in a heated race with the Connecticut Sun and the Seattle Storm for the top spot in the WNBA. 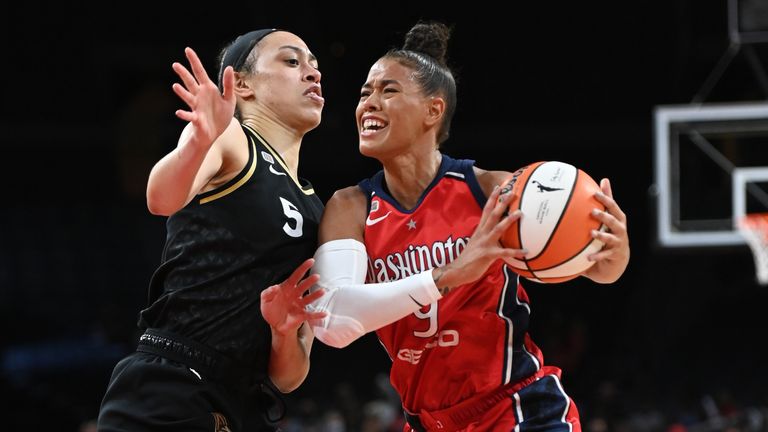 Highlights of the regular season game between the Washington Mystics and the Las Vegas Aces in the WNBA.

You might think that the first two rounds of the playoffs might be easier as the better teams would typically face a lower seed. But the WNBA’s bye system means the top two teams advance beyond the first two playoff rounds and the three and four seeds get a single bye.

The teams in positions 5-8 face two rounds of single elimination.

Currently circling those spots are: the ever-dangerous Phoenix Mercury, featuring a MVP-worthy season from Brittney Griner and the veteran presence of Diana Taurasi; the Chicago Sky with talented roster and the hungry homecoming queen Candace Parker; the New York Liberty, who have something to prove after finishing last in 2020; the surging LA Sparks, finally getting healthy; Arike Ogunbowale, the most dangerous scorer in the league, on the Dallas Wings; and the Washington Mystics with a returning Elena Delle Donne.

If you can secure a double-bye to avoid two rounds of potential upsets against these teams, there is great benefit this season in particular.

The Aces need to make a return trip to the WNBA Finals. Bringing back all this talent after reaching the ultimate series last season and falling short would be a failure. Wilson’s scoring might be down compared to last year, but her rebounding is up - which is impressive considering who is on the floor with her. Her free throw percentage and assists are also career-highs.

Wilson has shown she can raise the bar for her team, and this year she is displaying how being a leader doesn’t always necessarily mean scoring more. She has won an MVP, and is in the conversation again this year, but if Las Vegas are going to take the next step toward winning a championship, she will need to do it all, and more.