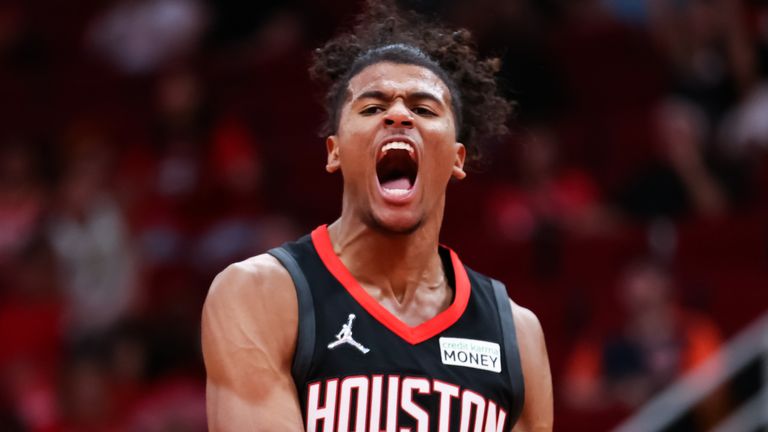 Jalen Green hits eight three-pointers for the Houston Rockets, breaking their rookie record of shots drained from beyond the arc, in loss to the Boston Celtics in Week 1 of the season

The Houston Rockets got as close to anyone to toppling the Golden State Warriors dynasty in the Western Conference. Had it not been for Chris Paul's injury they may well have been the team to get the better of Steve Kerr's juggernaut.

But it is now rebuild time in Houston and it is not pretty. The team have just one win in their opening 15 games this season and they have been run off the court multiple times.

When James Harden decided it was time to move on there was no option but to push the reset button in Houston and now it is time to look to the future.

It will not be easy to build a team as competitive as that one, but there are the beginnings of a rebuild coming together.

Here, we break down all the key areas of focus for the Houston front office, after the team lost its 14th game in row on Saturday night.

Much of the hope for Houston stems from the talent they were able to snag in the 2021 draft, where they had four first-round picks.

Jalen Green was the second pick in the draft and comes with a massive potential upside, as you would expect from someone picked in the top five. A fluid and natural scorer, he is a former consensus five-star recruit and finished plenty of alley-oops, dunks, and difficult lay-ups as well as displaying the ability to confidently knock down shots from all three levels of the court last season.

He also scored efficiently in his single campaign with the NBA G-League Ignite team hitting over 46 per cent of his field goals and 36 per cent of his three-point attempts. Green is quick and can blow past defenders, with the hops to finish and shows a good feel for the game for a 19-year-old. On the other end, he is active and engaged as a defender and quick reflexes saw him average 1.5 steals per game.

Next up was Alperen Sengun. The Turkish big man was take outside the lottery but is easily a top-10 prospect in this draft, probably even higher.

Sengun was a polarising figure during the draft and it was surprising he fell just outside the lottery given the phenomenal numbers he put up as he dominated the Turkish Super League with Besiktas. He is an elite interior scorer and has great vision and awareness for a big man, allowing him to facilitate for his team-mates.

In his first season as a professional, Sengun carried Besiktas for stretches last season. Leading the Turkish 1st Division in per-minute scoring and offensive efficiency, the center made his National Team debut, averaged 19 points and 8.7 rebounds per game between the Turkish 1st Division and FIBA Europe Cup, and was earned BSL Most Valuable Player as he lead Besiktas to a spot in the semi-finals. He is one of the most productive teenagers in the last 20 years in European basketball and Houston were delighted to pick him up with the 16th pick.

Usman Garuba, the Spaniard born to Nigerian parents, was taken next by the Rockets. In 2019, aged 17, he became the youngest starter in the history of European giants Real Madrid, and the following year Garuba was named EuroLeague Rising Star and The ACB league's Best Young Player. Definitely another player bursting with potential but he has limited minutes so far.

Finally, with their fourth first-rounder in the draft just gone, they took Josh Christopher – a very athletic combo guard who can take the ball to the rim to score and can finish plays above the rim. His jumper and shot choice need to improve but again he's definitely got talent to work with. Christopher has seen slightly more court time than Garuba so far but, again, reps have been fairly limited.

It is clear with all four players, though, that the future ceiling is very high for this team. The important part is making sure they reach it.

Draft assets, players who could be flipped and bad contracts

It is not just the young players who have been drafted you have to rely on developing, Houston have a good stock of future draft assets and some players who could be traded for even more draft stock, or another piece to help in the shorter to medium term if the team turns a corner.

Christian Wood is the most tradeable player on the roster and seems to be on a different timeline from the rest of the young core at Toyota Center, aged 26. No question, he could be a very useful player for a good team. Wood is averaging a double-double for the year (16.1 points per game and 11.1 rebounds per game) and is the most dependable player currently on the court for Houston.

2025
– First-round pick from Houston, Oklahoma City, OR Brooklyn (Oklahoma City can swap its 2025 1st for Houston’s first-round pick, top-10 protected; after that is decided, Houston can swap whatever pick it has for Brooklyn’s selection, if desired)
– Houston second-round pick

His contract of $13.6m rising to $14.3m guaranteed through next season is gettable for most teams in terms of salary filler and not too risky should things not work out. The player himself of course may also lose patience with the rebuild and decide that his future lies elsewhere, giving Houston a decision to make.

Another big man they have who has the potential to do a job for a contending or potentially contending team as a glass cleaner and inside scorer off the bench is Daniel Theis. His contract is currently $8.3m steadily rising to $9.6m through the 2024-25 season. A team would need to very sure he was the right piece to take a punt though.

Houston have a number of players on the wing who are available with affordable salaries as a potentially complementary piece for a better team. Danuel House averaged 9.6 ppg for Houston over the course of the past three seasons and could be a very good option from the bench for a number of teams. David Nwaba has been a serviceable player in Chicago, Cleveland and Brooklyn prior to finding a home with Houston last season, where he averaged 9.2 ppg and 3.2 rpg in 22.6 minutes.

Primarily deployed as a small forward Jae'Sean Tate has averaged 11.4 ppg across his two seasons in the league on an average of 28.9 minutes, he is not going to move the needle massively but could be a decent piece and his contract is very cheap through next season. After that, he is undoubtedly going to require a bigger financial commitment.

Houston will be glad to be rid of that contract, and when they do it will give them some flexibility with their young rookies mentioned earlier and Kevin Porter Jr - the versatile 21-year-old acquired through trade with the Cavaliers - who is putting up 12.7 ppg, 4.1 rpg and 5.1 assists.

Acquired in January 2021 for a future top-55 protected second-round pick, it looked to be a shrewd piece of business by Rockets GM Rafael Stone but the youngster's game has been plagued with turnovers and he has been unable to find consistency. But he is 21 and starting in the league admittedly before he is probably ready, so he has time on his side if not the patience of fans.

The most immediate decision facing the franchise is that of head coach Stephen Silas. His predecessor Mike D'Antoni has a record of 217-101 in the regular season, and 28-23 in the post-season - both mightily impressive. Silas on the other hand has gone 18-69, with just a solitary win in the current campaign going into Saturday night's clash. Of course, the circumstances are mightily different but that does not make a difference to fans hungry for success.

Whether Stone feels Silas is the right man to develop the team for the long-term is the question here, but the scrutiny from fans will only seek to add pressure on both parties.

In terms of that development, in Green, Houston believes they already have one of the key pieces needed in this rebuild. His average of 14.4 ppg in 32.2 minutes is solid enough if not spectacular. He has shown flashes even if he is not the finished article yet. Anyone going at number two in the draft is someone you expect to become a franchise player. Much of the team's trajectory will depend on his actual quality.

But they will need another cornerstone for the franchise. Sengun could potentially step up and some fans believe he should already be seeing his minutes increase. His vision, strength, and overall feel for the game has seen him average 9.4 ppg, along with 4.8 rpg and 2.3 apg in 19.4 minutes each night. Worthy of an increase without doubt but the 3.2 fouls, as well, accumulated during those minutes, show that this is still a player finding his feet at NBA level.

The big crunch will come in a couple of years, the offseason preceding the 2023-24 when they have to decide who to pay and who to let go. That summer will see a stacked free agent class as well to further muddy the waters for Houston.

One option with Wall's colossal contract prior to that is to execute a buy-out, and that may suit a player entering the veteran stage of his career who will still feel he has something to offer a winning team.

That could give Houston more flexibility when it decides whether to re-sign Wood and Tate, who are the two players who could command good money in the current team. Wood is very much a 20-and-10 guy and could well be the recipient of a max offer. If he stays patient through to that summer, deciding whether to give him one could be the biggest decision the Rockets are facing.

Tate will not command a max deal but the money could be a little over what the Mid-Level Exception would allow them to pay, so that should be something Houston will need to ponder. If they decide they cannot afford to keep him, it may make sense to flip him before the trade deadline as an expiring contract. Likewise, with Eric Gordon, should they find a suitable landing spot for the veteran shooting guard.

It is worth considering that the salary cap could increase in a big way and be over $119m for the 2023-24 season. That could make a big number for the likes of Wood more palatable and should figure into Houston's decision-making.

Green's team option will certainly be picked up you would think and so will Sengun's so then it is just a case of the Rockets deciding if they should pick up team options on David Nwaba and Gordon (if not traded), and a qualifying offer decision on Kevin Porter Jr.

What these younger players are will be much clearer by this point and should give Houston more clarity on their thinking. They will also have other rookies and sophomores to evaluate by then too, including at least a couple of lottery picks you would think, so there are options for the Rockets moving forward.

It's going to be an interesting journey ahead for the next couple of years but most likely a painful one with lots of losses. The important thing with a rebuild, as ever, is keeping the big picture in mind among all of that pain