By Mark Deeks - <a href="https://twitter.com/MarkDeeksNBA">@MarkDeeksNBA</a>

Toronto Raptors forward Pascal Siakam has enjoyed a break-out season and is a leading candidate for the Most Improved Player award. Mark Deeks examines his credentials, along with a number of other contenders.

As the 2018/19 regular season enters its final stages, we can begin to give serious consideration to this season's award winners. And no matter what else happens between now and the very end of the season, some of them look to already be decided.

The Most Valuable Player award seems to be being contested between the isolation-scoring brilliance of James Harden and the Kirilenko-meets-Durant uniqueness of Giannis Antetokounmpo, with Paul George among others staking a strong claim for the third spot.

Luka Doncic of the Dallas Mavericks has all but wrapped up the Rookie of the Year campaign. Mike Budenholzer, the architect of the Milwaukee Bucks' ascension to the top of the East in seven short months, surely has a lock on the Coach of the Year award.

The Cavaliers visit the Bucks on NBA Primetime - watch live on Sky Sports Arena on Sunday at 8:15pm

Somewhat less obvious, though, is the winner the Most Improved Player award. We take a look at some of the stronger candidates below.

Considering the calibre of the team he is on, and his large role in making the team that good, Siakam is perhaps the leading candidate for the Most Improved Player award this season. Last season, Siakam showed enormous growth not just compared to his rookie season, but also in-season as the campaign went along.

Overmatched and hesitant as a post-centric rookie starter, Siakam grew and grew as a sophomore to become a real breath of fresh air off the bench, more freely deploying his quickly-developing perimeter and transition skills, and merrily casting up every open jump shot look he received.

They did not go in much, at all, yet Siakam's relentless energy, enthusiasm and developing skills gave hope for the future. 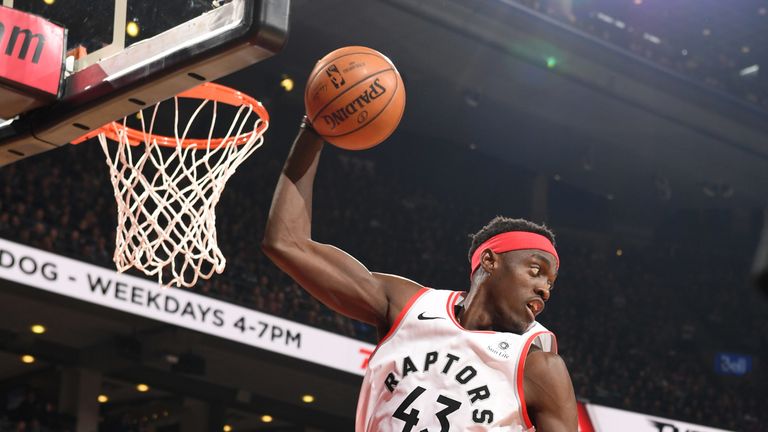 That hope is already being realised. The jumpers go in now, and, paired with his now-excellent handle for a power forward, ability to push the ball and incessant movement, he has turned into a 16.6 points-per-game scorer. With contributions all over the stat sheet and with as much energy defensively as he shows offensively, topped with a layer of exuberance and personality, Siakam has become a vital starter on a title contender.

Bear in mind that when All-Star center Marc Gasol joined the team at the past trade deadline, Siakam was considered too good to bench.

At the crux of the Nets' improvements this season has been the continued development of their excellent backcourt trio, featuring Russell, Dinwiddie and Caris LeVert.

Prior to his serious injury on November 12, LeVert had averaged 18.3 points and 3.7 assists per game, a lot of production to lose. Yet LeVert would have been a much bigger absence had it not been for the excellence that the two-headed point-guard monster formed by these two.

When he first arrived in Brooklyn, Dinwiddie struggled to consistently get inside the arc and finish at the basket, thus too often limited offensively to three-point shots off reset passes or pull-ups. This year, however, Dinwiddie's offensive game has really opened up. 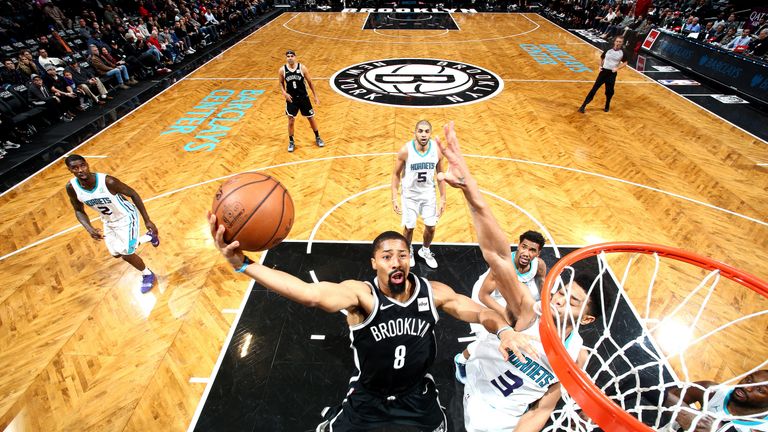 Dinwiddie shines in Nets overtime win over the Hornets

Much more adept at getting to the rim against pressure now, Dinwiddie has added the much greater frequency of dribble-drives to his 35.7 per cent three-point stroke, as well as demonstrating good ball security and playing some decent defense.

With his scoring rising all the way up to 17.4 points per game, and a resume full of clutch shots already to his credit, Dinwiddie's leadership has pushed the Nets' rebuild to the next level.

Russell, though, has perhaps made the bigger improvement. He remains jump shot-centric and a bit inconsistent, with production borne out of volume more than efficiency, yet the former Los Angeles Laker has made big strides in his fourth season to become a game-changing player on his good nights. 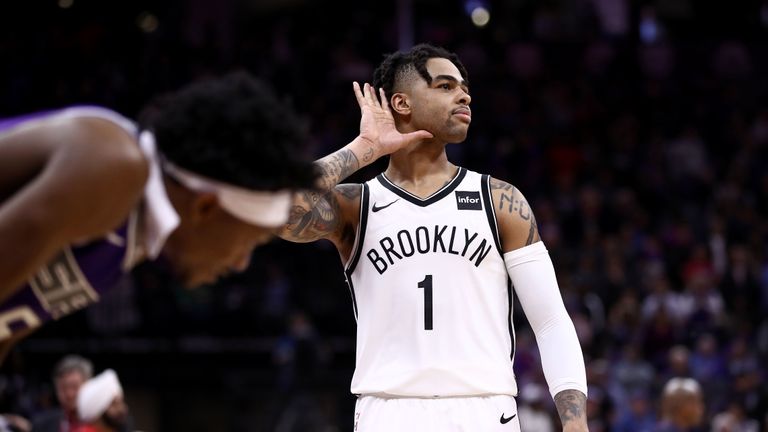 Averaging 20.7 points and 6.9 assists per game, Russell has looked more focused defensively to go with the big scoring uptick, and although his streakiness and inefficiencies mean there is still work to do, there is plenty to build on. Whereas once he was a stat-padder on bad teams, he is now an All-Star on a team considered a tough out in the postseason.

Were there to be such a thing in the NBA as the Comeback Player of the Year award, just as there is in baseball, then Rose would be the surefire candidate to win it.

The one-time MVP has battled six years of various injuries, from the niggling to the serious, that saw him drop out of the league during what should have been his prime years. He still is battling injuries, too, playing in only 51 of the Timberwolves' 71 games thus far and seemingly being a game-time decision every night. Yet in the time he has managed, he has been resurgent. Rose is averaging 18.0 points per game, more than double what he posted last season, and has shown that the old burst of his glory days is still within him. He also has shown better rhythm in his jump shot form than perhaps ever before.
The game-winning 50-point performance in an early season win over the Jazz marked a true return to form for a player sidelined largely through bad luck. And when healthy enough to play, he has been able to sustain it since then.

The Bulls agreed to match the sizeable offer sheet given to LaVine in restricted free agency by the Sacramento Kings last summer, knowing that he would have to improve and become their go-to scorer in order to justify it. And he has.

Guilty at times still of overindulging in 'heroball' in clutch situations, and always wanting to heat-check his jump shot, LaVine has nevertheless made those improvements. He has improved his guile, craft and discipline when it comes to attacking the basket, rather than settling for an excess of pull-up two-point jump shots as has been the case prior. LaVine has also improved his defensive effort somewhat, if still far from being noted for it, and has grown into the end-of-the-shot-clock, isolation-scoring bailout guy that he has always wanted to be, and the Bulls needed him to be.

Even when discounting the abridged run-out he received down the stretch of last season, when he was neither healthy nor at his best, LaVine's numbers this season are still far better than what went before - he is scoring 23.7 points per game in 2018/19, far surpassing the 18.9 point average that marked his best ever season as a member of the Minnesota Timberwolves.

For whatever reason, despite his excellent combination of length and athleticism and the effort level with which he plays defense, Collins has recorded remarkably few defensive statistics this season. The springy big man who recorded 52 blocks in 878 minutes as a college sophomore, then 80 in 1,785 as an NBA rookie, somehow has only 27 to go with 18 steals this season despite 1,574 minutes of play.

The simple counting of steals and blocks is far from a perfect measure of overall defense, yet it does speak to the ability to win possessions, a key part of the process. Nevertheless, Collins's improvements as an offensive player overwhelm any lack of defensive development. The potential jump shot he showed in the second half of last season has become a reality, hitting 36.2 per cent of his three-pointers on two-and-a-half attempts per game, which is also the number of dunks he makes per game.

Running the court, rolling to the rim, taking a couple of dribbles and finding excellent chemistry with rookie passing wizard Trae Young has seen Collins almost double his scoring numbers from last season, up to 19.7 points per game from 10.5 last year in only five minutes more per contest.

Going forward, the duo could be offensively dominant for a decade.

The Clippers re-signed Harrell over the past summer to a very favourable contract and have subsequently watched him break out to become even better value than he already was.

Harrell was always a frenetic barrel of athleticism and energy, as evidenced by his prolific dunk rates, yet he has demonstrated a much more advanced offensive post game to go with that this season, adding skill to the physical dominance. He has upped his scoring, rebounding and blocked shot numbers to 16.5 points, 6.8 rebounds and 1.4 blocks per game, up from 11.0/4.0/0.7 last season respectively, and in addition to the Most Improved Award, Harrell - who has only started four games all season - is also in the running for the Sixth Man of the Year award, too.

Having gone all in trying to win titles in the second LeBron James era, and managing it once, the Cavaliers do not have a lot of young players to give minutes to now that they are back in the deep lottery once again.

Osman is one, however, and he leads the team this season in starts (65) and ranks second in minutes played (2,110 thus far). 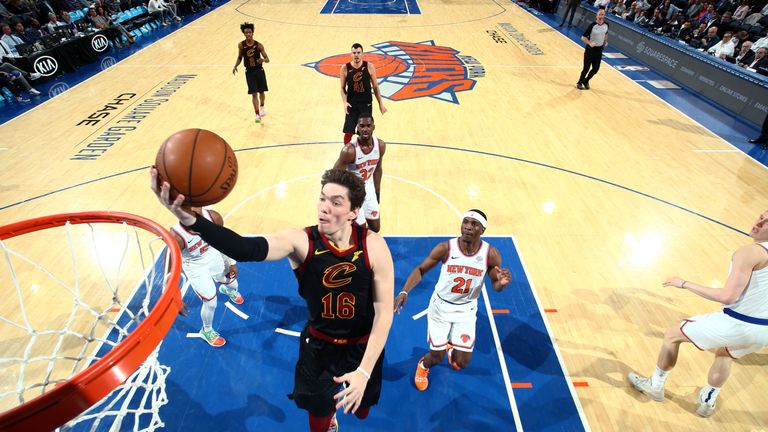 A prolonged two-month shooting slump across November and December tanked the numbers of what could have been an excellent overall season; nevertheless, now that he has gotten his shot back, Osman has averaged 14.9 points, 5.4 rebounds and 4.0 assists per game after the All-Star break.

The winner of the Most Improved Player award does not have to be someone on the ascent to All-Star status; a player becoming an excellent low-maintenance off-ball two-way role player can have excellent credentials as well.