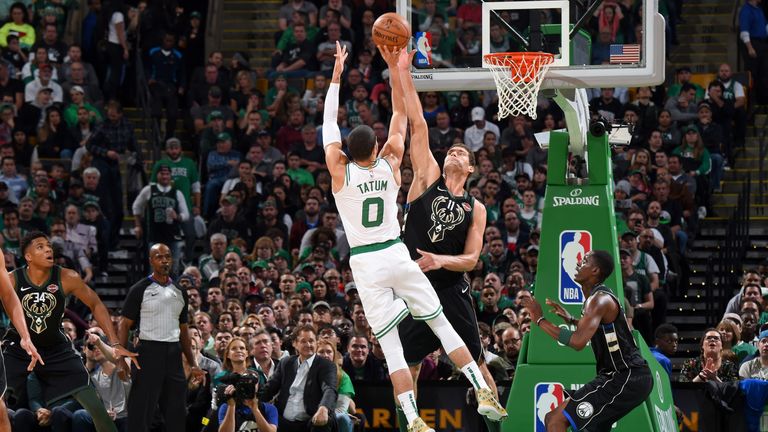 Highlights of the Milwaukee Bucks' visit to the Boston Celtics in Week 3 of the NBA.

The Boston Celtics nearly blew a 15-point fourth-quarter lead but took advantage of a missed free throw by Eric Bledsoe with 12.8 seconds left to hand the visiting Milwaukee Bucks their first loss of the season, 117-113.

The Celtics used three-point shooting to begin each half with a dominant run, allowing them to lead most of the way en route to their fourth straight win.

But while the Celtics were missing their last six shots and mixing in a turnover, the Bucks rallied from a 113-104 deficit with 3:48 remaining in the fourth quarter to get within 113-111 before Bledsoe missed his first of two free throws after stealing the ball from Jayson Tatum and getting fouled with 12.8 seconds to go.

Bledsoe made his second shot to get the Bucks within one, and the Celtics' Kyrie Irving then hit two free throws to make it 115-112.

The Celtics fouled Giannis Antetokounmpo with four seconds left, and he intentionally missed his second foul shot after making the first. Boston's Al Horford got the rebound and dropped in two clinching free throws with 2.5 seconds to go.

Irving buried six three-pointers to account for the majority of his team-high 28 points.

The Celtics bombed in 24 threes in all, outscoring Milwaukee 72-27 from beyond the arc to send the Bucks to their first loss after seven wins.

After the Bucks had overcome a 16-7 game-opening burst by the Celtics to draw within 55-53 at half-time, Boston got three three-pointers from Irving and one apiece from Tatum and Horford in a 19-8 run at the start of the third period that opened a 74-61 lead.

The Celtics went on to lead by 15 at quarter's end, then held on after the Bucks got within 98-95 with still 8:19 to go and then within one in the final seconds.

Horford and Gordon Hayward had 18 points apiece and Marcus Morris 17 for the Celtics, who swept a two-game homestand that began with a win over Detroit on Tuesday.

Antetokounmpo was the game's leading scorer with 33 points and leading rebounder with 11 for the Bucks, who were playing just their third road game of the season.

Malcolm Brogdon and Khris Middleton had 16 points each, and Bledsoe 13 for Milwaukee.