Watch the 2019 NBA All-Star Game, live on Sky Sports Arena in the early hours of Monday morning (1am) 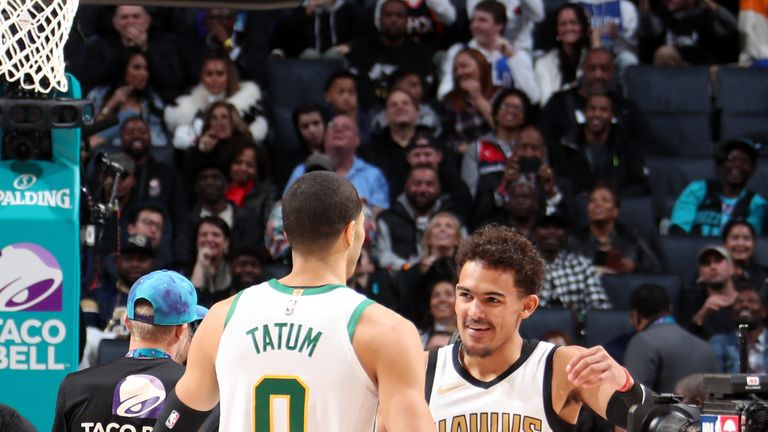 Watch the All-Star Game, live on Sky Sports Arena in the early hours of Monday morning (1am)

Young made the finals but was edged out when Tatum launched a shot from 35 feet and banked it home.

WOW. 😱@jaytatum0 pulled up from half-court to win the #TacoBellSkills challenge! pic.twitter.com/C9aM8mSVnF

"Trae was already ahead of me," Tatum said. "I just tried to have fun. Threw one up, and it went in."

On Friday night, Tatum scored 30 points and finished as runner-up in the MVP voting to the Los Angeles Lakers' Kyle Kuzma in the Rising Stars game. Both Tatum and Kuzma were part of the winning US team that beat the World team.

Once they hit the three-point arc at the opposite end, they must fire a chest pass through a narrow cylinder, then pick up another basketball under the hoop before sprinting the distance of the court to make a lay-up or dunk.

From there it's a footrace to the opposite end of the court. The first player to make the top-of-the-key three-pointer wins.

Players didn't practice the course, and Tatum said the chest pass was the hardest part. "That's harder that it looks," he said.

Nuggets forward Nikola Jokic lost to Tatum in the semi-finals, missing his three-pointer as Tatum's dropped from the left side of the key. Young sprinted ahead of Mavericks rookie Luka Doncic and banged in a winner off the glass before Doncic's first attempt clanged off the rim.