Elena Delle Donne: Is the Masked Mystic on course to be MVP?

The 'Masked Mystic' has combined her own exceptional form with an example-setting leadership to superb effect.

You hear the words tossed around in press conferences after WNBA games - or any team sport for that matter - the leader "sets the tone".

However, that is exactly what Elena Delle Donne did in a win against the Atlanta Dream on Sky Sports Arena on Sunday. She scored 12 points in the first quarter to put her team up 24-15 but, beyond that, the way she did it showed why the 2015 MVP is on her way to winning a second this season.

She has missed a few games for the Washington Mystics in 2019, and her stats are among the lowest of her career - almost across the board - yet her team is battling for a top seed and a return to the WNBA Finals. Why? Because Delle Donne sets the tone.

Last year, she showed how to lead by example after a scary knee injury. Against Atlanta in the semi-final, her team was down 2-1 but she returned to the line-up and helped get the win and extend the series to a fifth game, which the Mystics bagged for a trip to the finals.

And then, despite some superb moments against Seattle, the Storm proved too much for our hero. But even in a knee brace that looked heavier than her, Delle Donne showed how capable this team was. That’s why head coach and general manager Mike Thibault opted to largely run it back for the Washington Mystics this season.

With Delle Donne and Kristi Toliver locked up for 2019, the growth of players like Ariel Atkins, Natasha Cloud, Shatori Walker-Kimbrough and LaToya Sanders last year made them the priorities to re-sign in the offseason. Highlights from the WNBA as Atlanta Dream took on Washington Mystics

But that 2018 team still missed out on a handful of pieces, including the excellent Emma Meesseman. The Belgian forward/center sat out last year to focus on the World Cup with her national team, and to great effect: Belgium finished a best-ever fourth in the tournament.

Thibault compared Meesseman’s return to Washington as one of the best acquisitions of the off-season, because when Delle Donne got injured, the team had essentially no back-up scoring big. Now that Meesseman has returned, it solidifies that position.

The only other addition Thibault considered was another shooter to spread the floor. Meesseman’s Belgian team-mate Kim Mestdagh has filled that role adequately, and while she has only logged four games so far this season after not starting with the team due to EuroBasket commitments - and largely garbage minutes so far - she has made a three-point shot in every one, and her good perimeter defense is proving a useful, deep pull off the bench.

Delle Donne has missed three games this season, one due to the formerly injured knee to start the year and another two after breaking her nose against the Los Angeles Sparks. To return to action, she pulled on a mask to protect her face, and it is giving her superpowers. Looking like Batwoman in the first two games back from injury, Delle Donne has hit seven of nine from three, sunk all nine of her free throws, has scored 56 points and grabbed 23 rebounds. After the win on Sunday she spoke about the mask: “It feels great, and it’s not affecting my vision at all.” 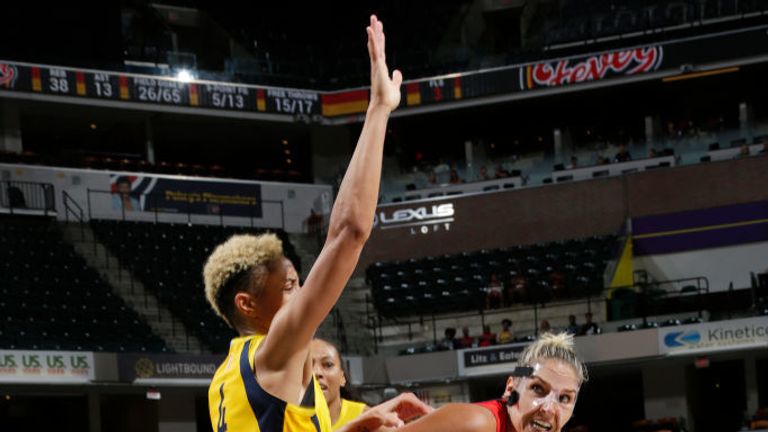 Highlights from the WNBA as Washington Mystics took on Indiana Fever

Delle Donne scored from the post, beat defenders off the dribble, filled lanes on the fast break and had a handful of stare-down ‘why is no one guarding me?’ threes.

The style of her heroics is one thing, but this team has Kristi Toliver.

Having won a title with another elite do-everything forward/center in 2016, alongside Candace Parker on the LA Sparks, Toliver is used to being a secondary leader and thrives on picking up the slack or doing the dirty work. She wasn’t credited with any steals against the Dream, but Toliver was often the second defender who helped and got her feet in position to cause a fumble that team-mates like Walker-Kimbrough and Aerial Powers capitalised on. Toliver also handed out seven assists, many of them to Delle Donne, and was +17 for the game despite missing six of her eight shots. Delle Donne might have set the tone, but Toliver enforced it.

Delle Donne might be averaging the lowest scoring output of her career at 17.5 points per game, but she is still fourth in league leaders. This is also in a season when scoring is down across the league. In fact, the league is scoring its lowest average since 2015. In 2017, eight of the 12 teams were averaging more than 80 points per game, and 2018 was much the same.

Who's setting the pace in the WNBA?

This season, just two teams are managing to break that barrier, and the Washington Mystics are leading the league with 85.9 points per game, more than four points better than their nearest rival. One way to counteract the lower scoring is by making shots at a better rate than your opponent. 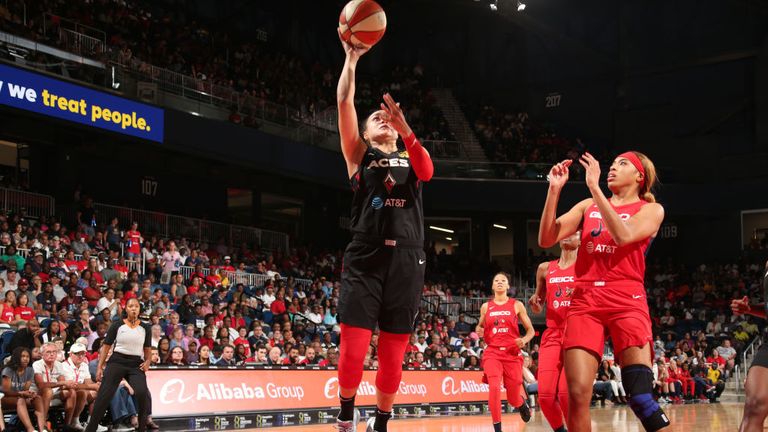 Delle Donne is just a few points away from hitting 50 per cent of her field goals, she is hitting 40 per cent from distance and a ridiculous 97 per cent from the free-throw line. And the team is joining her, with Washington averaging the highest field-goal percentage in the league so far this season.

The masked Mystic is setting the tone, and her team has assembled accordingly. This is why they are on their way to another Finals appearance, and it is why Delle Donne should win another MVP award.