Coverage of the NBA continues on Sunday night as the Boston Celtics take on the Phoenix Suns, join the Heatcheck from 7pm for a YouTube watchalong or on Sky Sports Arena

Michael Jordan and Scottie Pippen comparisons are blasphemy to some. Even putting them on LeBron James and Dwyane Wade's level is a tad too far. Or is it?

Jayson Tatum and Jaylen Brown are both under 24. They are still three or four years away from their peak. But they are both becoming the go-to players for the Boston Celtics after years of Danny Ainge - general manager and president of basketball operations - surrounding the fledgling stars with big free agents like Gordon Hayward and elite point guards such as Isaiah Thomas and Kyrie Irving.

We remember Jordan and Pippen at their most powerful - not battling for shots with Orlando Woolridge or Dave Corzine, but at their physical and mental peaks while they were winning championships. And the same goes for James and Wade when they were in their late-20s and rounding out into veteran superstars.

Tatum and Brown’s success at this early stage of their careers might be putting them on track to become one of the great guard-forward combinations of all time.

Tatum came into the NBA as the player of the future - perhaps not on Jordan’s or James’ level at that stage, but with a high ceiling. After scoring 13 points with five rebounds and one assist as a rookie, in this fourth season he is averaging 26, seven and three.

More impressive is his effective field goal percentage this year is 55.7 per cent - a career-high, despite the increased responsibility, being used in 31.2 per cent of his team’s plays when he is on the court, compared to just 19 per cent as a rookie. 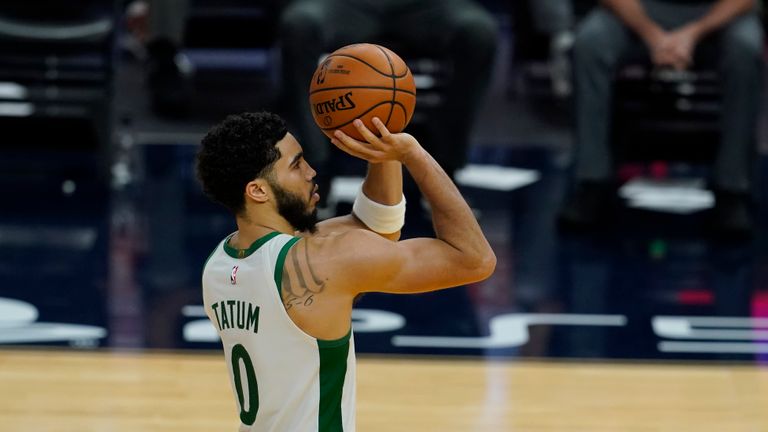 Brown, meanwhile, started out a season earlier but with numbers that would suggest a future as a great role player or even a second best player on a good team. Six points, two rebounds and nearly one assist per game in 2016-17 might not seem like much looking back, but it was on a team that went to the Conference Finals and had plenty of weapons geared to enhance other players.

As an uber Boston Celtics fan, The Ringer’s boss Bill Simmons regularly said during Brown’s second season that his development was not dissimilar to that of Paul George, who has since been a regular All-Star and is now the second best player on what many consider to be a championship contender in the LA Clippers.

Brown, however, is battling to be the Celtics' leading scorer, averaging just 0.4 points per game behind Tatum while grabbing five rebounds and three assists, as well as enjoying a usage rate of 31 per cent. At times this year, Brown has looked like the best player on the court.

Rather than being cast as the Robin to Tatum’s Batman, some are reconsidering which player might be the lead. 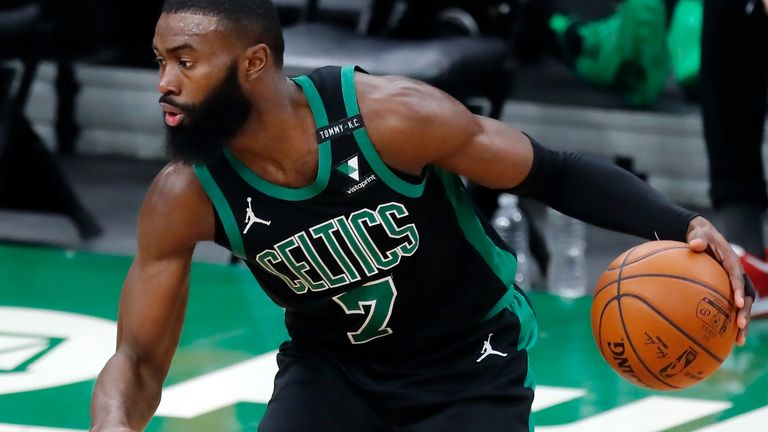 At 26.4 and 26.8 points per game, respectively, the pair is currently in the top 15 in scoring - the Brooklyn Nets can’t even boast this, despite their superstar scoring trio.

It’s not uncommon for a duo of team-mates to do this in NBA history but more often than not, it is a signal of success. Since the 2010-11 NBA season, 12 teams have had two players in the top 15 scorers, and nine of them went to the Finals. Of those teams that didn’t reach the Finals, almost all of them made it to the Conference Finals - apart from Russell Westbrook and James Harden on last season’s Houston Rockets.

Doing it on both ends

What makes the combination extra special is their defensive ability. Their height, build and switchability means they can defend shooting guards, small forwards and power forwards. Brown averages around 47 per cent of his time defending guards and the same against forwards, whereas Tatum plays 50 per cent guards and 45 per cent forwards.

With factors such as partial possessions, switching, hedging and different zone schemes, it’s more difficult to analyse specific defensive stats for individual players - especially this early into a season when teams are playing each other more often in a shorter time frame to reduce coronavirus exposure.

All of this means you have to watch the game, and when you do, you see a team-defense approach. Against the Golden State Warriors earlier this week, Celtics point guard Kemba Walker was mainly guarding the opponent’s dangerman Steph Curry.

Throughout his career, Walker has never been a top defender. But it is quite possible he's an underrated one. 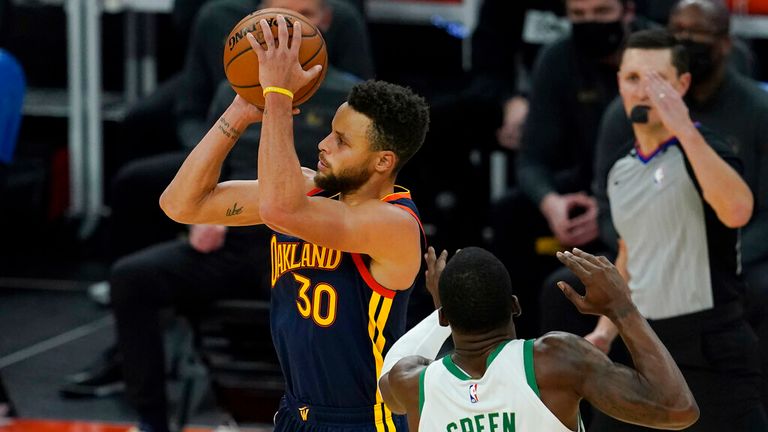 His lack of size, length and instincts on that end of the court means he's not on the level of Kyle Lowry of the Toronto Raptors or Dejounte Murray of the San Antonio Spurs, two great defensive point guards. But Walker’s limitations can be covered up on this team thanks to Tatum and Brown’s ability to guard perimeter players, along with one of the single best defensive players in the league in Marcus Smart when he’s healthy.

Additionally, head coach Brad Stevens schemes well for opponents. We saw periods of 2-1-2 zone against the Sacramento Kings on Wednesday, during which Brown and Tatum would see time operating in the backcourt role, even if Brown spent more time covering the corner and the baseline. It was employed to slow down a high paced offense led by De’Aaron Fox that caused issues for the Celtics, but to no avail. 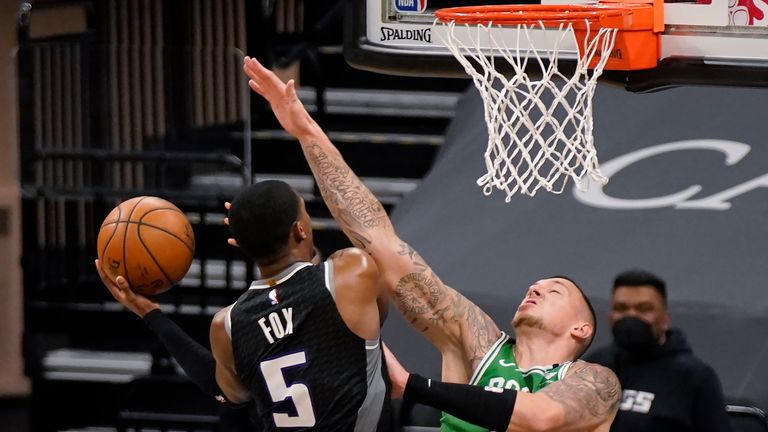 Whereas, earlier in the week, Stevens deployed more of a man-to-man strategy and Walker played Curry as well as possible in isolation while having good team support away from the ball. Curry still scored 38 - sometimes, greatness just can’t be stopped - but the Celtics came away with a win.

There are a handful of big guys that need to be schemed for too, like Nikola Jokic, Anthony Davis, Joel Embiid and Bam Adebayo, but Brown and Tatum will probably have the tougher assignment on most nights in the NBA.

The Celtics will always defend as a team, and the switchability of Tatum and Brown means that neither will ever guard any one of those top guys for 100 per cent of their possessions in one game. If they did, it could possibly impact their performance on the offensive end of the court (this is why we have seen Harden and Beal become so resigned on defense in recent years).

There is a cost to carrying a team, and if the pair weren’t able to split the responsibility of guarding the best player throughout any given game, it could zap their energy on offense and reduce the options and variety that the Celtics need to achieve at the highest levels.

The difference between the most successful high scoring duos in NBA history and Jayson Tatum and Jaylen Brown is that the best multiple-time champions had an outright leader.

In their first year together on the Miami Heat, LeBron James and Dwyane Wade fell short. Wade admits to this day that he tried to be the main guy during the 2010-11 season, but the chemistry was off going into the 2011 Finals. They had to reassess after being embarrassed by Dirk Nowitzki and the Dallas Mavericks.

The next year, the Heat were James’ team - maybe not to the city of Miami, but definitely on the court - and they won back-to-back championships.

There was never any question as to who was the leader on Michael Jordan’s Chicago Bulls - Scottie Pippen was always Robin. And when you look at the top-scoring duos from the past 10 years, the championship winners always knew who was boss: Klay Thompson got the shots that Curry wasn’t taking in 2014-15; Anthony Davis might have had the bigger scoring responsibility on last year’s LA Lakers but James was still in charge; a similar dynamic to when Kevin Durant was the main scorer on the 2016-17 Golden State Warriors but Curry was still the leader of the franchise.

The rest of the list sees the likes of Durant and Russell Westbrook feature regularly from their days on the Oklahoma City Thunder, which always felt like an awkward tug of war over who was leading the team and where the ball would go during key possessions.

James and Kyrie Irving featured in the league’s top 15 scorers together twice when they were on the Cleveland Cavaliers. The year it was just James in the top 15 the team won a championship.

Without being present in the locker room from one day to the next, it’s difficult to determine the dynamics of internal leadership, but the public perception of a team’s hierarchy is often linked to how successful they are: Shaquille O’Neal was directly identified as the top dog by his team-mates, the coaching staff and the media - even if Kobe Bryant wanted more recognition and glory, his time as the outright leader would come later.

Brown is clearly a thoughtful person with a strong voice and good leadership skills off the court - as demonstrated in last year’s social justice movements and as reported by Josh Coyne last September.

Tatum has always had an innate ability to take over a game though - that is something Brown has developed this season - and you can see where he has modelled his game after Bryant over the years.

Skills trainer Gary Maitland has been present at Tatum’s private workouts with Drew Hanlen, and in 2018 he said: “When they’re in, it’s business. There’s something about Jayson that stood out. His moves are so sharp and calculated and his decision making is crazy.

Both players are clearly driven and maybe running things by committee will work for this duo. Teams can have their production leader and their emotional leader as separate players, and with Tatum and Brown under contract until at least 2023-24, there is still plenty of time to work out the details of who speaks when and where the shots are coming from.

They are already proving excellent individually in a system that is designed for their games to flourish. Success this season could put them on a path to challenge the likes of Wade and James as an all-time great perimeter pairing, or - dare I say it? - maybe even Jordan and Pippen.

Who will be who?