Are Utah Jazz the real thing? B.J. Armstrong breaks down their case as championship favourites

Utah are sitting pretty at the top of the standings and have the easiest run-in of every team in the NBA; first seed seems an inevitability, as do individual awards for coach Quin Snyder and sixth man Jordan Clarkson; one question remains: will it translate to success come the playoffs?

The Utah Jazz are 27-7, comfortably the best record in the league. They are third in offensive rating and second in defense, equating to the top net rating by quite some margin. Over the past 15 games, only the Phoenix Suns and Milwaukee Bucks come close and even then, they're still not very close at all.

The Jazz also recently completed the toughest ten game stretch of their season. They went 8-2, defeating some of the best teams in the East - the Pacers, Celtics, Bucks, Heat and Sixers - in a row.

In fact, the two games they lost were to teams they also beat in the run, with one the second night of a back-to-back against the Clippers. They beat LeBron and the Lakers by 25 points.

If now isn't the time to take them seriously, when is?

In terms of schedule strength until the post-season, they now have the easiest run-in in the NBA. First seed seems an inevitability.

They're also first in made threes, a hallmark of all great teams in the modern pace and space era. Even better, they're making them at an exceptional clip of 40 per cent. Their average scoring margin is +10 points. The Bucks are in second with +7.5, with the Suns and Clippers tied in third at +6.

Statistical analysis website FiveThirtyEight lists the Jazz as championship favourites, giving them a 19 per cent chance of the first title in Utah's history. That might not sound like much but given the Lakers and Nets sit at 12 per cent and 10 per cent respectively, it's a hell of a lot.

Former All-Star and Heatcheck analyst B.J. Armstrong believes that the Jazz's play through the first half of the season has forced us to look at them through a championship lens. 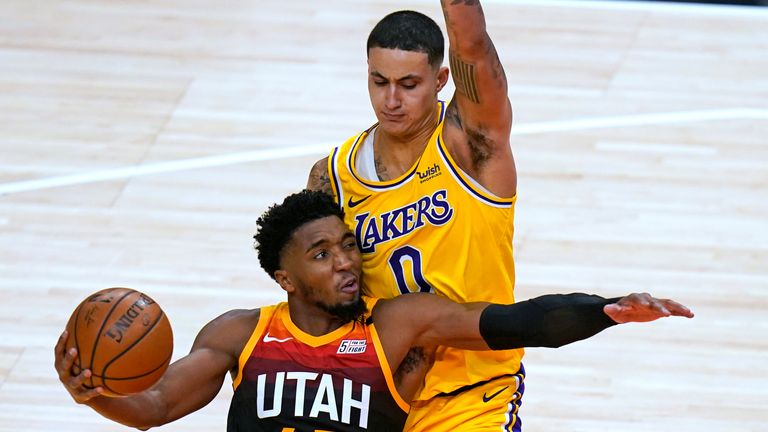 Highlights of the Los Angeles Lakers against the Utah Jazz in Week 10 of the NBA.

That being said, the three-time champion with the Chicago Bulls did temper expectations slightly.

"Right now, they are currently the best team in the NBA. But I would caution this team to understand the following: there's a lot of basketball still to be played.

"In saying that, we still have to ask the following: Do they have a roster that can win the final game of the season?

"They've got to figure out how to win 16 games in the postseason with the expectation now. People are beginning to ask that question. Now all of a sudden you're saying 'Can they do it?'" 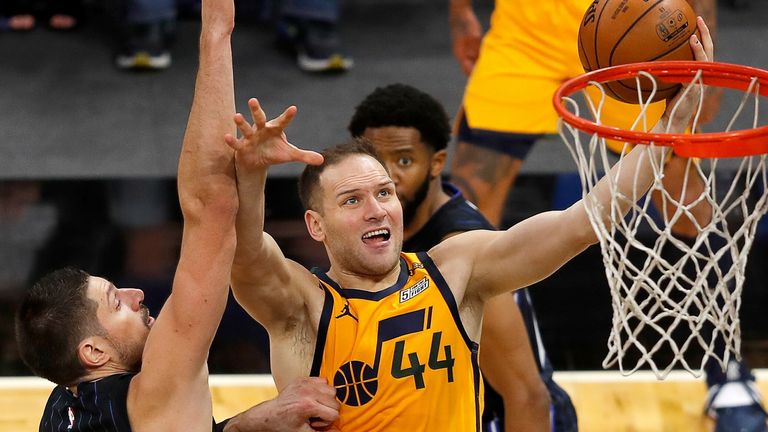 Highlights of the Orlando Magic against the Utah Jazz in Week 10 of the NBA.

For a start, they will have to go through the defending champion Los Angeles Lakers. For all the world it has the feel of a Western Conference Finals match-up, but given the Lakers' patchy recent form without Dennis Schroder and Anthony Davis, who remains out with an Achilles injury, they could potentially meet one stage earlier in the playoffs, with the Jazz having crucial homecourt advantage.

"The Lakers have been there, done that. The Lakers right now are a team that feel that they can go win on the road, they have not one but two players in LeBron James and Anthony Davis who can take over a game at any given time. Take over a series. And as long as they are healthy, they'll feel like they can win a game when they need to.

"Anytime you have LeBron James on your team you always have a chance."

On paper at least, the Jazz are more than a match for a Lakers squad many expected to cakewalk their way to another championship. With LeBron that is of course still very much in play, depending on the fitness of Davis, but a best-of-seven series starting in Salt Lake City would make an extremely difficult path to the finals.

The other factor in Utah's surge to the top of the Western Conference standings is the health of the team, or as B.J. puts it, the fact their core has been more available than any other.

"With the exception of Mike Conley, they're probably the healthiest team, or at least the most available team thus far during the season. That has been a huge factor for them.

"They don't go eight, nine, 10 into their rotation. But their six or seven guys are as good as anyone in the league."

The likes of Royce O'Neal, Bojan Bogdanovic, Joe Ingles and Derrick Favors are all important contributors, whilst Jordan Clarkson has been lights-out offensively off the bench, even pouring in a 40-point performance during the 134-123 victory over the Sixers.

Even so, Armstrong believes that superstar-in-waiting Donovan Mitchell is the key to any playoff success that the Jazz hope to achieve.

"As they are looking to go deep in the playoffs I think it's important for Donovan Mitchell to be the lead guard for this team.

"The reason being is that Donovan Mitchell is what the new NBA is all about. You must have a lead guard who can play downhill. Meaning he can attack the basket, he'll have the ball in his hands primarily which will keep him in the triple threat position.

"Put the ball in his hands. Live with those results."

It may seem like a distant memory now, but Mitchell announced himself to the world with his performances as a rookie in a debut play-off series against the Oklahoma City Thunder in 2018. Still just 24, that premature experience under the bright lights of the postseason could prove invaluable.

Mitchell broke Michael Jordan's record for points for a shooting guard in their first two postseason games and is behind only Kareem Abdul-Jabbar and Wilt Chamberlain for most points by a rookie in their first six play-off performances, historic company to be in. He already has the crunch time chops on his résumé.

Then there's Quin Snyder, the man responsible for instilling in this ball club the unselfishness and work ethic it has since become renowned for. He's the runaway - perhaps only - candidate for Coach of the Year.

"Every year Quin's name is in there but because of the win/loss record you have to put him at the top of the Coach of the Year list. He's done a really terrific job in light of everything that's going on off the court. This hasn't been easy for any coach to coach under these circumstances.

And finally, as for the adoration, heightened expectations and general buzz surrounding Utah this season?

"They deserve that now. They've shown that they can beat all the teams in the NBA. But can they do it when it counts? That can only be answered once the playoffs begin."