Live coverage of the NBA continues on Thursday night, as the race for the playoffs continues with the Portland Trail Blazers @ Phoenix Suns - join us from 3am on Sky Sports Arena Los Angeles Lakers left it late to secure an important victory over the Houston Rockets as the battle to avoid the Play-In Tournament in the Western Conference continued with wins for the Dallas Mavericks and the Portland Trail Blazers.

The trio occupy the fifth, sixth and seven spots and after all three claimed very different victories on Wednesday night, the drama looks set to go all the way to the final games of the regular season.

Dallas and Portland remain in control of their own destiny after their victories to sit fifth and sixth in the standings, while the Lakers - who lifted their 17th Championship banner before the game - needed Kyle Kuzma to come up with a winning basket and Wes Matthews with a key defensive play in the dying seconds to secure victory.

Wes Matthews pokes it away and THT recovers it to secure the @Lakers home W! #LakeShow pic.twitter.com/93JAaTcghB

In the Eastern Conference, Atlanta and New York confirmed their play-off spots - the Hawks beat Washington to return to the post-season for the first time since 2017 while the New York Knicks ended an eight-year drought when Boston were beaten by Cleveland.

It means the Knicks are in the playoffs for the first time since 2013 and that the six spots in the East are confirmed, with the race for Play-In Tournament outstanding ahead of the final nights of the regular season.

The @ATLHawks and @nyknicks each clinch an #NBAPlayoffs berth!

Teams ranked 7-10 will participate in the #StateFarmPlayIn Tournament after the regular season (May 18-21) to secure the final two spots in the Playoffs for each conference. pic.twitter.com/Jttww34CvB

The New York Knicks are headed to the Playoffs. #NewYorkForever pic.twitter.com/kpp3Pu3RJr

Kyle Kuzma drove for the decisive layup with 6.9 seconds remaining to give the Los Angeles Lakers a 124-122 victory over the visiting Houston Rockets.

The Lakers played without LeBron James (ankle) for the 26th time in the past 28 games while Anthony Davis (adductor) also sat out - although both were present for the banner unveiling ahead of tip-off following their 17th Championship title last year.

Getting close but I won’t be in the lineup tonight but more importantly I will be there to put that CHAMPIONSHIP banner in the rafters at Staples Center in front of our fans!! #No17 💜💛

It might be a tougher path for the Lakers this year, despite victory they remain one game behind the Dallas Mavericks and Portland Trail Blazers as it bids to avoid the play-in round. They face Indiana and New Orleans in their remaining games but need Dallas or Portland to slip up.

Houston's chance to win was thwarted when Wesley Matthews forced Kelly Olynyk to fumble the ball. Horton-Tucker recovered it and was fouled, splitting two free throws with 0.9 seconds left, missing the second on purpose.

Armoni Brooks scored a career-best 24 points and Olynyk also had 24 for Houston (16-54), which has lost seven straight games and 44 of their past 49. Kenyon Martin Jr. added 20 points and 10 rebounds.

#LakersFamily, this is for you.

Damian Lillard scored 30 points, CJ McCollum added 26 and the Portland Trail Blazers led the entire second half en route to a 105-98 win over the Utah Jazz in Salt Lake City.

Carmelo Anthony also played a key role in the victory with 18 points off the bench to help Portland (41-29) earn its fifth straight win and a ninth victory in 10 games that keeps them in control of their own destiny in the race for the fifth and sixth seed spots. Jordan Clarkson had another nice entry for his Sixth Man of the Year bid with 29 points to lead the Jazz, who struggled to a higher degree than usual in the absence of injured All-Star guards Donovan Mitchell and Mike Conley.

The Jazz (50-20) saw their lead over the second-place Phoenix Suns (48-21) slip to one and a half games in the race for the No. 1 position throughout the playoffs. The Suns face the Blazers on Thursday night.

Utah finishes the regular season on the road this weekend against the Oklahoma City Thunder (Friday) and the Sacramento Kings (Sunday).

Rudy Gobert had a solid showing for the Jazz with 15 points and 20 rebounds, but Utah shot just 41.2 percent overall and 12 of 40 (30 percent) from 3-point range as they lost a second game in a row following a five-game winning streak.

Utah had a 32-24 lead early in the second quarter before things took a turn for the worse. Portland steadily chipped away and managed to take a 59-56 halftime lead thanks to a last-second McCollum jumper and it was a lead they never relinquished.

The final score was a bit misleading at the Blazers were ahead by double figures until the final 16 seconds and in complete control the entire fourth quarter.

Luka Doncic scored 33 points as the host Dallas Mavericks moved closer to clinching one of the top six spots in the Western Conference and eliminated the New Orleans Pelicans from play-in contention with a 125-107 victory. Doncic bounced back from a 12-point, 4-of-16 shooting performance in a loss at Memphis on Tuesday to score 17 points in the second quarter as Dallas started the period with a 26-5 run on their way to a 77-58 halftime lead.

The Mavs increased the lead to 31 points in the third quarter and held a 111-80 lead at the end of the period as they went on to close out a dominant win, a fifth victory in their last six games

All gas. No brakes. ⛽️ pic.twitter.com/y1dCvsi4D8

Tim Hardaway Jr. added 27 points, Kristaps Porzingis returned from a seven-game absence due to right knee soreness to score 19 and Dwight Powell had 12 points as Dallas (41-29) remained in fifth place in the West - narrowly ahead of Portland and the Lakers, who both won on Wednesday night. James Harden collected 18 points, 11 assists and seven rebounds in his return from a strained right hamstring as the Brooklyn Nets posted a 128-116 victory over the San Antonio Spurs in New York.

Harden came off the bench for the first time since April 22, 2012, when he was a member of the Oklahoma City Thunder and he played under a minutes restriction following an 18 game absence since April 5. After spending most of the game facilitating others, Harden - who played just over 25 minutes in total - scored 10 points in the fourth quarter, including a 3-pointer with 1:53 left that gave the Nets a 122-108 lead that essentially sealed the victory.

The Nets (46-24) won their third straight and moved within one and a half games of the top-seeded Philadelphia 76ers while also inching the same total ahead of the Milwaukee Bucks in the race for the No. 2 seed.

Landry Shamet led the Nets with 21 points on a night when Kyrie Irving sat out after sustaining a facial contusion in Tuesday's win at Chicago.

Nicolas Claxton contributed a career-high 18 points, Jeff Green added 16 and Kevin Durant and Bruce Brown chipped in 14 apiece as the Nets shot 60.8 per cent from the floor and handed out 33 assists.

Kevin Love posted season-highs of 30 points and 14 rebounds as the host Cleveland Cavaliers snapped an 11-game losing streak with a 102-94 victory over the Boston Celtics. 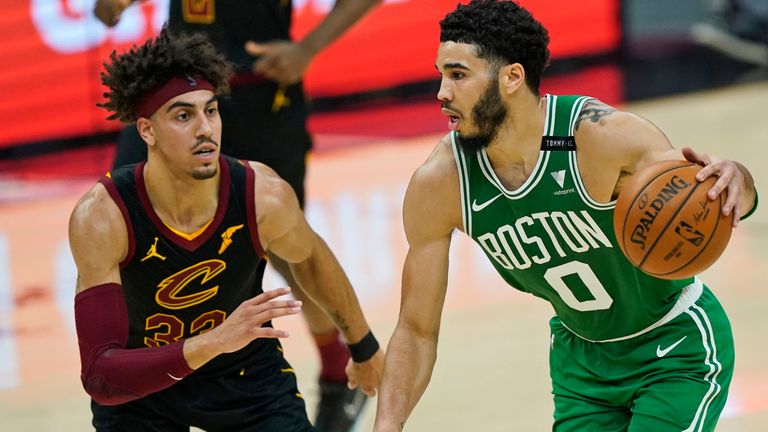 Love finished 10-for-16 from the floor, including 6 of 9 from three-point range. Cleveland (22-48) came into the contest with the longest active losing run in the NBA, but a stout defensive effort and a 14-2 fourth-quarter run ended the Cavaliers' slide while extending Boston's to four successive defats

The Celtics (35-35) lost for the fifth time in their last six contests, scoring their fewest points since registering just 91 points against Washington in February. Defeat leaves the Celtics three and a half games behind Miami and New York in fifth and sixth place with just two games remaining

Boston's lead over eighth-and-ninth-place Charlotte and Indiana who both play the first of their remaining three games on Thursday night.

They shot a dismal 36-for-101 from the floor with Jayson Tatum top scoring with 29 points on 11-of-26 shooting, Evan Fournier finished with 15 points on 6-of-20 shooting, and Payton Pritchard came off the bench for 15 points on 5-of-13 shooting. With Love erupting for all but two of Cleveland's made three-pointers, Collin Sexton delivered 28 points, primarily inside the arc and at the foul line. His 13 made free throws on a career-high 16 attempts paced the Cavaliers on a 22-of-27 night from the foul line.

John Collins drilled a go-ahead three-pointer with 24.8 seconds left to complete an Atlanta Hawks comeback and a 120-116 victory over the visiting Washington Wizards that secures a return to the playoffs.

The Hawks (39-31) won for the fifth time in their last six games and moved a half-game ahead of Miami (38-31) and New York (38-31) in their battle for the No. 4 playoff spot in the Eastern Conference, which carries with it home-court advantage in the first round. 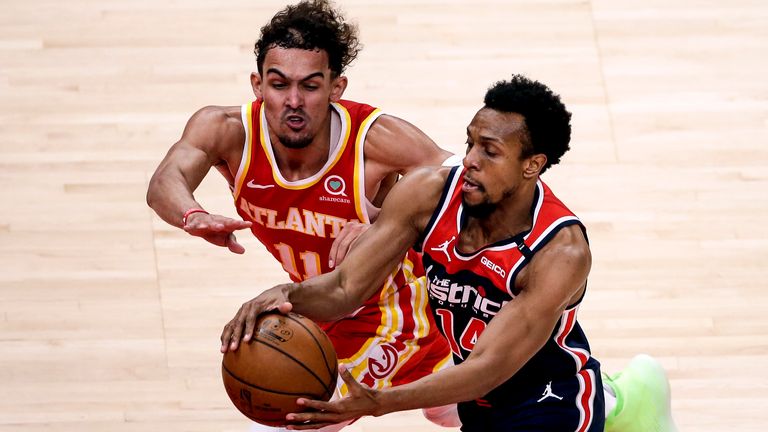 Meanwhile, the loss prevented the Wizards (32-38) from clinching a spot in the Eastern Play-In Tournament, keeping Chicago (29-40) alive. Washington also lost a half-game to Charlotte (33-36) and Indiana (33-36) in their duel for the eighth, ninth and 10th play-in berths.

The Wizards, playing once again without injured Bradley Beal, rallied from an eight-point, first-quarter deficit and turned it into as much as a 13-point lead late in the third period. Seeking a fifth win in their last six games, the Hawks scratched back within 116-114 on a Bogdan Bogdanovic three-pointer with 2:33 to play, before both teams went cold.

With the Wizards leading 116-114, they failed to score in the game's final 2:43, handing Atlanta four chances to tie or go ahead, but two turnovers and missed 3-pointers by Bogdanovic and Trae Young allowed Washington to retain a narrow advantage until Collins connected on his lead-changing 23-footer.

Raul Neto could not connect on a short jumper that would have put Washington back in front with 16.7 left, after which Solomon Hill buried two free throws and Kevin Huerter one to account for the final margin of victory.

Young paced Atlanta with 33 points and nine assists. Bogdanovic finished with 20 points, Collins 18 and Onyeka Okongwu 11, while Clint Capela recorded a double-double with 17 points and a game-high 11 rebounds.

Russell Westbrook, who had recorded triple-doubles in each of his previous five games, put up game-highs in points with 34 and assists with 15, but had just five rebounds for the Wizards, who have gone just 5-5 in their last 10 games.

Want to watch even more of the NBA and WNBA but don't have Sky Sports? Get the Sky Sports Action and Arena pack here