Diana Taurasi became the first WNBA player in history to reach 9,000 points as she led the Phoenix Mercury to victory over the Los Angeles Sparks on Sunday night.

Taurasi returned from a nine-game absence due to a fractured sternum to score a game-high 25 points and make WNBA history as the host Mercury defeated the Sparks 88-79.

Brittney Griner added 22 points and eight rebounds, Skyler Diggins-Smith scored 16 and Kia Nurse 13 for the Mercury (7-7). Phoenix had lost four in a row before defeating the host Sparks 80-66 in their last game on June 18. 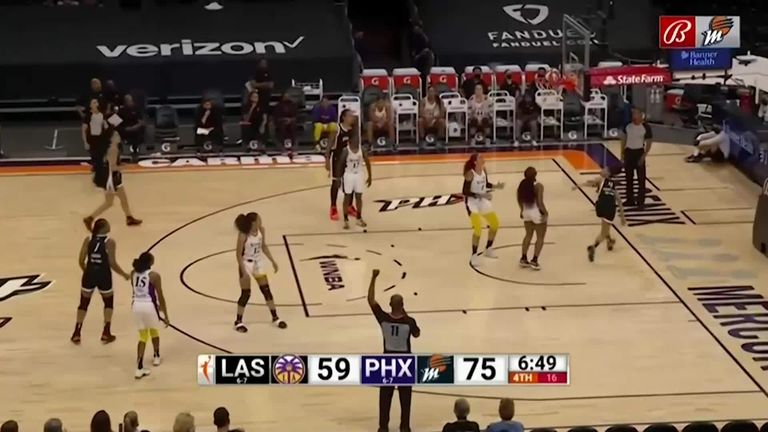 Highlights of the WNBA regular season game between the Los Angeles Sparks and the Phoenix Mercury.

Erica Wheeler scored 21 points, Te'a Cooper, who came off the bench to score a career-high 26 points in a win against Washington on Thursday, added 20, Brittney Sykes had 11 and Amanda Zahui B scored 10 for the short-handed Sparks (6-8), who used just eight players in the absence of injured Bria Holmes along with Nneka and Chiney Ogwumike.

Wheeler scored the first four points of the third quarter to tie the score at 47, but her team-mates added just two points during the first six minutes of the period.

Brianna Turner, who finished with a game-high 15 rebounds, Taurasi and Diggins-Smith each had a basket and an assist during a 13-2 run that gave the Mercury a 60-49 lead.

Whatever the 🐐 says, goes. @Suns in 5 pic.twitter.com/D0waUxcIDR

LA got within eight points, but Taurasi completed the third-quarter scoring with a pair of three-pointers that gave Phoenix a 69-55 lead.

Diggins-Smith's three-point play gave the Mercury a commanding 78-59 lead. The score was tied seven times and the lead changed hands three times before Cooper beat the buzzer with a jumper that gave LA a 26-24 lead at the end of the first quarter.

Taurasi surpassed the 9,000-point mark when she converted a three-point play that tied the score at 29 with 8:23 left in the second quarter. 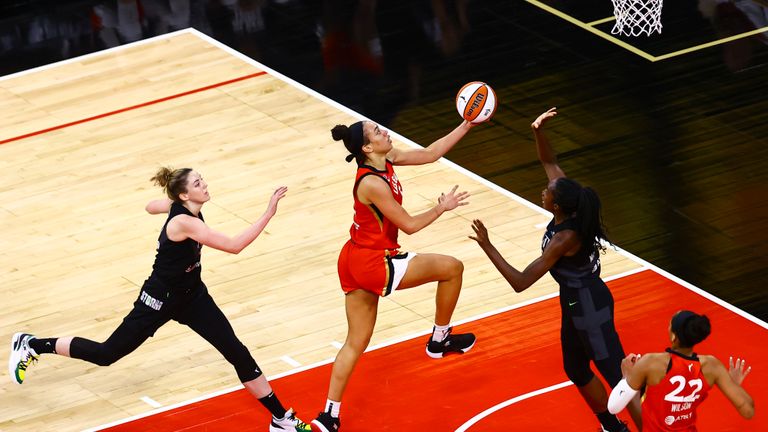 Highlights of the WNBA regular season game between the Seattle Storm and the Las Vegas Aces.

Chelsea Gray's pull-up jumper with 10.6 seconds left in overtime put the Las Vegas Aces ahead for good as they nipped the Seattle Storm 95-92 in a match-up of the WNBA's top two teams in Las Vegas.

Seattle (12-4) could have won the game, but Sue Bird's three-pointer came up begging and A'ja Wilson grabbed the rebound. She sank two foul shots with 0.7 seconds remaining.

Wilson led five players in double figures with 22 points and grabbed 11 rebounds for the Aces (11-4), while Gray added 21 points and seven assists.

The #POINTGAWDDDD put on a SHOW at The House!

Seattle forced overtime when Breanna Stewart, who scored a game-high 35 points, hit a layup with 52.7 seconds left to even the score at 84. The Storm could have won at the end of regulation, but Stewart missed a jumper and Bird turned the ball over on an inbounds pass in the last second.

The teams were surprisingly sloppy in an entertaining first half. Seattle coughed it up 13 times, one more than their average of 12 per game, and Las Vegas committed nine turnovers.

But the mistakes didn't seem to hurt the Storm, in part because they shot the ball at a 50 per cent clip in the first half, as opposed to the Aces' 41.7 per cent. They also dominated the boards to the tune of 22-13, making up for the turnovers.

🎥 Come from behind victory secured 💪

5 players scored in double figures as the Aces defeated the Storm 95-92 in overtime.#ALLIN ♦️♠️ pic.twitter.com/xrIIc0KyTu

Seattle established a seven-point lead late in the first quarter on a Jordin Canada bucket before Kelsey Plum pulled Las Vegas within 21-16 at the period's end on a jumper. The Aces drew within 39-37 late in the half, but Katie Lou Samuelson played "beat the buzzer" with a corner three-pointer, making it 42-37 Storm.

Stewart stroked a three-pointer midway through the third quarter to up Seattle's lead to 55-46. Las Vegas closed within two, but Mercedes Russell's putback with 19.4 seconds left gave the Storm a 65-58 advantage heading to the fourth stanza. 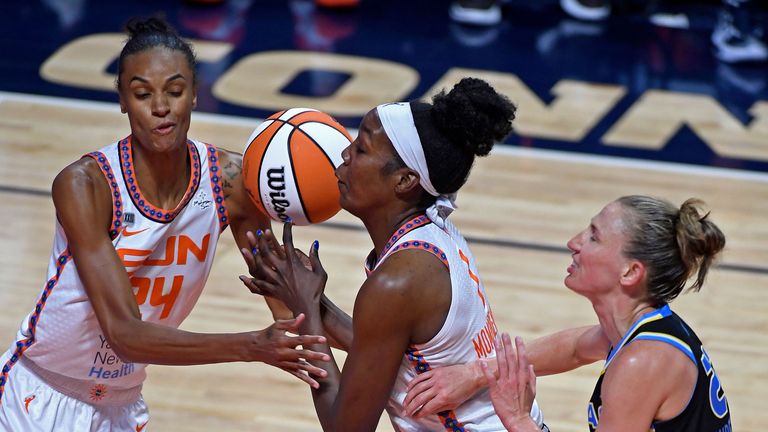 Highlights of the WNBA regular season game between the Chicago Sky and the Connecticut Sun.

Jasmine Thomas added 18 points in her 200th game with the Sun while Beatrice Mompremier grabbed a game-high 11 rebounds. Connecticut (10-5) have won two straight after a three-game losing streak.

Leading by six at half-time, the Sun used a 26-point third quarter to break the game open and led 62-44 entering the fourth. Candace Parker's driving layup pulled Chicago within 65-49 with 6:48 remaining, but the Sky were unable to mount a comeback.

Connecticut led 36-30 at the break. Bonner's three-pointer with 2:45 left in the first half made it 36-19 before Quigley's three to beat the first-half buzzer capped an 11-0 run to close the second quarter for Chicago.

Thomas' pull-up jumper to go up 4-2 with 7:06 left in the opening period put Connecticut ahead for good, the Sun leading 21-13 after one quarter.