No 4 pick Murray was a clear standout in Summer League play and deserved to be recognised as MVP following four games where averaged 23.3 points, 7.3 rebounds, two assists and 1.3 steals per game; watch all of the top compilations from NBA Summer League below Many of the 2022 draft class were still in kindergarten when the Sacramento Kings last made the playoffs but maybe that is finally about to change after their lottery pick in this year's draft won the NBA Summer League MVP.

Keegan Murray was selected fourth in last month's draft and was the top guard picked in the class.

All of the talk going into the draft was that there was a consensus top three and then a drop-off. Even with the mitigating circumstances that it was not against full NBA-calibre rosters, Murray has made a mockery of that talk with his displays over the past weeks

The only player who really looked consistently on the same level as Murray, with the pair being a cut above the rest, was Paulo Banchero. He was shut down after just two games, however, with the Orlando Magic seeking to wrap their new asset in cotton wool ahead of the season.

Together Banchero's Magic and Murray's Kings produced one of the most memorable summer league clashes of all time, a double-overtime thriller in which Orlando prevailed in sudden death. Murray compiled 20 points, nine rebounds and two assists in that game and was vital as the team surged back from an 18-point deficit with less than five minutes to go in regulation. 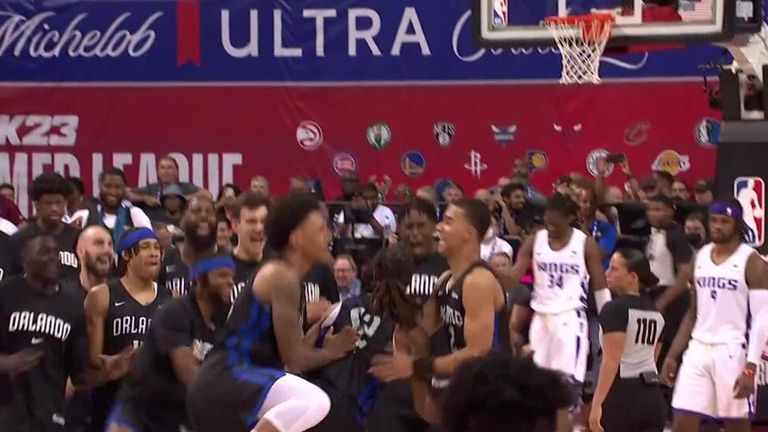 It was a true classic for the ages, but Murray's performances were strong in every game the Kings played. It now seems daft to suggest that there is a quality gap between him and Chet Holmgren or Jabari Smith Jr, the second and third picks in the draft, based on this evidence.

Of course, it's only summer league rosters and it's nothing you can read too much into in the long term, especially when it comes to the respective ceilings of the top four players, but it seems fair to say that: had it not been for the fact that, at 21 turning 22 next month, Murray is a fair bit older than the players taken before him, then he may well have gone slightly higher.

Murray had NBA Summer League MVP honours bestowed on him after averaging 23.3 points, 7.3 rebounds, two assists and 1.3 steals per game while shooting 50 per cent overall and 40 per cent on three-pointers in his four games in Las Vegas.

Much will be expected of the 6'8", 225-lb Murray once the 2022-23 season gets underway. He gives Kings first-year coach Mike Brown a versatile wing player to complement a core group anchored by point guard De'Aaron Fox and 6-foot-11 power forward Domantas Sabonis.

Murray's value vaulted after a stellar sophomore season at Iowa. He improved his scoring more than 16 points from his freshman year and made 66 three-pointers - 50 more than he had the previous season with the Hawkeyes.

Jeremy Sochan is flying the flag for GB in the 2022 NBA Draft – learn more about the teenager here.

The Kings have not made the playoffs in an NBA-record 16 consecutive seasons.

Adding Murray, the highest draft pick in Hawkeyes history, should go a long way toward helping Brown get off to a good start with his new team, one that looks decidedly different than the one that began the season a year ago.

Murray's ability to score inside and stretch the floor with his three-point shooting gives the Kings multiple options on how to use their rookie. Murray showed that flexibility last year at Iowa when he was fourth nationally in scoring average while making 40 per cent of his three-point attempts and grabbing 300 rebounds. Check out the top 10 dunks from NBA Summer League, including an electrifying dunk from Kevon Harris The live basketball continues with WNBA action on Sky Sports, subscribe to watch the live games.