After starring for Great Britain as a go-to scorer at Women's Eurobasket, Temi Fagbenle is back with the Minnesota Lynx and seamlessly adapting to a different role, writes Huw Hopkins.

When Temi Fagbenle was named one of the best five players at EuroBasket, many wondered why Great Britain's star center wasn't getting much playing time with her WNBA team, the Minnesota Lynx. Even British coach Chema Buceta used one of his animated post-game monologues to question it.

But Fagbenle only has two full seasons under her belt in the States, both of which have been with head coach Cheryl Reeve in Minnesota.

The 35th draft pick in 2016 has already defied the odds by being one of the few players selected outside the top 20 who secured a regular rotation spot, as Reeve explained: "She's got some serious upside. She was a third-round pick for us that has worked out to be pretty darn valuable, given that fact that not many third-rounders have a place in this league."

In her first season with the Lynx, Fagbenle contributed towards winning the franchise's fourth WNBA championship. Her minutes were few but she learned about the Lynx's winning culture and it projected into a much bigger role the following season.

Reeve has been impressed with her rise: "We're excited about Temi, I think she's someone that can help our team, and she's maturing, she's so coachable - anything you tell her she does."

This sentiment was echoed by Buceta when Fagbenle led the EuroBasket tournament in scoring while helping Britain to a best-ever fourth-place finish. He said: "She's a great player, but more importantly, she's a player for the team. She does a lot of the work, and she scores, but she's playing unbelievable defense."

It is a willingness to do the dirty work that earned Fagbenle a spot in the WNBA, but it's creative confidence on offense that has made her into the next big thing.

Who's leading the playoff race in the WNBA?

And yet, despite the occasional staredown and request for a foul if she is being clobbered by a helpless defender, Fagbenle says very little on the court. Her expression doesn't change. Her focus never shifts.

This ability to stay grounded helped her become one of the best five players in Europe this summer. Even after picking up the All-Star Five nod in Serbia, she said: "It's another great achievement that I am blessed to have."

That's it. No whooping and hollering, Fagbenle remains grateful and poised to take the next step.

But she isn't a boring, personality-less player. She will occasionally pop up on social media, performing a dance routine with her brother, or fooling around in some other way. She's also got a wicked sense of humour and can use it in thoughtful and engaging ways.

While being interviewed after a win against Hungary that guaranteed Britain spot in the EuroBasket semifinals, Fagbenle said: "It's really dope, it's really such an accomplishment."

But then, with a glint in her eye, she leaned forward into the dictaphone and spoke, clearly and loudly, directly to Britain's funding and governing bodies that had recently pulled almost all of basketball's backing: "I hope this can give us some funding. Are you going to get us some funding now? I think we can medal, what do you think? Are we medal contenders now? Are we allowed money now?"

During two successful seasons in EuroLeague playing for CCC Polkowice, Fagbenle learned to be a leader, for Britain she carries the scoring load, and while her role is growing in Minnesota, she has come off the bench and is an important role player since returning from EuroBasket. 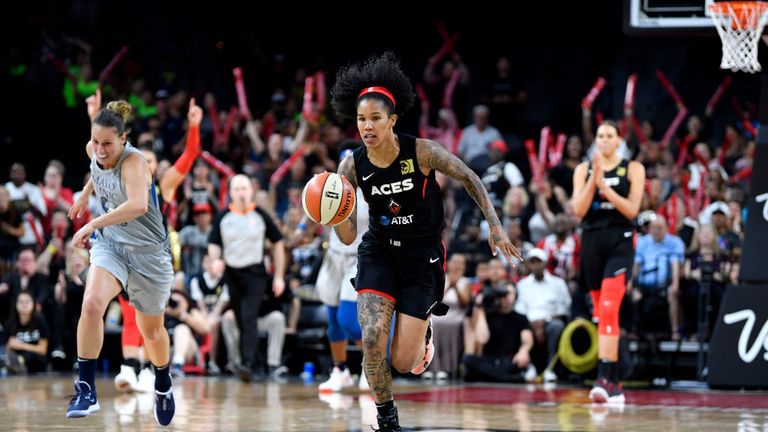 She said about the varying responsibilities: "It's hard and I relish the challenge. Through the ups and downs, I take it all in my stride and understand that it is all part of my growth as a person and athlete. It's a blessing to be able to play the roles of benchwarmer and go-to player because I have realised that every role has its importance on a team. To be able to check one's ego at the door and have a team-first mentality in whichever role one plays, is a strong testament to one's character."

It wasn't necessarily meant to be this way on the Lynx this season. The team lost players to retirement, one to injury, and another who wanted to take a sabbatical, and while Reeve managed to rebuild the roster successfully during the off-season, the lone star remaining from the core four that won multiple titles together, Sylvia Fowles, plays a similar position to Fagbenle. On top of that, Fowles has possibly been the best true center in the WNBA for the past five years. 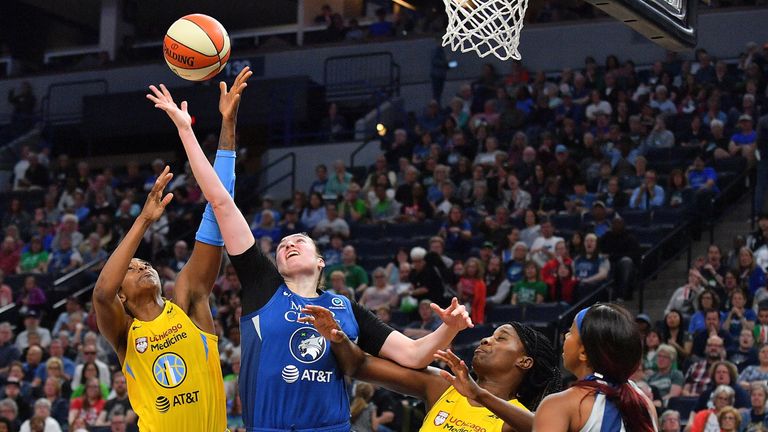 Becoming the starting go-to big on this team is not going to be simple.

But Fagbenle can also play well at the power forward position, which gives the Lynx greater flexibility. Reeve said: "I thought she had such momentum coming out of the 2018 season that I was hoping we were going to be able to put her right in - I had a starting job open, it just didn't work that way.

"But Temi was kind enough to be with us for a couple of weeks at training camp [before going to EuroBasket] since we were so new and had so many new faces. We thought it was important that she at least see what we're about, so when she came back it's not brand new for her, we're not starting from zero."

Since returning, Fagbenle has been coming off the bench and hasn't quite got into her stride within the system, but the coach clearly has confidence in the Brit and is playing her a career-high 16.8 minutes per game.

Fagbenle said "It is a completely different team than I am used to - one that poses a different set of challenges. I am happy to take on these challenges with my team-mates - new and old.

"It feels great to see familiar faces and get acquainted with new ones. We have a lot of talent on the team and it will be interesting to see if we can become a cohesive unit." The Lynx have struggled in the four games since Fagbenle came back, managing just one win, but the All-Star break and a rare stretch in the schedule without a game, has given the team a chance to regroup and finish strong to chase for a playoff spot.

The team is at 10-10 and are still in a good position, and whether Reeve needs her to come off the bench, be a leader or dominate in the scoring column, Fagbenle will keep herself grounded and be a player for the team.

Or, as she said, with no fuss or drama: "I just have to stay aggressive, keep my confidence high, and play relaxed and poised."