After trading Anthony Davis, the New Orleans Pelicans are regrouping with a potential game-changing overhaul headlined by No 1 Draft pick Zion Williamson.

There were teams with worst records, and teams with more drama. But no team had a combination of both quite like the Pelicans last season. It all swirled around Anthony Davis, the best player in franchise history, who pulled a power move by switching agents to Rich Paul, business partner of LeBron James.

Everyone saw what was coming next, except Dell Demps, the beleaguered GM who refused to be proactive and instead tried to fight a losing battle.

Through Paul, Davis made a private trade request in the fall and then went public a week prior to the trade deadline when Demps hesitated. When the deadline passed, Davis was still in New Orleans and that was a problem.

The rest of the season was a disaster, as Davis was in an awkward state of limbo and the Pelicans, anxious to preserve their only true asset, managed his minutes. The fallout was severe: a fan backlash towards Davis, a fractured locker room, a state of emergency within a franchise that wasn't among the league's healthiest to begin with, and Demps getting the boot.

Everything else about the Pelicans was overshadowed, such as Julius Randle's solid production in his first (and subsequently only) season in New Orleans, and Jrue Holiday's continued splendid play on both ends. In the end, Davis had long checked out, the Pelicans fell back into the lottery a year after reaching the second round of the playoffs, and a housecleaning was ordered by ownership.

History might reflect that the Davis fiasco, in hindsight, was the most important moment in franchise history, and in a positive way. That's because a much-needed series of changes was forced to happen because of it, and just maybe the Pelicans will be better off for it. 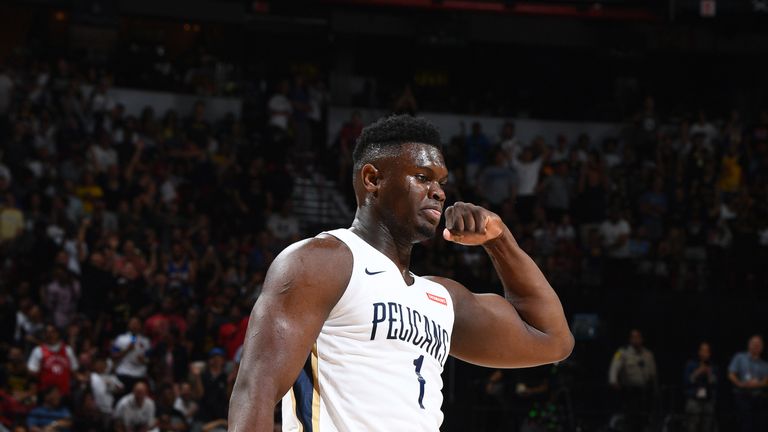 The new-look New Orleans Pelicans are set to follow the example of the 2018-19 Los Angeles Clippers in the 2019-20 season, says NBA TV analyst Wes Wilcox

It created a change in command, with David Griffin replacing Demps and tackling the Davis situation head-on rather than tiptoeing around it. And because Davis was essentially benched the entire second half of the season, that allowed the Pelicans to fall into the lottery, where they got lucky and landed the first overall pick in one of those drafts that contained a potential game-changer.

New Orleans flipped almost overnight, getting an impressive haul for Davis in the long-awaited trade with the Lakers, and adding Zion Williamson, an explosive talent with gate appeal. It was a best-case scenario for the Pelicans, who went from laughing stock to landing a game on Christmas Day this season.

Griffin played his hand skillfully, unlike Demps. Griffin didn't create distrust or burn bridges and instead maintained good communication with Davis and all potential trading partners. He created a robust market for Davis and then negotiated with the one team that needed Davis the most: the Lakers with an aging LeBron James.

Not only did Griffin get promising young players in Lonzo Ball, Brandon Ingram and Josh Hart, he also acquired the Lakers' future with a collection of first-round picks and first-round swaps. Essentially, if the Lakers collapse in the post-LeBron era, the Pelicans will be awash in assets similar to the Boston Celtics when those Brooklyn Nets' first-rounders turned to gold. Williamson should never have to worry about talent around him in New Orleans as Davis did. And unlike Davis, Williamson won't be in a hurry to leave in a huff.

There's no reason for the Pelicans to tank, knowing that ample picks are coming their way. With that in mind, Griffin seized the moment to ramp up the rotation, adding some much-needed shooting in JJ Redick and a reliable veteran in Derrick Favors. It's very possible that the Pelicans can compete for a playoff spot in 2019-20, and again, this seemed remote when last season ended.

There's plenty of hope for Ball. He'll have the relief of playing away from LA for the first time in his life and the advantage of suiting up next to Holiday, who can play off the ball if necessary. Ingram will be returning from a health scare related to blood clots that cut short his season but the prognosis is good.

In addition to Williamson, the draft also produced Nickeil Alexander-Walker, who brings good size (6ft 5in) to the backcourt, and Hayes, a raw big man who'll instantly enroll in the Pelicans' development school.

To make the upcoming season as stress-free as possible, Griffin handed coach Alvin Gentry a one-year extension. The pair once worked together in Phoenix, when Gentry led the Suns to the Western Conference Finals. For the first time in his tenure with the Pelicans, Gentry has ample talent and a solid plan. Now it's up to him to put the right pieces in place.

Clearly, though, the big prize is Williamson, who comes with robust talent and also a personality that reflects well on him and the franchise. Williamson can be a saviour and, once Drew Brees retires, the face of New Orleans sports.

It all depends if he makes good on the immense expectations. Given his knack for making crowd-pleasing plays on both ends, the burly forward has star potential - which is exactly what a small market needs.

There's a reason why the Draft lottery results caused Gentry to curse with joy and team employees to dance on tables. Perhaps never before has a franchise fallen hard, then rose suddenly, quite like the Pelicans did in a matter of weeks. They're still partying in New Orleans.

Veteran NBA writer Shaun Powell has worked for newspapers and other publications for more than 25 years. Follow him on Twitter at https://twitter.com/Powell2daPeople

The views on this page do not necessarily reflect the views of the NBA, its clubs or Turner Broadcasting.