Following the NBA's decision to suspend the 2019-20 season, this live stream will no longer take place.

The Phoenix Suns visit the Dallas Mavericks on Saturday at 6pm and you can watch live for free on skysports.com, Sky Sports app and Sky Sports' YouTube channel.

Luka Doncic and the Mavs continue their pursuit of a high seed for the Western Conference playoffs as they welcome the Suns to American Airlines Center.

The Mavericks (39-27) sit seventh in the West but are just three games back from fourth-placed Utah Jazz. Finishing fourth in the West would earn Dallas homecourt advantage in the playoffs. A fifth- or sixth-place finish would allow them to avoid conference heavyweights the Lakers and, possibly, the Clippers in the opening round of the postseason.

Doncic remains key to those aspirations. The 21-year-old Slovenian superstar is averaging 28.7 points, 9.4 rebounds and 8.7 assists and remains on the periphery of the MVP race

In recent weeks, Kristaps Porzingis has shown more regular glimpses of the play that saw him become an All-Star during his tenure with the New York Knicks. The 7ft 3in Latvian forward earned a Western Conference Player of the Week award after putting up 26.3 points, 11.8 rebounds and 2.25 blocks per game across four games between February 24 and March.

However, Porzingis endured a nightmare 3-of-17 shooting night on Sunday in a loss to the Indiana Pacers and struggled to find his offense again in Tuesday night's loss to the San Antonio Spurs, scoring just nine points on 4-of-15 shooting. He will hope the visit of the Suns will provide him with the perfect opportunity to bounce back. 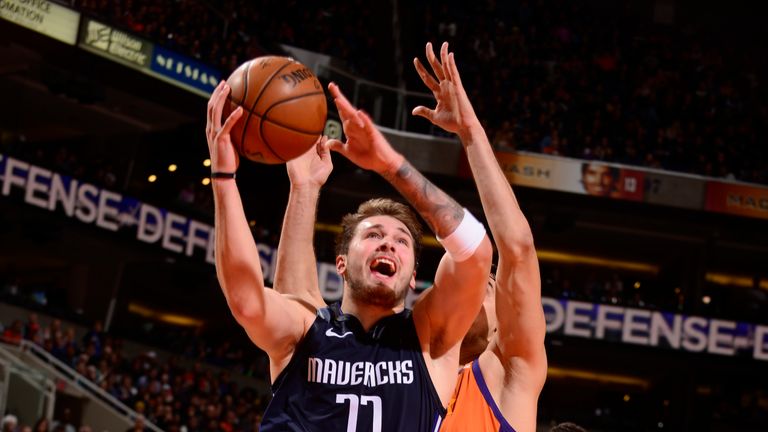 Luka Doncic and the Dallas Mavericks host the Phoenix Suns in an NBA Primetime clash on Saturday at 6pm - watch the game via a free live stream on skysports.com., the Sky Sports app and YouTube

After a bright start to the season, the Suns (26-39) has slowly slid out of the Western Conference playoff picture. Injuries have played a major part in that story. Forward Kelly Oubre is out until next season after having surgery on his right knee while earlier in the season center DeAndre Ayton was suspended - he has started just 25 of their 64 games.

Star guard Devin Booker has carried the offensive load for Phoenix, averaging 26.1 points and 6.6 assists per game and earning All-Star selection for the first time in his career. Offense has been the least of the Suns' problems this season. They lead the NBA in assists per game (27.2).

While the race for the eighth seed is wide open heading into the final stretch of the season, the Suns have too much ground to make up to harbour realistic hope of stealing that final postseason berth. However, they remain on target to reach 30 wins, a dramatic improvement on last year's 19-63 record.

Watch the Suns take on the Mavericks via a free live stream on skysports.com, the Sky Sports mobile app and Sky Sports' YouTube channel on Saturday night from 6pm