Giannis Antetokounmpo and Khris Middleton scored 33 points each as the Milwaukee Bucks rallied to defeat the Miami Heat 130-116 on Thursday. Giannis Antetokounmpo and Khris Middleton scored 33 points each as the Milwaukee Bucks - who trailed by 23 in the first half - rallied to defeat the Miami Heat 130-116 on Thursday.

Antetokounmpo, who picked up his fifth foul with 10:48 left in the fourth, added a game-high 12 rebounds and four assists in 30 minutes. Middleton had a team-high eight assists and six rebounds in 34 minutes.

Milwaukee (55-14) overcame a 17-point half-time deficit to snap a two-game losing streak and clinch the top seed in the Eastern Conference.

For the second straight game, Miami were without Jimmy Butler (sore right foot). Butler, who leads the Heat in scoring, assists and steals, is hoping to return in time for the playoffs.

Heat center Bam Adebayo, slowed by foul trouble, was held to six points, five rebounds and six assists in 21 minutes. But he hit a three-pointer at the half-time buzzer. It was just the fifth three-pointer of his three-year NBA career.

Which restart games are live on Sky Sports?

The Bucks opened the third quarter on a 26-8 run and took their first lead of the second half at 82-81 on a Lopez dunk with 5:11 left in the period. Miami fought back and led 98-92 entering the fourth, but the Bucks were too strong down the stretch, compiling a 20-0 run to take full control. Damian Lillard recorded 45 points and 12 assists and matched his career high of 11 three-pointers to lead the Portland Trail Blazers to a 125-115 victory over the Denver Nuggets.

Gary Trent Jr added 27 points and matched his career best of seven three-pointers as Portland (32-38) moved within a half-game of the eighth-place Memphis Grizzlies in the Western Conference playoff race. Jusuf Nurkic scored 22 points and CJ McCollum added 13 for the Trail Blazers.

The Nuggets moved ahead 93-92 on Porter's three-point play 63 seconds into the fourth quarter. Trent's triple 17 seconds later put the Trail Blazers back ahead. Later, Porter connected on a three-pointer, and Dozier added a hoop to give Denver a 106-105 edge with 5:38 left.

But Lillard canned his 11th three-pointer with 4:47 left to give Portland a 110-106 advantage. After Dozier scored to bring the Nuggets within two, the Trail Blazers ripped off eight straight points. Trent's seventh triple made it 121-112 with 1:26 remaining as Portland closed out victory. 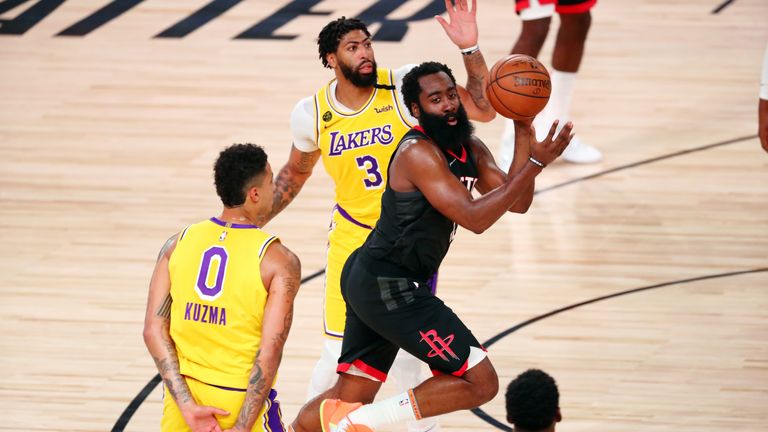 James Harden paired 39 points with 12 assists as the Houston Rockets defeated the Los Angeles Lakers 113-97 at The Arena.

The Lakers (51-17) played without LeBron James (sore right groin) and continued their offensive struggles. Anthony Davis posted 17 points and 12 rebounds but also committed seven turnovers while Kyle Kuzma led the Lakers, who shot 2-of-19 on three-pointers, with 21 points.

The Lakers injected a bit of interest in the fourth quarter with a 16-3 run that started in the third. Houston scored their first basket of the final period of the 7:09 mark via a Harden lay-up, extending the lead back to seven points.

Robert Covington, Harden and Austin Rivers added threes in succession to help the Rockets push their lead to 105-89 and reclaim control once and for all. 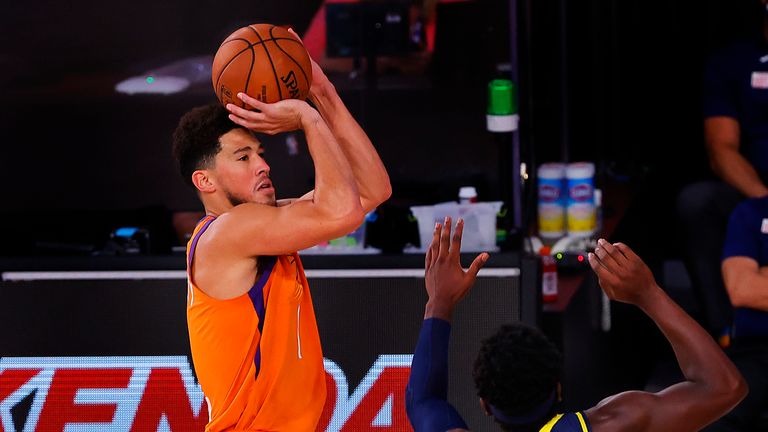 A run of 21 unanswered points spanning the third and fourth quarters powered the Phoenix Suns to a 114-99 win over the Indiana Pacers.

The Suns (30-39) moved to a perfect 4-0 in seeding games and did so trailing for less than three total minutes against a Pacers team that came into Thursday's match-up undefeated in their three seeding games.

Indiana (42-27) led on the game's first basket, then again a few minutes later before Phoenix took over. The Pacers surged to grab a 72-70 lead with a little more than three minutes remaining in the third quarter and pushed it to 75-72 before Suns coach Monty Williams turned to his bench.

Cameron Payne led the Phoenix reserves in igniting the decisive run, scoring 12 of his 15 points over that stretch. Dario Saric added another 16 points as the Suns' 34-16 scoring advantage from the back-ups made the difference.

TJ Warren, who led the NBA in scoring through the first three seeding games, was held to 16 points on 7-of-20 shooting from the floor. Malcolm Brogdon led all scorers with 25 points and helped buoy a fourth-quarter rally.

Victor Oladipo made back-to-back three-pointers, Brogdon added another and the Pacers' 13-1 burst pulled them within six points.

Deandre Ayton led the Phoenix response. He followed a blocked shot of Brogdon on one end with a dunk on the other. He then grabbed an offensive rebound leading to a Devin Booker three-pointer, then slammed home another dunk off a Ricky Rubio alley-oop that pushed the Suns ahead by 15 points with three minutes remaining.

Ayton scored a team-high 23 points, grabbed 10 rebounds and blocked four shots. Cameron Johnson and Booker also recorded double-doubles for the Suns at 14 points and 12 rebounds, and 20 points with 10 assists, respectively. 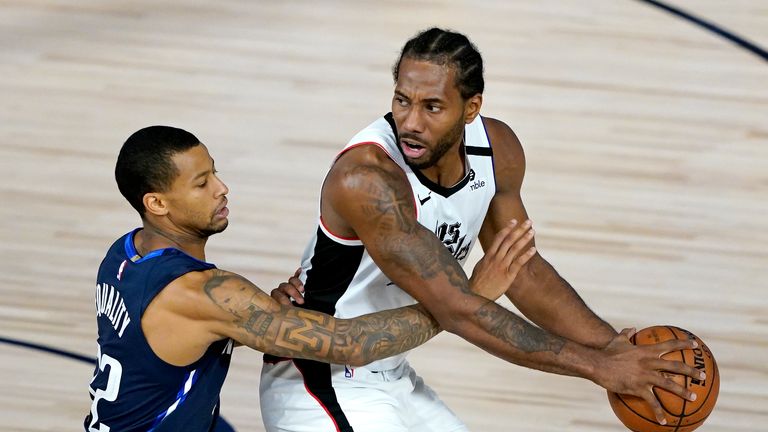 Kawhi Leonard and Paul George combined for two hoops in a nine-point tie-breaking flurry midway through the fourth quarter, propelling the LA Clippers to a 126-111 victory over the Dallas Mavericks.

Leonard finished with a team-high 29 points and George had 24 for the Clippers (46-22), who clung to the No 2 seed in the Western Conference with just their second win in four seeding games.

Kristaps Porzingis had 30 points and nine rebounds while Luka Doncic had 29 points for the Mavericks (41-30), who locked themselves into the No 7 playoff position in the West with a third loss in four games.

The Clippers led for the entire second half until Maxi Kleber nailed a three-pointer with 6:41 remaining in the fourth quarter to create a 101-all tie. LA then responded with the next four hoops, with Ivica Zubac getting the run going with a go-ahead putback.

Leonard then hit a three-pointer, followed by two-point shots from Marcus Morris Sr and George, giving the Clippers a nine-point cushion with just four minutes remaining. The Mavericks got no closer than seven the rest of the way. 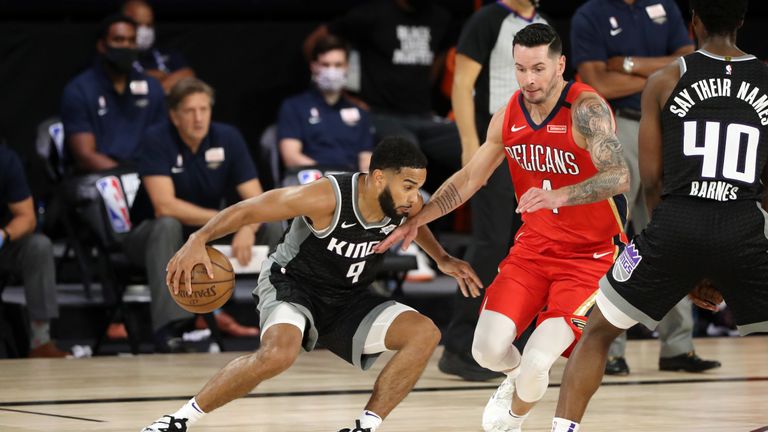 Bogdan Bogdanovic scored a career-best 35 points as the Sacramento Kings got their first victory of the NBA restart, defeating the New Orleans Pelicans 140-125.

De'Aaron Fox added 30 points and 10 assists, Harrison Barnes scored 22, Nemanja Bjelica had 11 and Cory Joseph 10 as the Kings (29-39) ended a three-game losing streak in the restart.

Zion Williamson scored 24 points on 10-of-12 shooting in 22 minutes while Brandon Ingram had 24 for the Pelicans (29-39), who dropped into a tie for 11th place with the Kings. JJ Redick scored 18 points, Jrue Holiday had 17 and Josh Hart 11 for New Orleans.

The Kings made 11 of their first 12 shots to take an early 28-17 lead. They led by as many as 14 points before finishing with a 49-39 lead at the end of the first quarter. Fox's three-point play and Bogdanovic's three-pointer helped the Kings take a 77-70 lead at half-time.

Joseph made two three-pointers during a 20-8 run that gave Sacramento a 117-103 lead at the end of the third quarter. The margin reached 19 points midway through the fourth quarter as the Kings cruised to victory.