WNBA: Which star players are challenging for the MVP award?

Who are the favourites challenging for the 2020 WNBA MVP award? Huw Hopkins looks at four leading contenders.

When Ron Burgundy went into battle against Channel 9 Evening News' Wes Mantooth, Channel 2 News host Frank Vitchard and Arturo Mendes from Spanish Language News, no Anchorman went alone. Their colleagues were right there alongside them. The respective news teams were willing to die for their leader.

Who is leading the way in the early season going?

No WNBA players should expect to be hit with a trident anytime soon, but there are four MVP candidates who have been leading their teams into battle in this melee of a season, inspiring their supporting cast to leave it all on the line.

They are all helping their team-mates put together the best records in the league in different ways, but who stands a chance at taking home the individual silverware?

When Breanna Stewart last played a full WNBA season, she won MVP honours on her way to winning the championship with the Seattle Storm. In 2018, it became her team. She was the go-to scorer - instead of it being a combined responsibility with Jewell Loyd - and she took over as the player with the highest usage (the percentage of plays the team uses a player when they are on the floor) on the roster. 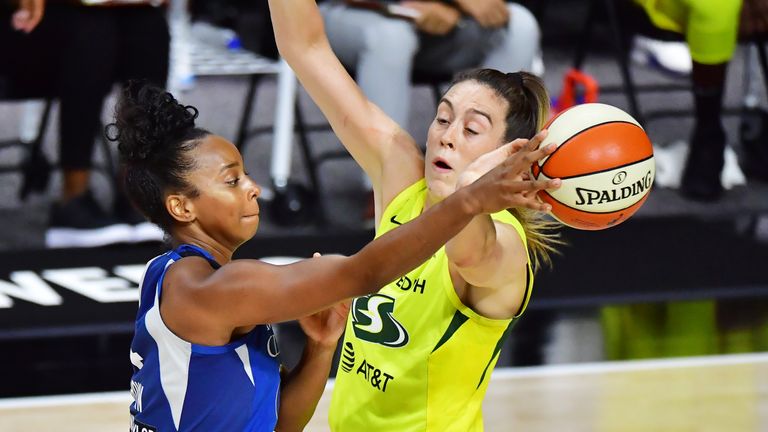 This season, that usage number has increased. In 2018, she was used 27.3 per cent of the time, while Loyd was used 24.4 per cent. The gap of 2.9 per cent has increased to 5.2 this season with Stewart being used 29 per cent of possessions, and consequently the team began the year with the best winning percentage in league history.

While her efficiency is down on 2018 as a result of the additional workload, it has resulted in Stewart scoring 19.5 points - third in the league - and blocking 1.3 shots a game. Ultimately, it has helped the Storm comfortably sit atop the WNBA standings.

How Seattle close out the final few games, and if they maintain their No 1 playoff seed, will influence her chances of picking up her second MVP trophy.

It is rare for teams in the WNBA to build around a point guard. Teams traditionally look to big forwards or versatile centers to lead them.

Elena Delle Donne, Candace Parker and Lisa Leslie are great pivot talents, who can play the post while also being able to handle the ball.

Maya Moore, Diana Taurasi and Sheryl Swoopes were big wing scoring dynamos with good playmaking skills, but Cynthia Cooper is probably the only true point guard to have won the MVP trophy. At 5ft 10in, Cooper was still big and strong for the position, not to mention one of the most experienced professionals during the league's first seasons.

Vandersloot is 5ft 8in. She is a passing wizard and Chicago Sky head coach James Wade has developed a system that enhances her incredible vision.

Sky forward Cheyenne Parker spoke highly about her point guard to Sky Sports NBA and said: "She's our general. She sets the tone from the beginning, just with her energy, her IQ and the leadership she has on the floor.

"Courtney is obviously the best point guard in the league, in the world. Having her as our general is huge and we just have to be ready when she passes us the ball." Vandersloot has always averaged a decent number of assists per season, but she recorded career bests in each of the two seasons Wade has been in charge. This year she is managing career bests 13.2 points per game and 9.8 assists - the latter being the best per game average ever, and more than four assists better than her nearest rival.

With her at the helm last year, the Sky had the third best season in franchise history, and their win percentage is even better in 2020. After a tough couple of weeks, they can close out the season well and be in with a chance of winning the franchise's first championship.

Entering her third season, A'ja Wilson absolutely had the talent to be one of the most devastating players in the WNBA, but she might not have even been one of the best bigs on the Las Vegas Aces.

Liz Cambage sitting out meant the scoring load was going to be heavier for Wilson, but when Kelsey Plum went down with an injury, it meant the all-round demands were going to be quite different. The Aces brought in veteran All-Star Angel McCoughtry to help with playmaking, but in a half-court system that relies on two paint-favouring bigs and few shooters, the pressure is on.

Wilson is the league's second-best scorer with 20.3 points per game. She is fourth in blocks with 1.78 and it is no coincidence that the Aces are scoring more than any other team in the league while allowing the fourth fewest points per game.

Wilson is the reason why Las Vegas are currently holding down the second best record in the league, and why they are chasing the Seattle Storm for the top seed without Plum or Cambage anywhere near Bradenton.

The LA Sparks talisman has been in the WNBA since 2008, and in that first year, Candace Parker became the first and only player to win Rookie of The Year and MVP in the same season.

Twelve years later and the veteran is still performing at the same level. 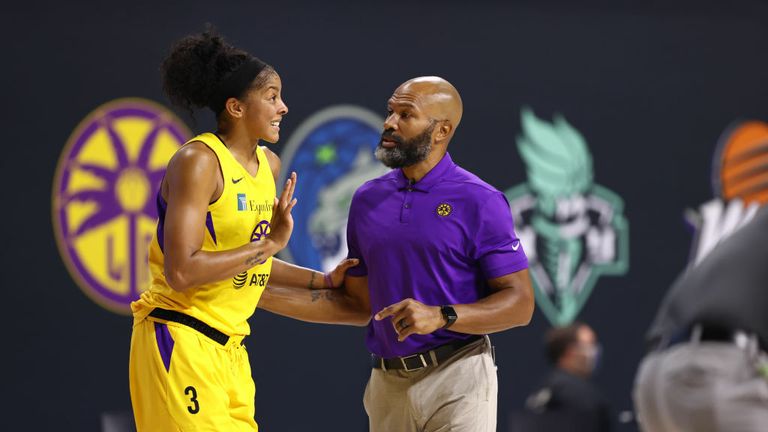 Sparks head coach Derek Fisher spoke to Sky Sports NBA about Parker's ability to perform like she is still 22.

"She has taken this on herself, we didn't have to encourage her to come with a certain mentality. She realises that she's closer to finishing her career than when she is starting," he said.

"When you approach things from that perspective and you know that at some point your time will be out, you just want to finish it the right way."

Parker might not be scoring like she did in that first season, but her playmaking is helping others even more - to the tune of 4.4 assists per game, which is second best on the team - to add to averages of 9.6 rebounds and 14.8 points. 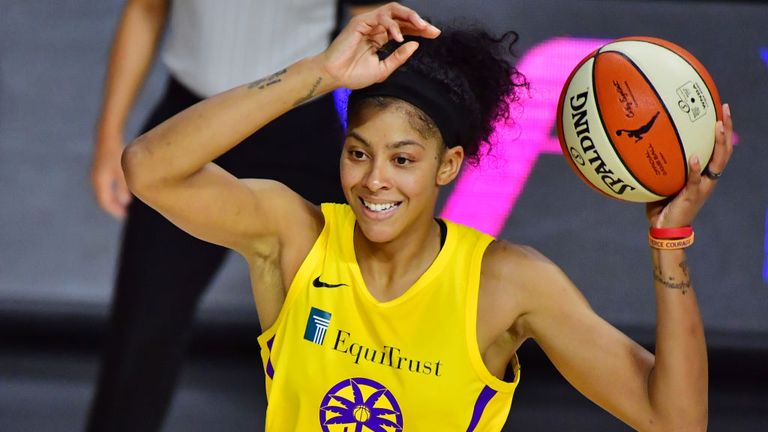 Her rebounding has been so important that, even with her individual league leading numbers, the team is still among the worst in the WNBA at clearing up missed shots. Basically, if Parker was not there, the Sparks might not finish a defensive possession all season.

Her versatility is helping the team get any shot they want, and the Sparks' offense is making them one of the biggest threats in the WNBA.