Anthony Davis is nearing his return to action for the Los Angeles Lakers having been sidelined since February 14; watch the league-leading Utah Jazz on Sky Sports on Friday night when they host the Indiana Pacers - join us from 8pm on Sky Sports Arena

Davis was missing for the Lakers' defeat to the Boston Celtics and Vogel admitted it is "unlikely" he will play in the double-header against the Utah Jazz on Saturday and Monday, however the news marks a major stride towards a welcome boost for the reigning NBA champions.

The 28-year-old has been sidelined since February 14 when he suffered a calf strain and tendinosis in his right leg against the Denver Nuggets, with the Lakers 13-15 in the 28 games he has been absent for. 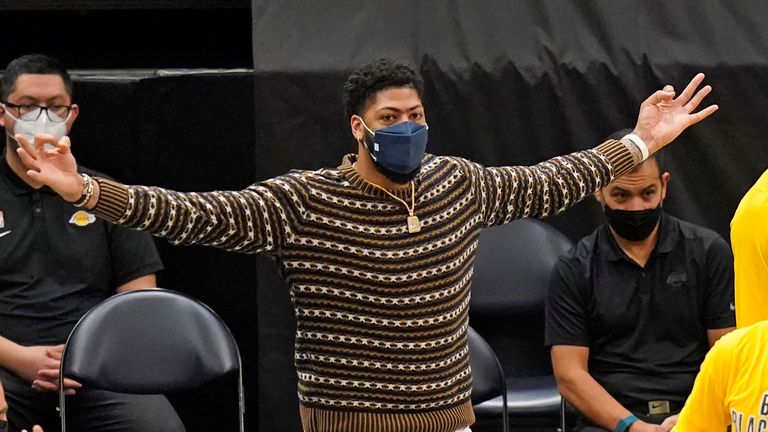 Vogel explained the Lakers will approach Davis' return with caution as they seek to avoid another disruption, particularly when considering his unkind history of injury issues.

"Whenever it is that he returns, it's not going to be a full return to playing 30-something minutes a night," Vogel told reports. "Especially with the nature of practice and how shorthanded we are, he's going to have to use some games to try to get himself back in shape. So the first two games he's back will likely be short-minute performances."

Davis was averaging 22.3 points, 8.3 rebounds and three assists in 32.8 minutes per game this season prior to his injury and promises to be integral in helping the Lakers restore some consistency amid their toughest spell of the campaign so far.

The Lakers also remain without talisman LeBron James as he continues to nurse a high ankle sprain that has kept him out of action for over three weeks.