Coverage of the NBA playoffs continues on Friday night as the Milwaukee Bucks host the Hawks, seeking to tie the Eastern Conference Finals series after Trae Young's 48-points led Atlanta to victory in Game 1; join us live from 1:30am on Sky Sports Main Event & Arena 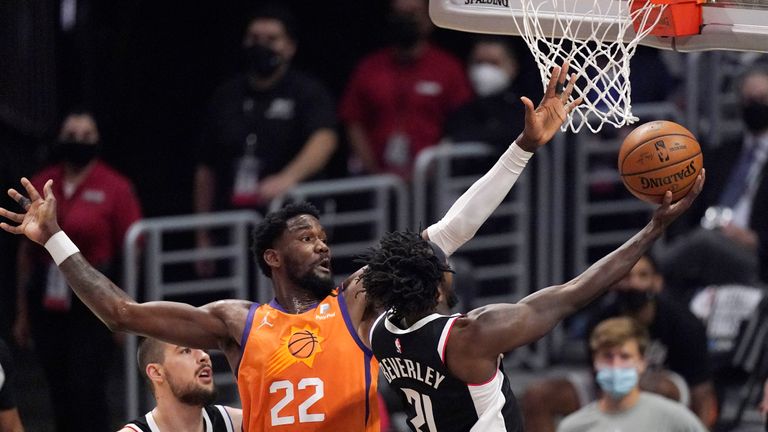 After watching his team get run over by a club he believed wanted it more in Game 3 of the Western Conference finals on Thursday night, Phoenix Suns coach Monty Williams had a message for his guys.

Teams down 2-1 in a best-of-seven series tend to be desperate, too. Paul George scored a game-high 27 points, Patrick Beverley harassed Devin Booker into a second consecutive subpar performance, and the fourth-seeded Los Angeles Clippers avoided a 3-0 hole in the series by working their Game 3 magic once again in a 106-92 victory over the visiting Suns.

"Typical playoff desperation by them," Williams said of the Clippers, who played themselves into a 2-0 deficit for the third consecutive series with consecutive losses in Phoenix. "We didn't play with the desperation needed to win a game like that."

Reggie Jackson chipped in with 23 points for Los Angeles, while Ivica Zubac outplayed Deandre Ayton with 15 points and 16 rebounds, giving the Clippers a more balanced offensive attack than they'd had in the first two games.

But the Los Angeles turnaround came as much on the other end of the court, with the Beverley-led defense limiting the second-seeded Suns to 38.9 percent shooting overall and just 10-for-32 (31.3 percent) on 3-pointers.

Two games after he burned the Clippers for 40 points in the series opener, Booker shot just 5-for-21 en route to 15 points. Backcourt mate Chris Paul, making his series debut after being released from COVID protocol, struggled to 15 of his own on 5-for-19 shooting. They combined to sink just 3 of 14 on three-point attempts.

"Pat Bev energized us," Jackson praised. "He fired up everybody. Let's go; let's go.' Then I just brought the gas. We all figured out how to do better." Paul, who managed a game-high 12 assists in 39 minutes, hadn't played since Game 4 of the Western semi-finals against the Denver Nuggets on June 13.

The NBA Most Valuable Player candidate had an excuse, Williams noted. Booker didn't.

"For Chris, probably more conditioning," Williams cited. "For Book, these kinds of shooting nights don't happen often. They put a lot of attention on him, a lot of hands on him. They'll adjust."

The Clippers, who already have become the first team in NBA history to erase a pair of 2-0 deficits in the same postseason, trailed this time 48-46 at halftime before dominating the second half.

Down 53-50 in the second minute of the third period, the Clippers got three consecutive hoops from Terance Mann to grab a lead they never relinquished en route to finishing the quarter on a 30-16 run.

George's buzzer-beating, half-court shot capped the surge that produced an 80-69 lead, and the Suns got no closer than six. "This team is tough. We do whatever it takes," assured George, who complemented his 27 points with 15 rebounds and a team-high eight assists.

"It's win-or-go-home in my opinion right now, and I'm just going to leave it on the floor."

Williams believes that's exactly what his team will do in Game 4.

"Our guys don't have the excuse of being young anymore," he said. "We've been in playoff games. We know what it takes. Now we've got to go out and do it.

"They threw a punch. Now we have to counter and throw another punch." Chris Paul of the Phoenix Suns became the 13th player in NBA history to reach 1,000 NBA Playoffs assists during Game 3 of the Western Conference Finals against the LA Clippers.

Mann was a fourth Clipper in double figures with 12 points for a team still missing leading scorer Kawhi Leonard, who watched the game from the stands.

Ayton had 18 points and a team-high nine rebounds for Phoenix, which lost key reserve Cameron Payne to an ankle injury in the second period. Mikal Bridges added 13 points and Cameron Johnson 12 in the defeat.

Game 4 is scheduled for Saturday night, again at Staples Center in Los Angeles.