Chris Paul: Phoenix Suns have got to close out quarters better, LA Clippers were aggressors in Game 5

Coverage of the NBA playoffs continues on Tuesday night as the Milwaukee Bucks visit the Atlanta Hawks 2-1 up in the Eastern Conference Finals. Join us live from 1:30am on Sky Sports Main Event & Arena

Phoenix Suns veteran point guard Chris Paul says his team have to be better after their 116-102 defeat to the Los Angeles Clippers on Monday.

The 36-year-old, who is aiming to make his first NBA Finals after 16 years in the league, was disappointed with how his team started against the Clippers.

"We've got to close quarters better. That's been a problem for us all series long. Those last two-and-a-half, three minutes of quarters. We took the lead, cut it to 1 or 2, then they go and get a bucket and then they go on a run.

"Our offense feeds off our defense so we've just got to remember that."

Paul George was the star man for the Clippers in Game 5, pouring in 41 points and 20 in the third quarter alone. He finished 15 of 20 from the field, including 3 of 6 from 3-point range and added 13 rebounds and six assists.

"He got it going," Paul said. "He was getting his spots, making shots. Twin (Marcus Morris Sr.) and Reggie (Jackson) got it going early, gave them a chance to settle into the game, we've got to make it tough for them.

"We gave them a lot of open shots early. They got their threes going and I think, as a team, they play off confidence when they're making shots so we've got to get the right people shooting."

Another aspect that hurt the Suns in the game was a poor start in the first quarter and also a costly 23 points given away off turnovers.

"It is just unacceptable the way we started the game," Suns coach Monty Williams said. "It was a big hole for us. It is pretty obvious that we can't play with the show-up mentality. We showed up in the first quarter and they played with desperation."

Paul said: "It's frustrating (to get off to a poor start) but you realise it's a long game. You settle in and guys came in and we fought back. It seemed like everytime we get there they'd do another run or whatnot so we'll look at it and we've got to come out better. 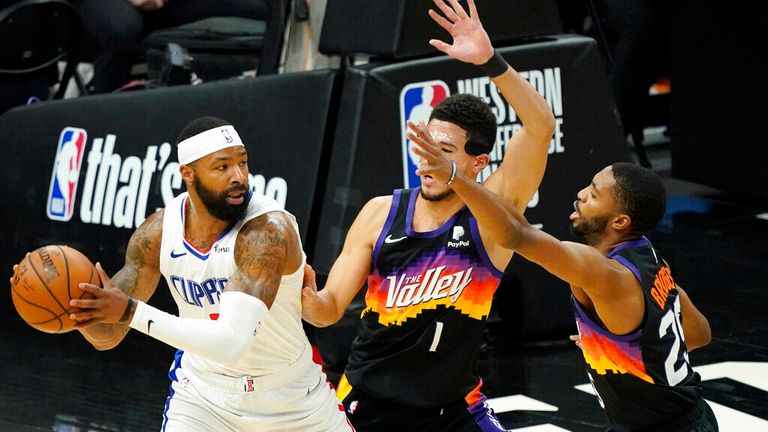 The Suns are trying to make their first NBA Finals since 1993. The Clippers have never been this far in the postseason. It's all set up for another showdown at Staples Center on Wednesday night at 2am, live on Sky Sports Arena and Main Event.

Paul expects his team to respond in Game 6.

He added: "We know we go in there, a place where we won last time. We know they're going to be excited and ready to go so we will be ready.