MVP race and Seattle storming: What to watch in the second half of the WNBA season

As the second half of the WNBA calendar tipped off over the weekend, there are some key areas of interest as teams battle for playoff contention and seeding during the final few weeks of the regular season.

The race for eighth

While the Indiana Fever are well out of the playoff race, most teams have around 10-12 games left and even the 6-14 Atlanta Dream will play at least six against winnable games, and nobody would count out a team led by Courtney Williams.

It won’t be easy as the first half of the season was turbulent with coaching changes and issues in the locker room, but adding the steady presence of Candice Dupree can offer this team leadership and a reliable post presence.

The Dallas Wings were slow to get started as players returned from overseas and some missed time for EuroBasket, and they will always be a threat with Arike Ogunbowale.

A key game will take place this weekend on Sky Sports. The LA Sparks have healthy talent returning in Nneka Ogwumike and hopefully Chiney Ogwumike, and they will be facing off against the much improved - and currently seventh-seeded - New York Liberty.

At 10-12, the Liberty have added Natasha Howard and Sami Whitcomb, adding veteran leadership to the two young stars who are ready to win now in Sabrina Ionescu and Betnijah Laney. They are currently in playoff position, which is a big step up on last season when they finished last, but they face a rough run toward any success in the post-season so will want to move up to get home-court advantage.

Meanwhile, Ogwumike is keen to avenge her lack of selection for the Olympics and wants to get her team back in the playoffs after finishing outside last season.

Can anyone stop the Storm?

It’s not like the Seattle Storm are running away with a regular-season lead over everyone else, but this team turns up when it needs to.

Take, for example, the season opener. It was a WNBA Finals rematch from last season against the Las Vegas Aces, and with Liz Cambage, Kelsey Plum and Dearica Hamby back in the line-up after missing the Finals with injuries and sitting out the season due to Coronavirus, you have to think the Aces wanted that win badly. Highlights of the regular season game between the Seattle Storm and the New York Liberty in the WNBA.

The Storm beat them by 15 points. Las Vegas got their revenge three days later by flipping the script, and beat them again later in the season, but the season opener sets the tone for the season.

Seattle also beat the Connecticut Sun - the other top tier team this year - twice in the first half of the regular season, once with and once without the leader Jonquel Jones. Then, despite Breanna Stewart, Jewell Loyd, Sue Bird, Ezi Magbegor and Stephanie Talbot returning from playing at the Tokyo Olympics just a few days earlier - as well as Stewart becoming a mother and Katie-Lou Samuelson recovering from Covid-19 - Connecticut couldn’t beat the Storm to win the Commissioner’s Cup, despite being well rested.

The Storm have a knack for turning it on at the right time. They might take their foot off the pedal once a top seed is secure and they have a single or double bye during the first rounds of the playoffs, but when they get there, their focus and championship mettle is unmatched.

During the first half of the season, few would argue against Jonquel Jones of the Connecticut Sun being a length ahead of the competition. But it’s definitely a three-horse race coming down the final stretch, due to Jones losing some ground while competing in EuroBasket.

Breanna Stewart can’t stop winning, and another WNBA MVP trophy isn’t out of reach for the best player in the world. As long as the Storm are competing well as a team, she will be in the running for the individual trophy.

A’ja Wilson rounds out the top three. It will be more difficult for her this season compared to last, when she won the award, partly down to the help she has on the team this year.

Being without Liz Cambage, Kelsey Plum, and losing Dearica Hamby and Angel McCoughtry last season made it harder for the Las Vegas Aces to win a championship, but made it that much more impressive that Wilson was able to lead her team to the Finals. She was also considered by many to be the best player on Team USA’s gold-medal-winning squad in Tokyo, and her career high in rebounds and assists, along with averaging nearly 20 points, shows that she isn’t deferring to the extra talent around her and she is being assertive as the team’s leader.

There are a couple of outside bets. If Candace Parker can play all of her games for the rest of the season - after a tough stretch health-wise to start the year - and the Chicago Sky win a large bulk of those games to climb into the top tier, the two-time MVP could get some votes toward a third trophy.

And the perennially overlooked Sylvia Fowles has helped the Minnesota Lynx keep pace with some of the best teams in the league, despite many counting them out of contention as the season started.

Can the Mystics make a run?

The Washington Mystics are currently battling for the eighth seed. In fairness, that’s quite an achievement considering the 2019 WNBA champions have been without former MVP Elena Delle Donne, Finals MVP Emma Meesseman, and the likes of Natasha Cloud, Myisha Hines-Allen, Shatori Walker-Kimbrough and Erica McCall have all missed time this year.

With some good health and the potential return of the team’s two most important players - not to mention the great coaching of Mike Thibault - this team could make a run. 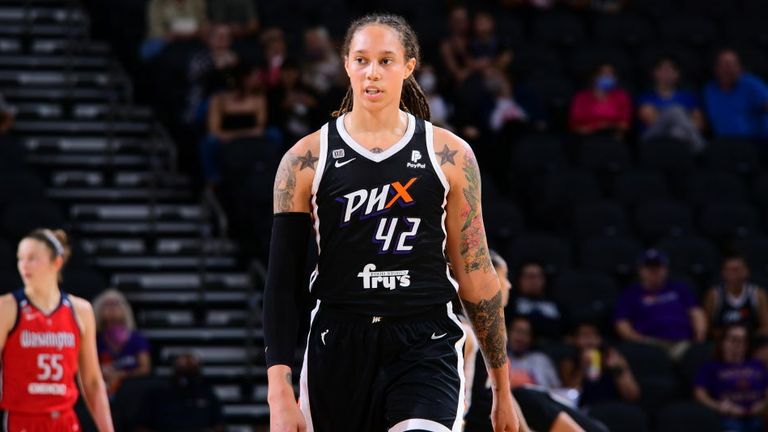 Highlights of the regular season game between the Washington Mystics and the Phoenix Mercury in the WNBA.

The players who have been keeping Washington afloat are Tina Charles and Ariel Atkins. Both return from travelling to Tokyo for the Olympics, so there is a question about fatigue setting in during the second half of the season. Equally, as the Seattle Storm showed in the Commissioner’s Cup final, there is a lot to be said for staying in rhythm when the rest of the league stops play.

How well they can play with Delle Donne back in the line-up for some games and, hopefully, Meesseman potentially returning will determine how far they rise up the playoff seeding. If the Mystics are at full strength heading into the post-season, few teams would want to cross their path on the way to a championship.