Ben Simmons is going from one pressure cooker to another with his move from Philadelphia to New York City.

He won't suddenly find a less demanding fan base, or a more understanding media.

If Simmons was hoping to quietly resume his career out of the spotlight, it won't happen in Brooklyn. The Nets are a title-contending team playing in the biggest market with lots of national TV games. Their every misstep along the way gets dissected.

The Nets can't provide Simmons with cover from that.

They do have someone he knows who can help him deal with it.

"I've got his back," said Nets guard and fellow Australian Patty Mills. "I've always had his back and now I have an opportunity to be with him."

They were originally expected to be Olympic teammates last summer for Australia, where Mills is a basketball icon in a nation that loves its sports. He was one of the country's flag bearers in Tokyo, the first Indigenous Australian to carry the flag at an opening ceremony.

Simmons, stung by postgame comments from 76ers coach Doc Rivers and center Joel Embiid following a Game 7 loss to Atlanta in the second round of the NBA playoffs, decided not to play for the Aussies. Despite his absence, Australia took home the bronze for its first medal in men's basketball.

Perhaps being around Mills and the close-knit Aussies could have helped Simmons quickly replace a bad basketball memory with a happy one. Mills decided during the Olympics to leave San Antonio and sign with Brooklyn and now wants to make sure Simmons feels welcomed there.

"I've had his back from afar and I wish I was with him earlier in his career, but being able to do what I can from afar," Mills said. "I'm excited to be with him in these aspects and help him in every way necessary."

Simmons had determined he wasn't going to find the support he needed anymore from the 76ers. Even if the responses from Embiid and Rivers that had upset him last summer were strictly basketball related, Embiid's remarks this season that it wasn't his job to babysit certainly could have been alarming for Simmons after he cited mental health reasons for not playing.

It's not unfamiliar territory for the Nets.

Kyrie Irving took a leave of absence from the team last season and the Nets never outwardly pressured him to come back. Nor has management or teammates publicly lobbied him to get vaccinated against the coronavirus, which would make him eligible to play in home games he continues to miss.

Those experiences could help in support of Simmons. 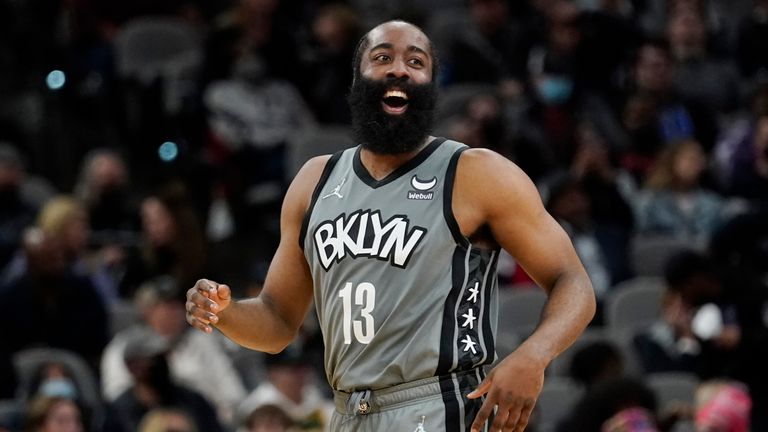 "We're thrilled to get him on board and we'll be here to support him from a physical standpoint, from a mental standpoint and get him engaged and get him around our group. I think that's cathartic unto itself," general manager Sean Marks said. "When you have a guy who obviously needs - everyone likes their arm around each other and a hug every now and then, and support and so forth."

Irving said he just wants Simmons to find peace, just as he hopes James Harden will in Philadelphia. And having previously sought his way out of Cleveland and then Boston, he recognizes the emotions that led to Simmons wanting out of Philadelphia and Harden to sour on Brooklyn.

"Sitting in a position right now, going through my own personal battles throughout the season last season and even the year before that, and just being more empathetic to what people are going through," Irving said of his understanding. "If someone isn't happy in the job that they do or being around a group of individuals, I've just really learned to sit back, be patient and allow them to make their decisions."

So Simmons should find people who respect his needs in Brooklyn, most of all Mills. The guard has known his new teammate and family since Simmons was growing up in Australia, before the younger Aussie moved to the U.S., played a season at LSU and went on to be the No 1 pick in the draft.

Mills said lately he has spoken a bit with Simmons, and said Simmons was working hard to get his body and his game ready to return to NBA action.

The Nets might be able to help get him to an even better one.