LeBron James: Fans can boo but don't tell me how to play basketball LeBron James says he is supportive of the Los Angeles Lakers faithful whether they boo him or the team but insists he will not accept fans lecturing him on his game.

The Lakers suffered their sixth loss in seven games despite erasing a 21-point deficit in just over 12 thrilling minutes spanning half-time against the Dallas Mavericks. Los Angeles managed only four points in the final seven-plus minutes to eventually succumb 109-104 at Crypto.com.

Two nights after the Lakers were booed by their home fans in a lifeless blowout loss to New Orleans, James and his team-mates had the crowd applauding their effort and comeback either side of half-time, but the eventual result was another defeat.

During that clash to the Pelicans, James had seven turnovers and was booed at time after ceding possession and a video emerged of he and some of his team-mates getting into a spat with Lakers fans courtside.

"If you follow my career, I will get into it with a fan so that wasn't anything out of the ordinary for me," he said when asked about it in the press conference following the more recent defeat to Dallas. "No matter if it's a home crowd or someone on the opposing side.

LeBron James, who scored 26 points and grabbed 12 rebounds against the Mavericks, says fans can react how they like and he will still be supportive towards them.

"I ride or die with the Lakers faithful," he said. "If they scream, I'm with them. If they boo, I'm with them. That stuff doesn't bother me, man. I'm 20 years into this league. A boo here, a boo there, a cheer – whatever they want to do, let's do it. We're all together."

What is not all together is the Lakers team, with Anthony Davis out right now dealing with a right mid-foot sprain that could well sideline him for the remainder of the regular season and at the least next four weeks where the Lakers have 10 games on the road. 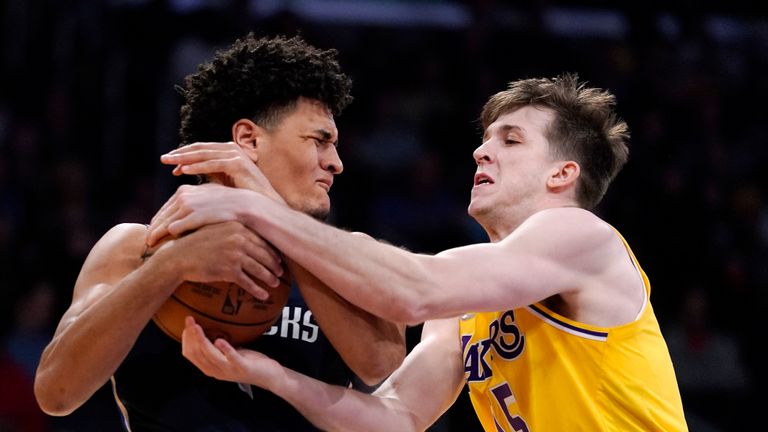 Los Angeles has lost 15 of 21 to slide a season-worst seven games below .500, with even its position in the postseason play-in tournament looking increasingly tenuous. Los Angeles is 0-3 since the All-Star break.

James himself has missed 17 games this season and is still having trouble with a niggling knee injury but despite the Lakers' struggles and him being very much in the veteran stage of his career, he is not planning on shutting himself down at any point.