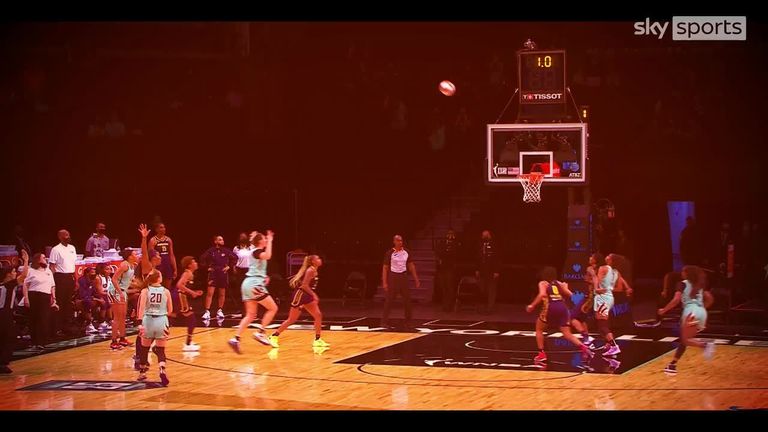 The WNBA will begin its 26th season this weekend with several intriguing storylines, including the potential retirement of Sue Bird and Sylvia Fowles, the return of Becky Hammon as a coach and the absence of Brittney Griner.

There is no bigger headline engulfing the league than Griner.

The Mercury's All-Star center remains in Russia after being detained following her arrival at a Moscow airport on February 17. Russian authorities said a search of her luggage revealed vape cartridges that allegedly contained oil derived from cannabis, which could carry a maximum penalty of 10 years in prison. Griner's status has been changed to "wrongfully detained" and she has a hearing scheduled for May 19.

But Griner's presence will be felt even in her absence.

The league plans to honour Griner and keep her ongoing situation front and centre with a floor decal that will feature her initials along with her number 42. It will appear on the home court of all 12 teams starting with Friday's season openers. The regular season ends August 14.

Teams will play a record 36 games this year.

"The 36-game schedule will provide fans greater opportunities to see the best players in the world compete at the highest level," WNBA Commissioner Cathy Engelbert said when it was announced in December.

Before Griner's arrest, the Mercury made many moves in the offseason to put the team in contention to win another championship after losing to Chicago last season in the Finals. Phoenix added Tina Charles and Diamond DeShields to the roster to compliment Diana Taurasi and Skylar Diggins-Smith.

DeShields joins the Mercury from the Sky, who will try and become the first team to repeat as champions since the Los Angeles Sparks did it in 2001/02. Chicago added Emma Meesseman - the 2019 WNBA Finals MVP - to its roster.

Then there is the looming retirement of All-Stars Bird and Fowles.

Bird, the league's all-time assist leader, has said all signs are pointing toward this year being her last with the Seattle Storm, but she does not want the upcoming season to be a farewell tour.

Fowles has stated she will retire after this season. The WNBA's all-time leading rebounder said it was a tough decision whether to come back for a 15th season or not.

With Fowles and Bird having a foot out the door, the league welcomes back Hammon this season.

Hammon took over as coach of the Las Vegas Aces, replacing Bill Laimbeer, after serving as an NBA assistant coach for the San Antonio Spurs since 2014. She's one of six former players who are now head coaches in the league.

No team went through more injury problems the last two seasons then the Washington Mystics. Coach Mike Thibault hopes his team has finally put all that bad luck in the rearview mirror and is looking forward to having Elena Delle Donne and Alysha Clark in the lineup.

Delle Donne has only played in three games the last two seasons because of COVID-19 concerns and back issues. The former league MVP last was on the court fulltime in 2019 when the Mystics won their first championship. Clark missed last season, which would have been her first in Washington, due to a Lisfranc injury in her right foot.

The league is bringing back the Commissioner's Cup for the second year. The in-season tournament was won by Seattle last year. The Storm beat the Connecticut Sun in the championship game, which was played in Phoenix. There are 10 designated "Cup games" per team - the first home game and first road game each team plays against its five conference rivals.

Fresh starts for some WNBA All-Stars

Meesseman, Charles and DeShields aren't the only players in new places this season. Liz Cambage now calls Los Angeles home after leaving Las Vegas. The 6-foot-8 Australian center will try and get the Sparks back into being championship contenders. Courtney Williams returned to Connecticut after spending two seasons with the Atlanta Dream. The Dream picked up former WNBA All-Star MVP Erica Wheeler.

As well as the WNBA season tipping off, the rush of live NBA Playoffs games continues on Sky Sports this week - see the list of games here and subscribe to watch the live action.