Every sport has its icons and rock stars - those whose exceptional talent combines with a brilliant personality - and few could argue against Layton being one in the world of netball.

Her passion and character has made her one of the most recognised and loved netballers in the world and following her retirement in 2018, she turned her athletic focus to Aussie Rules.

Right now, like everyone across the globe, she is adapting to a new normal but is grateful to have been able to complete a full AFLW campaign prior to this point.

Then, as soon as Australia's levels of restrictions regarding social distancing became clear Layton, who says she cannot sit still for 10 minutes, immediately set about finding something to occupy herself with.

"On the Monday finding out about everything I thought, 'Well I'm unemployed really' because most of my work is normally speaking etc. and that's been cut. So, I went and looked for a supermarket job, thinking I could work at Coles.

"After looking for Coles jobs on the Monday, the day after I got a call from Sarah (Walls) about the netball training app NetFit.

Layton is someone who has always been open about mental health issues and the tussle she has had with them during her sporting career. With her former routines being lost, she explained her route to using exercise as an outlet.

"I do get very lazy and what I need to remind myself is that action comes before motivation," she said openly.

"For three weeks I was supposed go for a run and I didn't. I just had to give myself a good kick up the butt and drag myself out of the house for it. I went and felt great... just getting out of the house was so beneficial.

"I wasn't going out of the house because I was feeling rubbish but then after just doing it, it helped get me into my new routine that I do have to stick to during these times.

"No one is perfect, no one is going to do it perfectly all of the time," she added. "But, the difference between when I'm feeling good and bad - getting outside and getting fresh air and exercise makes a huge difference."

Layton's list of netballing honours is an all-encompassing one, which included twice being named the international player of the year, securing a Commonwealth Games gold medal and back-to-back Netball World Cup titles.

Throughout her career, she saw first-hand the importance of having a strong captain on court - whether that was performing the role herself or being under the guidance of others.

With England's captain from the Netball World Cup, Serena Guthrie is currently taking time out and deciding on her future plans, Layton and Tamsin Greenway first discussed Guthrie's Roses role on Off The Court.

"I think if she's not in that England team there's always a massive hole there," Layton said of the mid-courter.

Serena Guthrie joined Off The Court and discussed the importance of taking time out, the opportunity awaiting England in 2022, and gardening!

"She's that ferocious player who will go and go… you can have the best starting seven in the world but within it you need that player who can just push through and grind it out.

"It's not a netball skill as such, but to be able to change momentum and get an intercept at that moment when your team needs it is vital.

"I like to call those type of players, winners.

"They're just born that way and Serena is one of those players. I've known her since she was 15 and she always had that capability on court.

"I think that giving her the captaincy [for the World Cup in 2019] needed to happen. But, I actually think if she does come back in, leaving someone like Natalie Haythornthwaite in charge would be really beneficial for Serena.

"She has got that temperament where you can wind her up, and that's probably her only weakness in her game. Sometimes it pays off and sometimes it doesn't. To take her out of that captaincy role and just give her the opportunity to just be that winner [could be good].

"It will really depend on how England rebuild this new culture under Jess Thirlby. I don't think that it will be a bad thing if Serena chooses to come back in and then isn't captain."

Both Layton and Greenway have played under countless captains during their respective careers and a key question for both, is who stands out above the rest?

"Back in the day, my first ANZ team was the Adelaide Thunderbirds and Natalie von Bertouch, who was also the Australian captain, was my captain there," Layton said.

"She was very similar to someone like Laura Langman and had it all. She had the ability to read the play and pull in the winning intercepts when it mattered. The ability to give the pass that would go through for the winning goal of the game but she was also really calm. 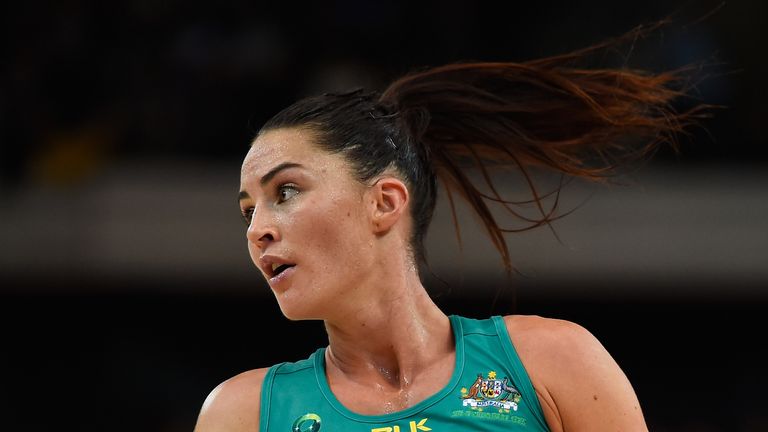 I've been really fortunate to have been surrounded by phenomenal leaders throughout my career. The one thing about every single one of them is that they know who they are off the netball court. They might be strong on the court, but they're stronger off the court.

For the Australian Diamonds, who are currently looking for a new head coach after Netball Australia parted ways with Lisa Alexander, Layton believes there's a strong on-court leader emerging and also time is needed for players to develop as leaders.

"Liz Watson is coming through as the vice-captain and I just think that she's absolutely the right person for that role to be able to step up into that captaincy role," the former Diamonds leader noted.

"I remember when Laura Geitz came into the captaincy position back in 2012/13 and how much pressure was on her.

"We are the same age so she was only 24/25 at the time. She came into that role and then we got spanked by New Zealand in the very first Test - that was the best lesson that she could have had.

"We all supported her and she developed over time. She wasn't the captain she became when she was first put in there.

"I think that you want to keep someone like Natalie Haythornthwaite as a captain [for England] and then if you were to bring Serena back in, Natalie could still develop as a long-term leader of the Roses. That would be really positive."