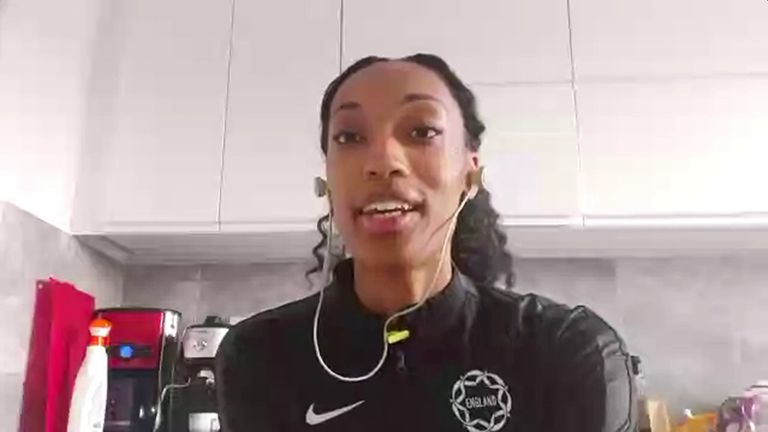 Layla Guscoth joined Sky Sports' The Netball Show and discussed the unity on the frontline and her personal belief that England isn't quite ready for sport yet.

The defender, who chose to step away from international netball to complete her medical training, has been working on the frontline in Birmingham since returning from Adelaide at the end of March.

Prior to the pandemic, Guscoth was preparing to step back onto a netball court for the first time since July last year.

The scenes of her Achilles injury happening at a home Netball World Cup were difficult to watch however after going through a painstaking rehabilitation process, she should have been back on court with Thunderbirds in Super Netball now.

However, as she shared with Sky Sports at the beginning of April, "everything changed" when coronavirus happened.

Layla Guscoth shares her experiences going from Achilles rehab in Adelaide back to working as a doctor at the Queen Elizabeth Hospital, Birmingham.

The change in global circumstances resulted in her instantly flying back to England and returning to the Queen Elizabeth Hospital in Birmingham where she had previously work. The changes continued from that point on, as she shared.

"I moved out of my family home and I'm living with other doctors. Knowing that you'll be exposed to things on a daily basis, it's not something that you really want to take home.

Every member of Guscoth's new household works in a different hospital across the city of Birmingham and joining The Netball Show on Wednesday, she provided an insight into working at the Queen Elizabeth.

"It's quite different to how it was before I left. They've got rid of all of the normal rotas and allocated some of the wards to be COVID-19 wards and then others aren't.

"At the moment, I'm on a rotation where we work long days - so we work 8am to 9pm four days a week and then we get four days off. We also work some long night shifts as well.

"The daily routine in the hospital is the same as usual, ward rounds and seeing lots of patients. It's been very busy, and it's been quite difficult. There's a good energy and a good vibe around the hospital though.

"I think the hospital has been quite remarkable in how everyone has come together. There's a sense of unity. All of the doctors, nurses, physios... everyone has really come together and there are some good support networks.

"There are days which are a lot harder than others, but I think we're well equipped for it from the usual job [that we do]. It's been tough but the support and everything, for me, has been there. It's been encouraging to be a part of."

Vitality Roses head coach Jess Thirlby shares some of the complexities netball faces with regard to returning, but stresses a great desire for it to be back stronger.

As both an elite athlete and a doctor, Guscoth is in a unique position in terms of seeing what's happening on the frontline and also understanding the sporting landscape in detail. From her own knowledge and perspective, she believes that the country isn't quite ready just yet.

"It's a really tricky one. For me personally, I don't think that as a country we're ready yet [for sport].

"I've seen huge improvements in the admissions that we're getting into hospital but like everyone in the country when I flip on the news for the government briefing, it does make me nervous knowing that I don't think we're quite there compared other countries.

"However, I would love to see sport and have a netball season in some capacity when things are safe to do so.

"For me, safety has to be first and I don't think, at this second, it looks like we're ready for that."

For Guscoth, like so many, netball holds a particular place in her life and understandably given the intensity of her work, it's one that she's missing right now.

"I think that escapism is the word. Netball has always been a release from work," she said. "It's great to hang out with people and fill your evenings playing sport.

"It's not just for me, I think for everyone it's a really difficult time to not have that release.

"I'm trying to keep on top of training and to keep going with things. There are days when I really can't be bothered [to train] but generally I am trying to do what I can.

"You do feel better after doing it. Sometimes when you're sat at home or you've had a bad day, you don't want to but once I get out and go for a run it does feel better.

"I'm struggling to get used to running on concrete! I think we're lucky to have these nice sprung courts all of the time. It's been good and I've been trying to ZOOM people to do sessions too - Laura Malcolm and I have a plyometric session together."

It's clear that when netball does return in the future, Guscoth will be ready physically and the release it will provide mentally, will be an incredible one.

For now, she's using the characteristics that she's known for on court - remarkable composure and fortitude - to manage her life off it. A life happening on the frontline, in the face of immense pressure, and that's saving people's lives.