Tamsin Greenway: Super Shot has potential to bring back something netball has lost

"In so many other sports, the goal is the exciting part of the contest, yet in netball it's just become an expectation. I like the idea that this Super Shot brings back the 'Wow' factor"

Tamsin Greenway ponders the fall out of Suncorp Super Netball's new Super Shot and considers whether it offers the chance to bring back a skill and some of the excitement that does not always exist in netball's shooting circles.

Since the announcement by Suncorp Super Netball (SSN) regarding the introduction of the two-goal Super Shot, it has been the most talked about topic in netball.

The Super Shot will be introduced by the league when it starts on August 1. It means goal attacks and goal shooters have the chance to score two goals by scoring from a 1.9m designated zone within the goal circle. This zone will become active in the final five minutes of every quarter.

The announcement caused a huge number of conversations across social media and before I tell you why I think it's not the 'disaster' that many believe it to be, let's firstly address the way in which it was announced, which in my opinion was simply wrong.

Seemingly the players, coaches, clubs and officials were not aware (or given a proper heads up) before the new rule was announced. It seems like the Super Shot was just tagged onto the good news that competition will be returning this year.

Rightly, the teams are upset and have voiced their many frustrations. Announcing something of this significance without proper consultation and with just six weeks to go before the new season was always going to upset people. It's not professional and leaves our sport open to negativity.

The other issue I have is regard to the fact that SSN conducted a survey with fans about the two-point shot. The results of it were published on their website. Alongside some positive comments, netball fans mostly expressed their displeasure and the responses on social media largely fell into that negative category too.

If the Super Shot was always going to be a serious rule change, why put a survey out? There was always a risk fans are going to say that they hate the idea, why ask them the question if you are going to do it anyway?

My personal opinion, is that the way in which the Super Shot has been implemented has been quite backhanded; teams, fans, clubs and officials deserve better.

Orright well this going to be unpopular but ... I don’t think that the @SuperNetball 2 point goal will be the disaster that is being predicted. I love old school netball when players just turned and shot where they were in the circle rather than stuffing about with the ball.

However, now it is in place, I believe if the Super Shot can benefit the sport. Netball should not be afraid to be brave and to embrace change.

Looking at the wider picture; netball still needs to grow its worldwide fan base. There's still a lot of work to do on that, as is the case when it comes to the commercial side of the game.

If we want the sport that we love so much, to become more financially viable and to have fully professional leagues without financial troubles across the world, we need to grow its commercial value.

Now, I'm not saying we need to jeopardise netball's integrity in order to do that, but if you are telling me adding a two-point rule might gain more fans, increased exposure or entice sponsorship, then I do not see the harm in it.

This rule - a two-point zone within the existing area of the circle for five minutes at the end of quarters - is not a major gimmick. It is not like we are asking people to shoot from outside the circle with their eyes closed… we are just giving a few more points within the same circle for technically a harder skill.

I think sometimes we all get caught in our netball bubble and can be naive about our sport. As traditional netball fans we love netball and in our ideal world everyone else would too. They would love the non-contact, restricted areas, footwork and whistle.

I always come back to the thought of, what is the worst that can happen with this? The worst is that it does not work and then it gets removed again. As long as there is a process to evaluate what success does, or does not look like for this rule, I think we can try this.

Other sports seems to adjust and adapt in order to evolve and try and improve; football changed the offside rule, basketball introduced the three-pointer and rugby continually reviews their laws including their points system to encourage different play.

That's why I just don't see the harm in trying this Super Shot. Maybe it's because I don't feel it's fundamentally changing the game; I'm still seeing a shooter turn and go to post…how coaches and players interpret it will be the key, sure different scenarios will encourage certain outcomes, but it will become a tactic like everything else.

genuine question, there’s lots of ‘death of netball’ & ‘completely changes the game’ going around on here this morning. Can you tell me exactly which part of it you dont like and why you think it’s so drastic, game changing and detrimental? @SuperNetball @SkyNetball #supershot

After the announcement from SSN, I took to social media to find out fans' thoughts. Not surprisingly, many shared objections and it was great debating and understanding people's concerns.

There were fears about the missed shot, but I personally think the Super Shot has the chance to bring back the art of something that we have lost; long-range shooting.

Last summer in Liverpool, New Zealand won a whole competition doing just that. The ANZ Premiership shows long-range shooting is still part of their framework, yet across many major netballing nations and teams, it's largely been lost.

I agree shooting from outside of the circle, like in Fast5 becomes a bit comical. Shooters do not practise that and it's really hard with netball's shooting technique and the post to convert consistently from that sort of distance.

However, shooting from two thirds out, is something that the top shooters do every day in practice, they just don't regularly do it in a game anymore. Why? Well, that's because it's a percentage game and in the last five or six years we've become quite elitist in the goal circles.

Tall, target shooters under the post, have become 'the norm' and emerging players have struggled to make it if they are not around that 6ft mark, I'm actually hoping this long-range shot will open the circle back up again.

Yes agree, BUT only if shooters can actually shoot consistently from there? Everyone had to tactically change their game to play NZ at NWC. That’s your job as a coach. When Aiken first emerged on the scene we had to stop a 6”5 shooter. You plan for each team every week. https://t.co/yZClspPbvs

On the subject of tactics and how this Super Shot will change them, I struggle with the notion that people are going to pass the ball back so shooters are in the Super Shot zone, any more than they do already to get in their perfect position under the post, we are just used to that.

As a coach, I would not coach very differently for the introduction of this new rule because it's for five minutes at the end of a quarter, and the points are not hugely different.

I would not be saying to my players that they needed to constantly get it into the two-point range and shoot from there. If I was ahead and playing well why would I do that? Instead, I would keep the scoreboard ticking over (as I always like to do) and I would let my players decide; if they are shooting well and are happy with what's going on, then go for it.

Also, you would look at the team that you were up against. If I was facing someone who I knew could shoot from distance, then I would work out what to do with them in those last five minutes.

You have to do that anyway when it comes to key players, you always have a method of trying to limit their influence and this is no different. It's nothing new. Attack and defence tactics are constantly evolving and it's your job to work that out as a coach.

Ok, But why? As a coach I wouldn’t coach that. I’d still be working on the same principles of getting the ball to goal. The decision would be on the score, if you can shoot from there. It doesn’t mean that I’d just say go for it, unless you were 10 down?! https://t.co/m4olo8VdF3

On the subject of major blowouts on the board, if you look really logically at how you break the game down, then it's unlikely that there will be huge swings which wouldn't have happened anyway.

Fast5, how it's played in England with a double-points bonus period, gives teams the potential to score 10 points. That's so different. The new Super Shot rule adds one extra goal, so as long as your both playing well it should not be a massive swing.

Maybe I will be wrong and the whole game will change, but I do not see how the new rule equates to a messier game and massive blowout of scores. Plus, the way I see it, is a six-goal loss any worse than a 12 goal loss? I actually think it gives teams ways to stay in the contest - and I do think that it brings an element of excitement.

Maria Folau was the best player in the world at shooting long shots, and we never got tired of her shooting from distance. If anyone talks about her work on court, it's in such a positive way. Fans want to shoot like her and that's because she could put the ball in, from anywhere in the circle.

I'm not sure I can name another player who we talk about like that? She's was in a class on her own… there's just not been another like her.

In netball, we get excitement from players who intercept the ball and from speedy mid-court players who have amazing footwork, a high jump and who thread the perfect pass, but do we really get the same excitement from seeing a tall shooter put goal after goal in from under the post? 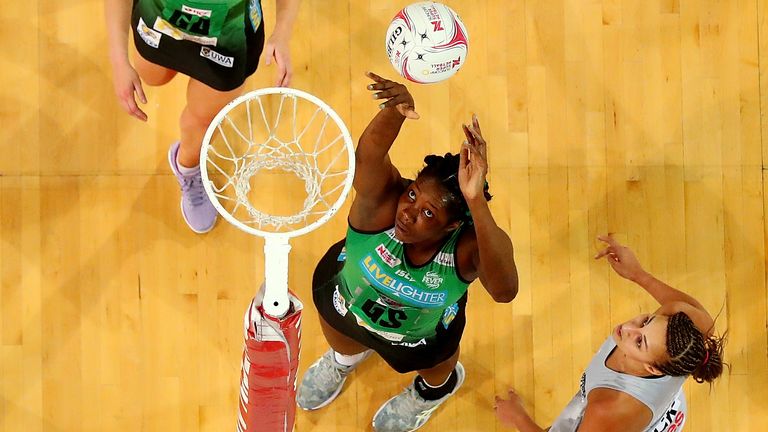 In so many other sports, the goal is the exciting part of the contest, yet in netball it's just become an expectation. Once the ball enters the circle; with so many attempts and such high percentages, the expectation is that it goes in. I like the idea that this Super Shot brings back the 'Wow' factor.

We as netball fans are so passionate, something that will never change. I always talk about netball as the best kept secret; if you're involved in netball, you love it and think it's the best game ever, but I also understand that people outside of the game don't always see it that way.

With Super Shot, it's time to see if it can give netball a new audience, new talking points and new stars. If not, I'll quite happily return to the traditional game.

It certainly going be interesting to see how it plays out when the league starts on August 1 and until that point, I expect that the debate will continue in earnest.