Vitality Netball Superleague: Round Seven will build on outstanding start to 2021 season

Coverage of Round Seven of the Vitality Netball Superleague commences on Sunday, with four matches streamed back-to-back on the Sky Sports YouTube channel from 12pm. 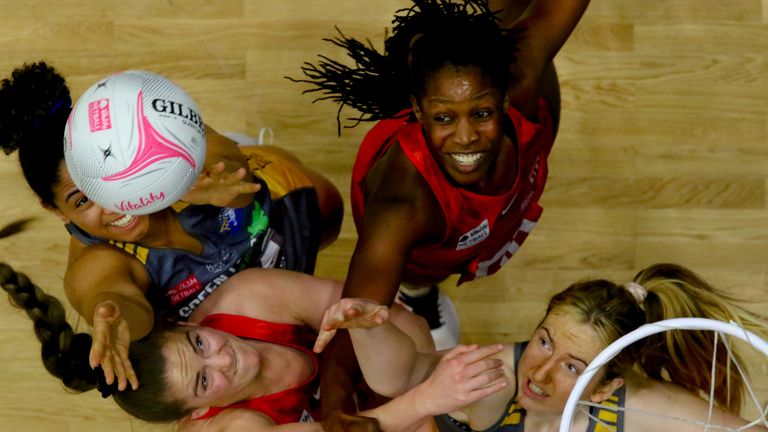 The Vitality Netball Superleague continues on Sunday with the seventh round of the competition, which includes Manchester Thunder looking to bounce back folllowing successive defeats.

The 2021 season is being played behind closed doors across two venues - Studio 001 in Wakefield and the Copper Box Arena in London - and every match is being broadcast on Sky Sports across various platforms.

Matches streamed on the Sky Sports YouTube channel have already been watched by over 795,000 people and this weekend delivers six more outstanding contests.

After six rounds, Loughborough Lightning lead the way at the top of the table having only lost once. This round, they will be analysing the action from home as they have a bye weekend.

Lightning are closely followed by the impressive Team Bath Netball, who blew away the 2019 champions Thunder last weekend and are facing Strathclyde Sirens on Sunday. The two-time champions Wasps Netball are currently sitting in third.

Here we take a look at some of the key talking points ahead of Round Seven...

Thunder aiming to bounce back

Last time out, it was a double-header weekend for the 2019 champions Thunder and they were faced with the prospect of meeting Team Bath Netball and Wasps Netball on consecutive days.

After enjoying three successive wins, by 17, 27 and 33 goals respectively, Thunder were set to be 'tested' for the first time, but nothing went their way during Friday's encounter with Bath.

Following the 60-35 defeat, defender Kerry Almond summed up their feelings on social media and with Wasps netball on the horizon less than 24-hours later, they had little time to process that match.

When it came to their meeting with Mel Mansfield's team, Wasps started the faster of the two and then held-off Thunder in the second half with a tidier performance.

Manchester Thunder - The Season So Far...

"It's back to the drawing board and rockets up some back sides this week," Greig said after their second successive loss.

"We are making tired errors I think, sloppy errors that you look at [and don't enjoy]. We know that if we can put scoreboard pressure on a team, then we've got every chance of pulling back, because we're a team that are capable of doing that."

Greig added they need to put themselves under "real pressure" at training this week and raise their intensity. Needless to say, all of the signs point to Thunder launching into round seven and delivering a ruthless 48 minutes of netball.

The team with the task of weathering that storm are the only side yet to record a victory this season, Celtic Dragons. Tania Hoffman will have enjoyed an equally big week getting her girls ready for Thunder's wrath and they will need to move up a number of gears if they are going to hold their own on Sunday.

Foot on the gas for Pulse and Stars

Sam Bird's Pulse disrupted leaders Lightning on Sunday, before flying against Celtic Dragons and gaining their first win of the season in style.

Melissa Bessell's Stars edged out Surrey Storm at the start of round five and then put Team Bath Netball off their game the day after.

In short, both teams will be coming into round seven with renewed confidence and eager to get back out on court.

Pulse's encounter with Saracens Mavericks on Saturday should be an enthralling one, as there are match-ups all over the court. From Halimat Adio marking Ine-Mari Venter and Sigi Burger facing Razia Quashie, to Funmi Fadoju potentially coming up against Sasha Corbin.

Saracens Mavericks have not quite found their flow yet this season and with Pulse's boosted confidence, it could be a close encounter.

Meanwhile, Stars will be up against Leeds Rhinos Netball on Monday night. Head coach Bessell will be eager to use Georgia Rowe's experience in the circle and she will want her captain Nia Jones to step up in defence and disrupt Rhinos' attack end.

Dan Ryan's Rhinos have shown already how determined they are, and that their defensive style is one that disarms teams, so it should be an intriguing encounter.

Strathclyde Sirens are playing with smiles on their faces and they are enjoying their best start to a Vitality Netball Superleague season.

In pre-season, their technical director Karen Atkinson spoke to Sky Sports about the franchise's potential and explained how they had started to show what they could do just before the 2020 season was cancelled.

"I heard people using the words unfinished business [about the 2020 season]," Atkinson said.

"I think for us, it was more about the fact that we were starting to get close to the potential that we have in Scotland and then to have that massive break, just wasn't really ideal."

However, Atkinson and head coach Lesley MacDonald clearly managed the period between seasons well, as their team have three wins under their belt and go into this weekend with a feeling that it could have been four after their 34-34 draw with Mavs.

Sirens' mid-court trio of Nicola McCleery, Gia Abernethy and Taylor Cullen are working tirelessly, Towera Vimkhumbo is making jaws drop with her interception, and in attack, they have stepped up after losing Lynsey Gallagher to a significant knee injury.

With back-to-back matches against the two-time champions Wasps Netball and Team Bath Netball, this weekend marks another step up for Sirens. For Atkinson, Sunday and Monday will be about her team raising their intensity and showing that they can handle that next level up.

Sky Sports is your home of netball. The Vitality Netball Superleague continues on Sunday, with four matches streamed live on the Sky Sports YouTube channel for viewers in the UK and Ireland from 12pm.