Jess Thirlby: England not in market for 'wholesale changes' ahead of Netball World Cup

England's head coach reflected on their Commonwealth campaign; "The review has already started. It will hopefully finetune where we need to make incremental changes, but certainly, what I’m not hearing is wholesale changes"; the Roses return to court in October, live on Sky Sports

Jess Thirlby is not looking towards "wholesale changes" as England reflect on their Commonwealth Games campaign and look towards next year's Netball World Cup in South Africa.

Despite missing out on a medal in Birmingham, the head coach does not foresee sweeping amendments being made as they now look towards two further Test series this year and next year's major competition.

At the Commonwealth Games, England fell to a 60-51 defeat at the hands of Australia in their semi-final and then lost by seven goals to New Zealand in the bronze medal match.

Speaking to England Netball around 10 days on from the conclusion of the Commonwealth Games, Thirlby first reflected on the level of competition during the tournament, which concluded with a first final between Australia and Jamaica.

"The margins now between second, third, fourth are so slim that you'll get punished," England's head coach said.

"Do I think there were moments in games where weren't at our best? Absolutely, because there were moments with a little bit of vulnerability and we weren't quite as clinical as we needed to be when we won ball, which was hard to find against the better teams.

"I would be reluctant to move straight into that space of, we could have been better... what if some of what we did was our best on the day? Yes, there are areas I already see that we will want to look back on and better ourselves performance wise and think about how we might go about that.

"Part of that will be bigger picture stuff around more exposure, big stages, bigger cauldrons and we will do that.

"We will uncover and excavate everything we need to in order to be better. But, I would not be too tempted to think about wholesale changes or that we were way off the mark.

"On any given day, any of those top four - New Zealand, England, Jamaica and Australia - can beat each other. We had evidence [of that] against two of those top four sides in the last 12 months and we knew we had competed well with Australia in the Quad Series." 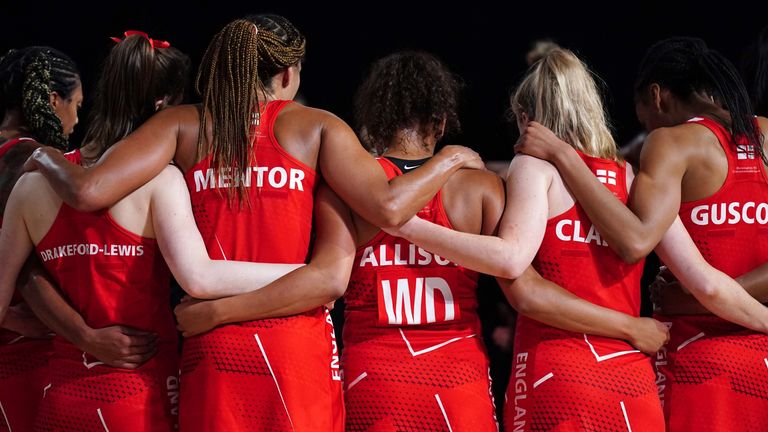 The review, as it should have, has already started. It will hopefully finetune where we need to make incremental changes but certainly what I’m not hearing is wholesale changes and that’s not what I’m seeing.

The conclusion of the Commonwealth Games saw two of England's most experienced defenders - Eboni Usoro-Brown and Stacey Francis-Bayman - retire from the sport.

Together, the duo made over 200 appearances for England, and with their respective decisions to step away others will need to step up. Fellow defender Geva Mentor played in her sixth Commonwealth Games in Birmingham.

"With any group, I always feel like succession planning is so important," Thirlby said. "There are always going to be some athletes that are at risk of retiring on their terms or it gets to a point where they're not necessarily consistently able to put out the performances required at the top level.

"With Stacey and Eboni retiring there will naturally be opportunities in that defensive end, but you've already seen so many others over the last few years. Fran Williams, outstanding, and she's been such a core member of the team. Everyone's been saying they want Funmi in the team.

"There's the likes of Amy Carter being introduced back into the programme after injury, she showed such good form in the infancy of my role when I started. And, there's a Futures programme, that's doubled in numbers. It's just a really exciting time."

Thirlby announced a 24-player full-time Vitality Roses squad back in May with Zara Everitt, Olivia Tchine and Fadoju moving from being Roses Futures athletes into the main programme.

Alice Harvey and Ellie Ratu were named as senior Vitality Roses for the first time in their careers and Rhea Dixon shifted into Roses Futures programme.

The enhanced 'Roses Futures' programme is designed with the specific objective of preparing a cohort of athletes to be 'Roses-ready' after the 2023 Netball World Cup.

When Thirlby took over as England head coach in 2019, she focused on exposing a greater number of players to the rigours of elite-level netball in order to enhance England's strength in depth.

England's next chance to take to an international court will be in October, when they host the Uganda She Cranes. The three-Test series will be shown live on Sky Sports.

The Roses will then head out to Australia and test themselves against the Australian Diamonds once again and Thirlby has specific objectives for these series.

"The fact that we have the Uganda series that also coincides with a group that will go overseas to play Australia, that in itself, tells you everything about how driven we are to expose more athletes to international netball," Thirlby noted.

"Both of those series will be hugely competitive. We're going to be able to expose up to 30 players to international netball early in the year as well, which is also important as well, because we then have time to capture the learnings from that. Then, we can become even more performance focused as we head towards January.

"Stick with us, is my call to arms to the fans because part of winning is learning how to win. You also have to do that with a broad group and one thing I am really proud of is the number of players we've exposed over the last few years.

"We got to that starting line [in Birmingham], absorbing some losses and still with a team that believed they can compete with the best. I don't think that would have been the case three years ago.

"I'm really proud of that and I'll continue to make sure I provide opportunity, where it's earned and where I believe the team need it, to give ourselves the best chance next year."