"I just want to let people know that it's okay… that's what I'd like people to think. It's okay to be bigger. As long as you're working hard, you do what you need to do and you're performing, it shouldn't matter what size you are."

They are the words that Britney Clarke, 21, would say to her teenage self, who was wondering whether or not to stay in the sport that she loves, netball.

The alternative was for Clarke to listen to the slights that she was told about her physique and conclude that she just wasn't the 'right fit' for netball.

Thankfully, Clarke didn't do that. Instead, she continued to seek higher honours and this season is playing her first as part of Saracens Mavericks' Vitality Netball Superleague squad.

"At the end of the day, it's a game of netball. I think that if I'm doing a job then it shouldn't matter," she says.

Clarke has chosen to speak to Sky Sports' Claire Thomas about her experiences in a bid to inspire others. She wants those that are younger than her (and perhaps even older than her) to feel okay in their own skin.

"I just want to let people know that it's okay… that's what I'd like people to think. It's okay to be bigger," she said.

"As long as you're working hard, you do what you need to do and you're performing, it shouldn't matter what size you are."

Clarke's elite career is still very much in its infancy, but she remembers the point when she realised that netball might be 'her thing'. It wasn't long ago, at U17s level, and that's when she started to clock the positive conversations about what she could potentially achieve in the sport.

However, alongside that positivity came negative experiences and comments that would sting.

"I'm quite a bubbly person, if someone comes to me directly with something, I don't really pay much attention to it. But, the turning point, when I really noticed that there was a difference between what people prefer and what I was bringing, was when I went to trials.

"You go for something like England trials, and I did, and you can see a clear difference… I was the only one that was bigger. You then think, well maybe I'm in the wrong place.

"It's difficult because you don't want to put words into people's mouths, but at the same time, there's no other way to take it. It was a situation where they were saying, you just need to do this; slim down and if you get fitter and more agile, then we can consider you."

In recent times, there have been too many reminders of how words can seriously hurt young women and men. The recent social media blackout was born out of the ambition to drive change online and in Clarke's case, these words didn't come to her via a device or through a screen.

"It would be very easy for me, in this environment, to be very critical of myself and take drastic lengths to be a different way and to fit the mould that netball has created in a way."

She was brave enough not to let the criticism that she received lead her down that path, but once she'd shown that level of courage, she had to muster further strength to tackle another area… kit.

Athletes from all sports speak about the importance of their kit and regularly discuss how it helps them in all manner of ways.

In the case of swimming or cycling, the aerodynamic aspects are vital. Serena Williams has used kit to safely return to court after childbirth and famously, Cathy Freeman worked to develop the most iconic running suit of all time, prior to her 400m race at the Sydney 2000 Olympics.

For Freeman, the suit was mapped around her physique and it contained bespoke materials to make every possible performance gain. Fast forward 21 years and Clarke hasn't ever been in a position where she has been able to take to a netball court in something nearing comfortable, let alone bespoke.

"At any franchise I've been at, I've never really had a dress that was fitting for me," she said.

"Dresses aren't made for girls that are bigger. So, at the start of this season when it happened again, it wasn't too much of a big deal because I'm used to it and have had it before. 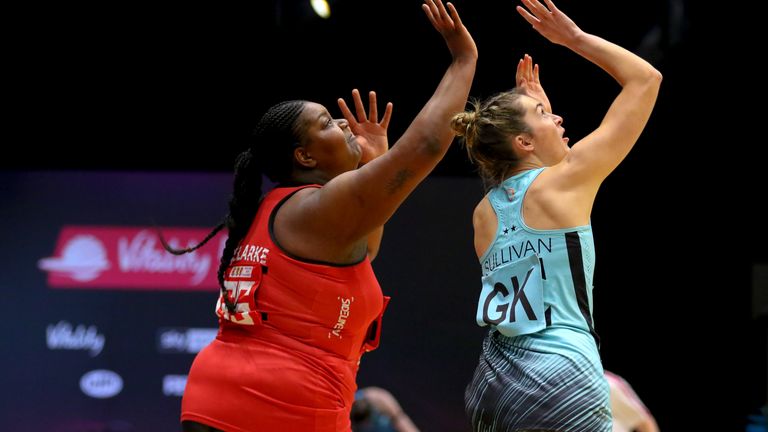 When you don’t have it [a dress that fits], you do feel like you’re not part of the team fully, even though you are on paper and you’re in the environment. Is it a respect thing, is it that I don’t actually belong?

"Then, I watched it [the matches] back and I hadn't realised how, not bad it looked, but how bad it looked if that makes sense. I was then consciously uncomfortable.

"I didn't want to make a big deal about it, and I didn't. I just said that it was fine, it's just a dress and I'm playing netball.

"I didn't realise that many people paid attention to it until after the first or second game," she continued. "Then, on Twitter, people were saying why can't we get Brit a dress?

"It's the 21st century here, they were talking about inclusivity in sport and I felt good about myself and that I'm the one who is raising that conversation."

Raising awareness and starting conversations is something that Clarke wants to do in speaking about her own experiences. For the 21-year-old, if just one person is inspired by reading this or seeing her play Superleague netball live on Sky Sports, then that's something incredibly positive.

"The girls who are like me, who want to play netball at a high level but are constantly told that they're not the right size, I'm glad to be the person and reason they say that they can do it, because I have.

"I want to say that it's okay - having bigger players in netball isn't going to harm the sport or harm where people want to take the sport to.

"Netball is on the rise and it's not going to stop that or slow it down at all, if anything it will help build the platform that netball's trying to reach.

"I just want to let people know that it's okay… that's what I'd like people to think. It's okay to be bigger, as long as you're working hard, you're doing what you need to do and you're performing, it shouldn't matter what size you are."

Sky Sports is your home of netball. The Vitality Netball Superleague continues on Monday evening with Round 18 and two back-to-back matches from 5pm, live on Sky Sports Mix and streamed on the Sky Sports YouTube channel.