Patrick Mahomes brushed off three interceptions - two in the first quarter - as the Chiefs came back from 10 down to win 33-27 against the Miami Dolphins at Hard Rock Stadium and move to 12-1.

Despite a turnover-ridden performance, he still managed to put up 393 yards and two touchdowns while leading the Chiefs to 30 straight points after their early deficit.

Tua Tagovailoa, meanwhile, led a fourth-quarter fightback for Miami but was ultimately stifled and couldn't keep up with quick-hitting Kansas City as the Dolphins fell to 8-5

The first Chiefs drive of the game saw them produce three-straight 10-plus-yard plays, but it came to an abrupt halt when Mahomes threw just his third interception all season.

Kansas City were looking to set up a screen for Travis Kelce, but Mahomes' pass was tipped up into the waiting arms of Byron Jones.

However, the Dolphins couldn't capitalise on the turnover as kicker Jason Sanders - who had converted 28 of 29 attempts on the season - missed wide right from 45 yards out.

Miami again secured themselves good field position when Jerome Baker sacked Mahomes for a massive 30-yard loss, leaving the Chiefs in a unique fourth-and-42 and punting from their own end zone. Tagovailoa found tight end Mike Gesicki for a 14-yard gain on third-and-11 to keep their responding drive alive, and four plays later, he went back to his tight end at the goal line, rolling left and throwing back across his body for a seven-yard score.

It didn't take long for Miami to get the ball back again, as Mahomes threw too high for running back Clyde Edwards-Helaire and Eric Rowe was waiting to secure another rare interception of last year's Super Bowl MVP, who won that award in this very stadium back in February.

The Dolphins settled for three points off the boot of Sanders, and a 10-0 lead early in the second quarter. Then Mahomes and the Chiefs turned it on, and they didn't look back. 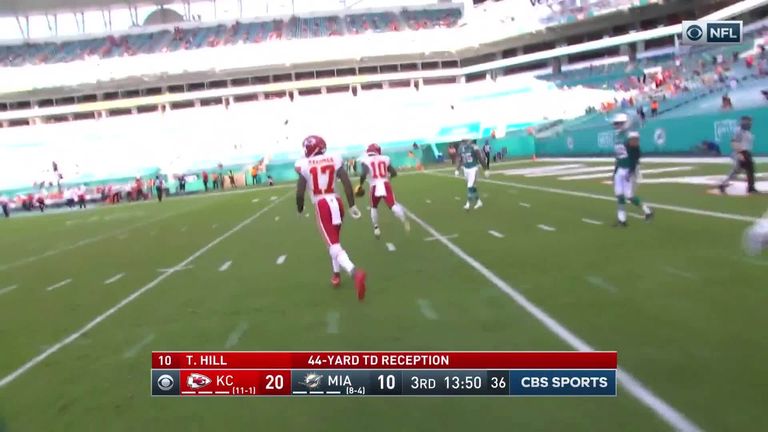 Kelce picked up 21 yards down the middle of the field after a perfect, in-stride throw before Tyreek Hill - with his first touch of the game - raced 32 yards on an end-around down the right-hand sideline for six.

A couple of drives later, Tagovailoa's deep throw towards Jakeem Grant was picked off by the opportunistic Tyrann Mathieu, and a methodical Mahomes took his team 59 yards down the field in nine plays, capping off the drive with a six-yard toss to Kelce. 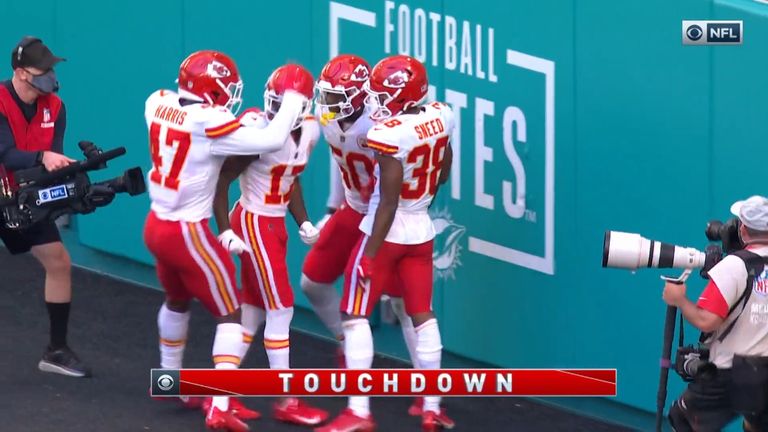 The Chiefs took a 14-10 lead into half-time, and it took just three plays for them to extend it after the break. Hill at full speed is almost impossible to defend, and he blazed past the defense for a 44-yard touchdown on a perfect pass from his QB.

Things got even worse for Miami just one minute later, as a three-and-out meant they had to punt to speedster Mecole Hardman, and he raced 67 yards down the left sideline to extend Kansas City's lead to 18 in a flash.

Soon after, Tagovailoa was sacked in his own end zone by Chris Jones, resulting in a safety and another two points for KC. 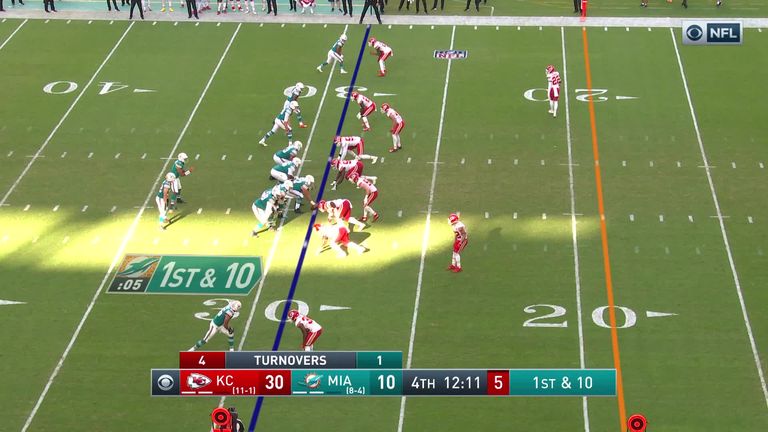 The Dolphins surged back in the fourth quarter, spurred on by a spectacular one-handed interception - Mahomes' third - by Xavien Howard, who now has a pick in five straight games.

That turnover resulted in a fantastic 29-yard touchdown catch in traffic by Gesicki to cap an 80-yard drive, and when they got the ball back again the Dolphins drove 67 yards in 14 plays, with a Tagovailoa 1-yard TD dive bringing them within six points.

However, it was too late, as the Chiefs all but sealed the win when Mahomes flipped to Hill on fourth down for a first down that allowed Harrison Butker to tack on three more points and make it a nine-point lead.

Sanders' late field goal gave the Dolphins an onside kick chance, but it was collected by the Chiefs.