From Rob Gronkowski's return from retirement to Antonio Brown's road to redemption and Leonard Fournette's bid to revive his career, the Tampa Bay Buccaneers' Super Bowl-winning campaign found itself dominated by comeback stories. 'People come down to Florida to retire, not these guys.' Super Bowl commentator Jim Nantz had banked that line in the back of his mind since March 20 2020, the day Tom Brady signed with the Tampa Bay Buccaneers.

The word some used was 'fun'. Fun in the Florida sun, fun playing for a fun guy like Bruce Arians, a fun reunion with his favourite companion Rob Gronkowski, fun match-ups with fellow quarterback icons in the NFC, care-free fun for a man that had won it all.

But this was never about winding down, never really about just having 'fun'.

Would Lionel Messi still be the same untouchable magician if he moved to the Premier League? Would Michael Schumacher still be as clutch and complete in a different car? Would prime Michael Jordan still be the same unstoppable force with another team? There's an obsession with questioning greatness. In the end, the conclusion to such questions is usually: yes, they probably would.

Would Brady still be the NFL's greatest of all time away from the genius of Bill Belichick and his ruthless New England Patriots dynasty? The NFL waited to find out, and did find out. Of course he would. How dare we suggest he had anything left to prove, how dare we be surprised by his immediate success in Tampa.

In a season that adopted an appearance like no other before it in light of Covid disruptions, and one that demanded we be enamoured by the rising quarterback marvels orchestrating a changing of the guard under center, there was something inevitable, something abiding about 43-year-old Brady collecting his seventh Super Bowl ring with victory over the Kansas City Chiefs and an artist in Patrick Mahomes with the talent to construct his own glistening legacy. Perhaps the only real difference being that Tampa sun tan he now sports.

Brady's defiance of the doubts that clouded him on his way out of New England was just one branch of a Bucs campaign built on so many critic-shunning, resurgence stories.

The sights and sounds of Super Bowl night are customary to what makes it so special, and few were as warming as Bruce Arians waving to his 95-year-old mum Kay in the stands at Raymond James Stadium after clinching his first Lombardi Trophy.

Arians is a fighter, a no-punches-pulled leader whose perseverance both on and off the field lives up to his 'No risk it no biscuit' ethos. He has beaten cancer on three occasions, he didn't get his first head coaching job in the NFL until the age of 60, and on Sunday claimed his first Super Bowl ring two years after coming out of retirement.

'Just a couple ex bartenders hanging out,' read the caption on Bucs general manager Jason Licht's post-game photo of he and Arians raising a toast. Licht had worked at The Brass Rail in the summer during his time at Nebraska-Wesleyan, while Arians had pulled pints in his Virginia Tech days. 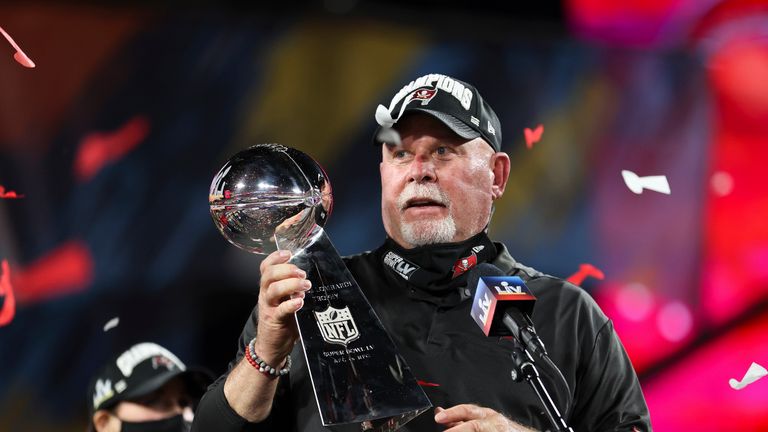 The X's and O's aside, he has been a focal champion for diversity across the league, evidenced on Sunday night when he was accompanied by four black coaches and two female coaches.

Their success is deafening, and further reminder to the NFL that it must do better.

While posing as long-awaited reward for Arians, it was the latest instalment of Antonio Brown's road to redemption.

Brown hauled in a one-yard touchdown catch in the second quarter to help the Bucs build a 21-6 lead, dropping to his knees and looking to the heavens with out-stretched arms in as emotional a state as seen from him since being offered a lifeline in the form of a one-year deal in October.

His arrival had followed an eight-week suspension for multiple violations of the NFL's personal conduct policy, two apparent retirement announcements, sexual assault allegations against him that resulted in his Patriots career lasting just one game and a six-month spell with the Oakland Raiders in the 2019 offseason which saw him leave without playing a single game following clashes with general manager Mike Mayock and a grievance over his helmet.

In April last year the former Pittsburgh Steelers star was charged with felony burglary of a vehicle, misdemeanor battery and misdemeanor criminal mischief, before being ordered to carry out 100 hours of community service as well as attend a 13-week anger management counselling programme and undergo a psychological evaluation.

On Sunday night, he became a Super Bowl winner for the first time. For that, he will forever be in debt to Brady, Arians and the Tampa brass for giving him another chance.

"Being out for a year without football made me appreciate it more," Brown said. "I'm just grateful to be at this point right here and to finally be a champion. I've been through a lot. I wouldn't change it for anything. Adversity, perseverance, fighting through, believing to get to this point and being able to finish I'm just super grateful. I couldn't write a better story."

Then there is that man Gronk, who around this time last year was hosting a Super Bowl beach party in Miami and evidently enjoying retirement having appeared on 'The Masked Singer' and won a WWE Championship since calling time on his playing career in the wake of winning his third ring at Super Bowl LIII.

He was battered and bruised, worn down mentally and had more than earned his right to step away, but when Brady came calling the opportunity was impossible to ignore. Without being the bulldozing mismatch that made him the greatest to ever play the position throughout his time in New England, he remained an unwavering outlet when his quarterback needed him to be and typically happy to make a nuisance of himself as an extra offensive lineman.

In something of a perfect finale, his two touchdown catches against the Chiefs made him and Brady the most prolific scoring combination in playoff history. "I wanted to take the year off, go through that journey, heal up, get my mind right and look at the options out there and see everything play out," he said.

"Then to come down here to Tampa, come out of retirement - I retired from being retired which is pretty cool - I saw the opportunity, I love Florida. It's an opportunity to be in great weather, T-shirt, shorts and sandals every day going to work. That's my style. What a journey it's been, what a story it's been. What a start it was to the journey and what a finish to the journey. It was the real deal."

Resiliency for Arians, redemption for AB, retirement from retirement for Gronk and now revival for Leonard Fournette, or 'Playoff Lenny' as he has come to be known as.

The Bucs running back defined 'worst to first' this season as he reinvented himself as a winner in Tampa after being cut by the Jacksonville Jaguars last August.

Fournette, who signed a one-year deal in September, buried the Chiefs with a 27-yard third-quarter touchdown run to round off an outstanding postseason campaign across which he had tallied 64 carries for 300 yards and three scores alongside 18 catches for 148 yards and another visit to the endzone. Injuries and a lack of harmony behind-the-scenes in Jacksonville had raised the question as to whether the NFL would ever see the best of 2017's fourth overall pick, whose reputation out of LSU had placed him alongside Minnesota Vikings talisman Dalvin Cook as the two leading backs in the nation.

The move north has sparked new life into his career.

"It was a tough year for me," Fournette said. "As a competitor, you want to be out there, you want to compete and help the team. In some games, I didn't play. But 'Playoff Lenny' came alive and I'm just blessed. I just thank God the Bucs gave me a second opportunity to play the game I love."

It goes on. Jason Pierre-Paul's second Super Bowl triumph continued a staggering journey twice threatened to be derailed when he was first left with seven functioning fingers after a fireworks accident in 2015, before suffering a neck fracture in a car accident in May 2019. A warrior befitting of a role in an Arians team. Fellow pass rusher Shaquil Barrett has established himself as one of the NFL's premier threats off the edge since the Von Miller and Bradley Chubb-led Denver Broncos allowed him to walk away at the end of 2018. Having managed a season-high of just 5.5 sacks during his time in Denver, the 2014 undrafted free agent went on to lead the league with 19.5 upon signing with the Bucs in 2019 following by eight in the 2020 regular season and three in the playoffs. Talent always shines through eventually.

Elsewhere Vita Vea represents one of the more short-term inspirations, winning the Super Bowl just four months after breaking his leg against the Chicago Bears in Week Five.

On the sideline defensive coordinator Todd Bowles delivered a masterclass against one of the NFL's most explosive offenses to thrust himself back into head-coaching contention after three losings seasons out of four with the New York Jets from 2015-2018. And in winning alongside Brady offensive coordinator Byron Leftwich, who faced heavy scrutiny over his work with the Bucs offense all year, raised his stock as a head coach candidate having been fired by the Arizona Cardinals in 2018.

From comebacks and cast-offs to world champions.