Heather Fisher's battle with alopecia has seen her kicked out of female toilets and face accusations of taking drugs; ahead of International Women's Day, the England rugby sevens star spoke about her constant struggle to challenge gender stereotypes 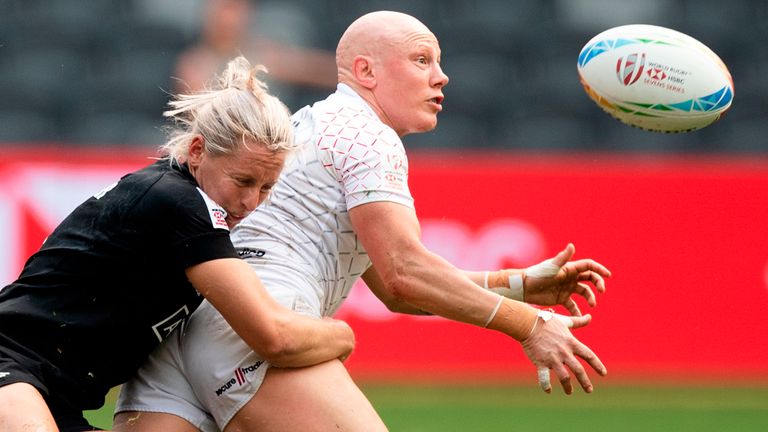 England rugby sevens star Heather Fisher speaks to Sky Sports News about the 'insecurity' of living with alopecia, including being kicked out of female toilets and facing accusations of taking drugs

England rugby sevens star Heather Fisher has opened up about her battle with alopecia as she looks to represent Team GB at a second Olympics later this year.

On the pitch, 36-year-old Fisher has played for Team GB at Rio 2016, for England at World Cups, and won a bronze medal at the 2018 Commonwealth Games.

But off the pitch, Fisher has had to deal with situations related to her hair loss, being kicked out of female toilets and facing accusations of taking drugs.

"I'm just a girl going about her dream of getting to Tokyo," said Fisher, who is on the first episode of the official Birmingham 2022 Commonwealth Games podcast - 22 voices. "Along the way, I lost some hair over stress, then before you know it, you're judged for being a male because you've got no hair and you've got muscles.

"I've always had a dream of being an athlete. I struggled with anorexia as a young girl, that was a lot about perception and how you should look, but then struggling with my hair loss breeds a new build of insecurity and inner-confidence issues, because then I'm always judged for being a bloke, accused of taking drugs or being a boy.

"That's where that came from about being kicked out of toilets, police waiting for me outside toilets. That's just the norm. It's not great."

Fisher also revealed she has previously had to lift her top up to prove her gender.

"When I get questioned about being a bloke, a lot of it depends on the day on how confident I feel whether I challenge it," she added.

"Sometimes I wouldn't want to open my mouth, because if I did they'd know I'm female and then I would have to explain it.

"There are times when I've been in changing rooms where I would almost rush to get naked, so they can almost see that I am female, which is crazy. I feel embarrassed saying it, I've even had to lift my top up when police are waiting outside in different countries just to prove I'm female. I don't feel like I've had a lot of choice. I'll very rarely stop at motorway services because I know what's going to come.

"It gives you problems I don't think I should be having. I'm just a female who's lost her hair and trains for their country. I've got muscles. When I say it like that, I can laugh it off, but there are times where comments will get said and I'm reminded of it all the time. It makes me feel really insecure.

"I feel like I've constantly had to wear a clown outfit, to be someone else, to explain who I am, to talk so someone can hear who I am. The effect is, my confidence, the only time I don't feel judged is when I'm on the pitch. Away from it, I don't feel like I belong almost in society because of the look that I have, that I can't help."

Monday marks International Women's Day, and Fisher said the reality is that women must keep challenging inequality until there is a level playing field.

She said: "We shouldn't have to have one day a year, we should be equal. It is an opportunity to put females on the map, to put other females out there who have dreams and are following them. It shouldn't be something that everybody is working towards, but it is important because it's an opportunity to hear more voices.

"Unless we choose to challenge it, it's not going to change. A lot of females I know will sit back and say they won't challenge it, but we have to. Not to be above, there's no above, it's just equal."

On top of training, Fisher has taken on a mentoring role, where she is keen to stress the power of individuality.

"Yes, females out there are strong, but we're still not seen as level with guys" she said. "I do coach individuals to be yourself. You have to be understanding, but I won't change to mould to a coaching style.

"I am who I am, I play who I play. A female knowing that can be intimidating to some people, but that's what it is. I feel like it should be coached into us, not out of us."

To listen to the full episode of 22 Voices featuring Heather Fisher and Sarah Davies, search for 22 Voices wherever you listen to your podcasts, or head to www.birmingham2022.com/22voices