Jake Wightman's dad and coach will be in the Olympic Stadium due to his role as a stadium announcer; the 27-year-old British middle-distance runner's rivalry with Josh Kerr is pushing him on, as well as aiming to impress British greats Sebastian Coe, Steve Ovett and Steve Cram 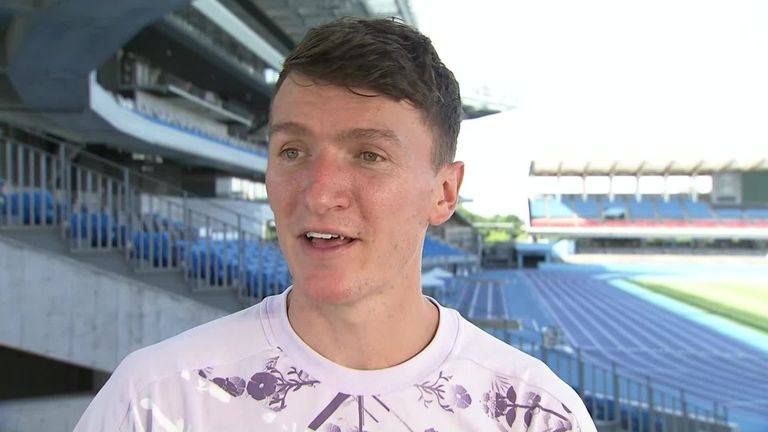 When Team GB athlete Jake Wightman takes to the track for the 1500m heats, the 27-year-old could hear a very familiar voice introducing him to the empty stands, that of his dad Geoff.

Geoff Wightman is not only a former athlete himself, who competed at the 1990 Commonwealth Games, but he's also Jake's coach.

Athletics and major events are at the heart of the Wightman family; Jake's mother ran in the marathon in Seoul 1988 and his auntie competed in the 10,000m at the same Olympic Games.

As a British 1500m runner, and one that comes from such an esteemed background, it's no wonder that Jake Wightman describes himself as "a bit of a nerd" when it comes to those who have paved the way in British male middle-distance running.

Leading into these Games, Wightman and his fellow Team GB team-mate Josh Kerr, have been locked in an intense domestic rivalry.

At June's Muller British Championships, Kerr just had the edge but only by a tiny margin - 3:40.72 to 3:40.77. Naturally, given the distance and the two being male athletes, thoughts flip to the days of Steve Ovett and Sebastian Coe, alongside the achievements of Steve Cram.

"You look at Coe and Ovett, we're [Josh and I] quite a long way from that, but when you've got someone competing as well as he is, you've got to benchmark yourself against that and get even better to be able to beat him.

"We're a long way from them medal wise too and also, they were running world records when they were doing that. I hope that we can get to that point and this year, it's a pretty good opportunity to get somewhere along that road."

Wightman has in fact already run a faster 1500m than the trio British greats he admires so and speaks about.

His 3:29.47 personal best has only been surpassed by one other British man - Sir Mo Farah. Wightman achieved that time at the Monaco Diamond League in 2020, and said that it gave him the confidence to focus on Tokyo and challenge for medals. If you can be mentioned in the same breath as those guys [Steve Ovett, Sebastian Coe and Steve Cram], then hopefully that means we're doing something right.

"If there's anyone that I'd love to be compared to then it's Seb [Coe]. The way that he ran and the circumstances that I'm in, where I'm close with my Dad and went to the same university, I feel like that's who I can relate to best.

"I saw him last year just before lockdown and he gave me some good advice then. Probably one of the nicest things that happened was when I won the Diamond League in 2017, I got a letter through the post from him.

"I'd not had much contact with him before then. For him to be impressed by what I was doing, and enough to send me a letter, that was special.

"It means a lot. I don't think that those guys realise that if they reach out to us, how much of big a deal it is. They're the guys that we're aspiring to be like; they're massive icons in our sport".

Sky Sports News reporter Ben Ransom looks at the challenges Team GB will face at Tokyo 2020, predicted to be the hottest Games ever.

For Wightman, the bid to emulate the type of Olympic success that Coe, Ovett and Cram had, starts on Tuesday, August 3 and alongside his fellow competitors, he will be battling with the conditions.

July and August are the hottest months of the year in Tokyo, with temperatures in the mid-30s and humidity levels of around 80 per cent.

"It's a lot hotter than I thought that it was going to be," Wightman noted.

"I did a little bit in the heat chamber to try and get ready, but I don't think that you can simulate the direct sunlight. The sunlight is probably the bit that adds that little bit extra to it.

"Competing won't be too bad, it will be warming up and just trying to stay as cool as possible during that period. I feel pretty sorry for the marathon runners and the race walkers, because it's going to be pretty brutal in these conditions."

For Wightman, his focus remains on the 1500m and a field of athletes that now includes Timothy Cheruiyot, the 2019 World Champion.

Cheruiyot was originally left out of Kenya's Olympic team after he finished outside of the top-three at their trials. However, Cheruiyot - who holds a 3:28:48 personal best - has now taken the place of 18-year-old Kamar Etyang.

Now officially in the Team camp. It's an honour to represent 🇰🇪 at the @Tokyo2020 Olympic Games#Tokyo2020 🇯🇵 #TrackAndField pic.twitter.com/8K9svSYRSN

Etyang was removed from the Kenyan team for not having the minimum number of out of competition drugs tests. Wightman, for one, is pleased to see that Cheruiyot will be on the start line.

"If he hadn't been in it, it would have been disappointing. You want to win it against the best in the world," the Team GB athlete said.

"It's going to be weird because there's no crowd," he added about the atmosphere for the events."But, I think that makes the stadium announcer's role more important.

"For a lot of the guys, we're so used to having him [Dad/Geoff] because he's done previous Olympics and World Championships, so his voice is always familiar when we're inside the stadium.

"The dream would be to win an Olympic gold with him calling the race in, that would be special for us. So far, I haven't been able to make him lose composure when he's been on the microphone, but I hope that would do it."