Krystsina Tsimanouskaya: IOC says two Belarus coaches have been removed from the athletes village in Tokyo 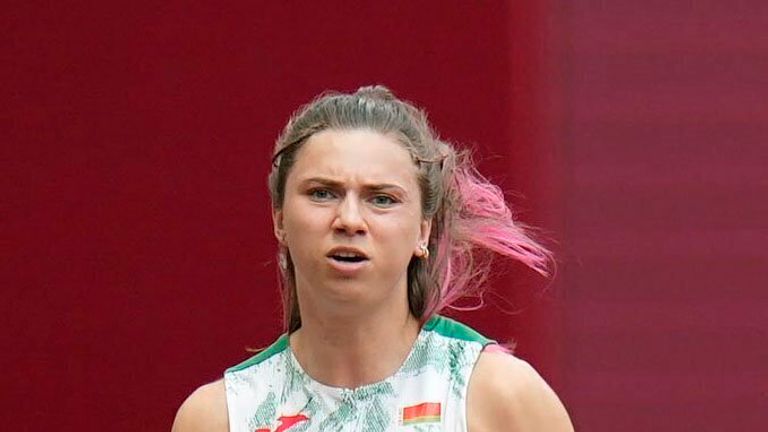 Two Belarus coaches who cut short sprinter Krystsina Tsimanouskaya's Tokyo Games have had their accreditation revoked and have been removed from the athletes village.

The International Olympic Committee said athletics head coach Yuri Moisevich and team official Artur Shumak were asked to leave the Olympic village - days after they ordered Tsimanouskaya to pack her bags and and go to the airport.

In an interview with Reuters in Warsaw on Thursday, Tsimanouskaya said the two officials had told her the order to send her home came from "high up" in Belarus.

The IOC said on Friday: "In the interest of the wellbeing of the athletes of the National Olympic Committee of Belarus who are still in Tokyo, and as a provisional measure, the IOC cancelled and removed last night the accreditations of the two coaches.

"They will be offered an opportunity to be heard."

On Sunday, Tsimanouskaya refused to board a flight home and sought protection from Japanese police, before seeking asylum in Poland.

The 24-year-old athlete's case threatens to further isolate Belarusian President Alexander Lukashenko, who is under Western sanctions after a crackdown on opponents since last year, and whose son heads the national Olympic Committee.

"We are not the ones who made the decision, we are only executing it," Tsimanouskaya said the two officials told her. "You have 40 minutes. You have to pack your things and go to the airport."

Tsimanouskaya said she decided to defect as she was being driven to a Tokyo airport because her grandmother told her that it was not safe to return home to Belarus.

She said she would testify in a disciplinary commission on Friday and urged the IOC to defend her and other athletes.

"I hope that the International Olympic Committee will make the right decision and will defend the athletes and defend me," she said.

The Belarus Olympic team in Tokyo did not comment on Friday.

The Belarus National Olympic Committee (NOC) and the coaches have said they withdrew Tsimanouskaya from the Games on doctors' advice about her emotional and psychological state.