Percival's long-range try was the highlight of the reigning champions' win away to Warrington on Monday night; "It's a really good example of his class and an example for young players as well," said Woolf

Kristian Woolf praised the skills of Mark Percival after the centre's thrilling long-range try helped St Helens to a 24-14 Super League win over Warrington Wolves at the Halliwell Jones Stadium.

Saints were trailing 14-10 in a pulsating contest when Joe Batchelor stole the ball from Jake Mamo and handed it on to Percival, who raced 70 metres for a sensational score early in the second half.

It put the back-to-back Super League champions back on course for victory and all but ended Warrington's hopes of a top-two finish.

St Helens kept the pressure on Catalans Dragons at the top of the Super League table with a thrilling 24-14 win over Warrington.

"Joe Batchelor did well to get the ball back and it was great support play and instinct from Mark Percival to put himself there and get the ball," Woolf said.

"We always try and teach kids about changing hands when you see defenders coming and Perc was able to do that twice against two different defenders. It's a really good example of his class and an example for young players as well."

The win for the champions means it is set to be a straight head-to-head between the Saints and current Super League leaders Catalans Dragons for the league leaders' shield with the top two clashing at Newcastle's St James' Park next weekend in the Magic Weekend. 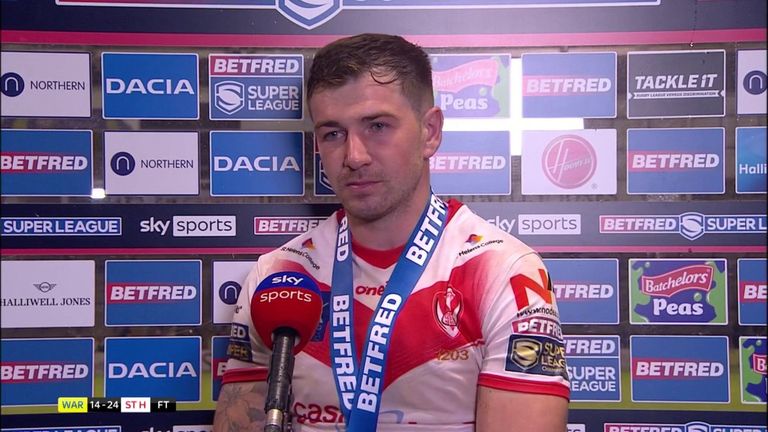 "It was a really good game of footy and both teams had their moments," Woolf said. "We started really well and just made a couple of uncharacteristic errors which gave them some field position and opportunities.

"They have some class players and have some strike so, if you give them those opportunities, they can hurt you and that's what they did. "But I thought we controlled field position in the second half and took our opportunities and defended exceptionally which is where it was won."

Warrington coach Steve Price was proud of his side's efforts despite the defeat all but ruling them out of the running for a top-two spot.

The Wolves led 14-10 at half-time through tries by Ben Currie and George Williams and three goals from Stefan Ratchford, but failed to add to their tally in the second half. 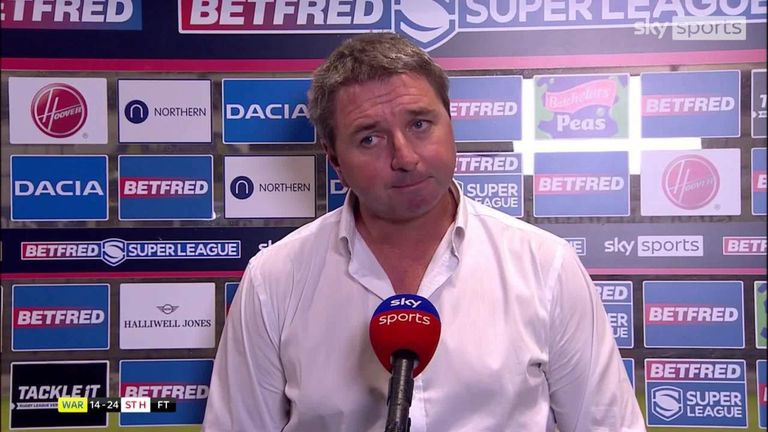 "We showed a lot of guts to stay in the fight and it was a tough game and I'm proud of the boys' efforts," Price said. "They started really well in both halves and I thought we did really well to get back in the game.

"But the penalties we conceded at the start of the second half were disappointing and we will look at some things we could have done better.

"But that sort of high-intensity game was what we needed as we haven't had one like that for a long time and it should put us in good shape going forward.

"We had to absorb too much pressure in that second half and that's where we can get better. For us to do something special in this competition, we need to be better - it's as simple as that."