Super League: Sunday's talking points and team news as Round 19 comes to a close

We look at what is being said and bring team news as Round 19 of the Betfred Super League season closes with two matches on Sunday...

Brodie Croft has revealed how his move to Salford has helped him rediscover his love of rugby league ahead of the visit of Catalans Dragons on Sunday.

The 24-year-old half-back moved to the Red Devils after a tough two seasons with Brisbane Broncos, where he admitted the club's struggles and the criticism he faced led to him losing his enjoyment.

Although he never let his work ethic drop, Croft feels revitalised since moving to Super League and a string of eye-catching displays for Salford have come on the back of him loving life under head coach Paul Rowley.

"You play your best when you've got good vibes and a good feeling. You go training not just because it's work, but because you enjoy it and you want to better yourself, and I wasn't feeling that.

"One thing I wanted to do when I came over here was get back to enjoying my football and my training, and that's something with this group at Salford I feel at the club. 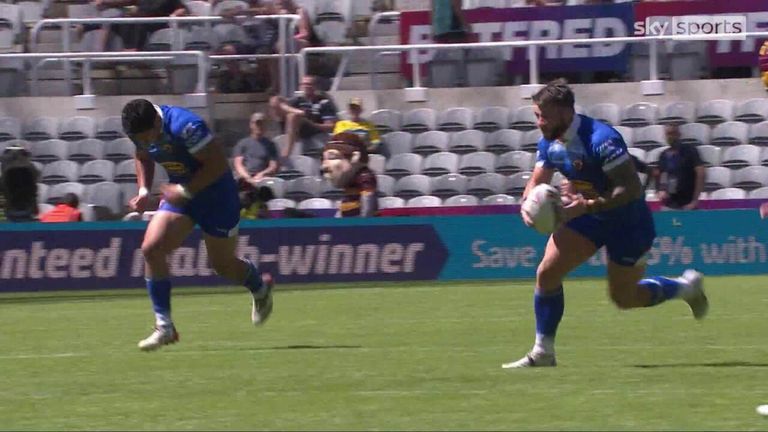 Croft scored an impressive solo effort for the Red Devils at Magic Weekend, although they were beaten 30-18 by Huddersfield Giants to dent their outside hopes of making the play-offs.

They hosts a Dragons team aiming to bounce back from a 36-10 defeat to Warrington Wolves at St James' Park and a win would lift the French side back above Huddersfield into third.

Catalans head coach Steve McNamara is still without several key men, including captain Benjamin Garcia after his horror ear injury in the defeat to the Wolves, but welcomes Dean Whare, Julian Bousquet and Sam Kasiano back into the squad to face the Red Devils. Quiet man Jorge Taufua has already made a big impression at Wakefield as the three-quarter prepares for a likely debut away to Hull KR on Sunday.

The former Manly Sea Eagles back linked up with his new team-mates earlier this week and has gone straight into the 21-man squad for the trip to Sewell Group Craven Park. Trinity are aiming to rebound from the 38-26 defeat to bottom side Toulouse Olympique at Magic Weekend and head coach Willie Poching is confident Taufua can make an impact if he makes his debut.

"He's a man of very few words, but his actions have spoken words for how he has gone about his business and fitted in with the team," Poching said.

"He's stepped back, he's watched, he's learnt, he's asked questions and you can sense the excitement talking to him about an opportunity if he gets to play this week."

Hull KR are also seeking a return to winning ways, having now won just one of their last nine following a controversial 34-28 defeat to Hull FC in the derby in Newcastle. Frankie Halton and Albert Vete are both out after picking up injuries in that game, but loan signing Sam Royle comes into Danny McGuire's 21-man squad along with the returning duo of George King and Ryan Hall.

"Everything isn't rosy, and that's why I said when I took over," interim head coach McGuire said in his pre-match press conference. "I've been on that again this week, and the lads get that.

"We all understand where we are on the table, and we are in a situation where we need to win a rugby match."