Watch three more games from Round 9 of the NRL live on Sky Sports Arena on Saturday: Cronulla Sharks vs Penrith Panthers (6am), Brisbane Broncos vs Canterbury Bulldogs (8.30am), Canberra Raiders vs Melbourne Storm (10.35am).

Beau Fermor was the hero for Gold Coast with a converted try six minutes from time which secured their first home win since Round 6 last year.

The Titans had to do it the hard way after conceding two tries in the first seven minutes but fought back to notch up their third win of the season.

The Warriors could hardly have asked for a better start at Cbus Super Stadium, with Roger Tuivasa-Sheck getting the ball rolling with his 50th NRL try just two minutes into the match.

That was followed by Ken Maumalo racing over five minutes later, while two conversions from Chanel Harris-Tavita made the lead 12-0.

Anthony Don got the Titans back into the match in the 19th minute, stepping his way through the defence to finish a good attacking move from Justin Holbrook's men followed by Ashley Taylor converting.

Then, seven minutes into the second half, Sam Stone was on hand to finish after a superb piece of skills from Tyrone Peachey to keep the ball in play when it looked to be going dead.

That try went unconverted, but the home side kept pushing and got their reward in the 74th minute when 21-year-old Fermor went over for his first NRL try and Jamal Fogarty kicked the conversion to put the seal on a welcome victory.

Dane Gagai's third career hat-trick set South Sydney on course for their second win in a row, but they had to hold off a determined fightback from the Tigers in the second half. 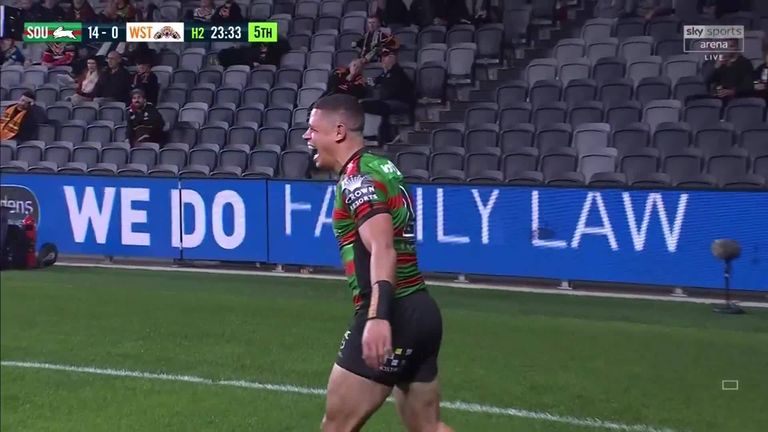 Wayne Bennett's men went ahead through a penalty from Adam Reynolds after seven minutes, but apart from that, there was little to choose between the sides for much of the first half.

That was until the 32nd minute when Souths capitalised on some errors by Wests, with Cody Walker finding Gagai wide on the right to score an unconverted try.

Gagai got his second on the stroke of half time after Latrell Mitchell found him on the wing with a cut-out pass, putting the Rabbitohs 10-0 up at the break. 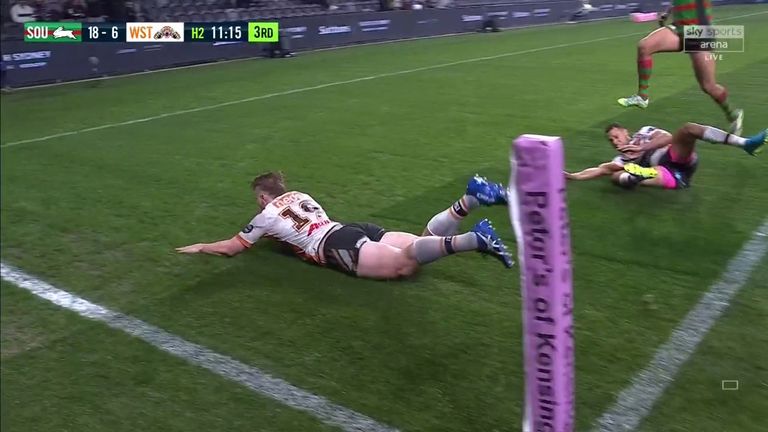 James Roberts finished off a lightning attack for Souths following a scrum with another try on the right six minutes into the second half, with Gagai grabbing his third in the 56th minute.

The Tigers were not done yet though, and Josh Aloai crashing over followed by a debut try for Reece Hoffman, plus one conversion from Moses Mbye, gave them hope. However, Souths held out for the win.