Black Lives Matter: Martin Offiah explains how he fought back against racist abuse

"Being in those intense environments, playing at away grounds and people abusing me, I just thought 'I'm going to score today' and that's the way I fought back."

Rugby league great Martin Offiah has revealed how he fought back against racists by using the abuse he received while playing as motivation.

Appearing as a pundit during Sky Sports' coverage of Super League's return to action on Sunday, the former Wigan and Great Britain star explained how it is still difficult for him to reflect on the abuse he was subjected to at times.

However, Offiah says he was always determined to rise above it and didn't let it "crush" him.

"The abuse I experienced while playing primarily rugby league, it wasn't good and it's tough to even go back and think about the level of abuse I had, but it's what fired me," Offiah told Sky Sports.

"I had to think to myself and think positively about it. It's what made me what I am today, going through that. It's not what happens to you in your life, I believe it's how you react to the things that happen to you.

"Being in those intense environments, playing at away grounds and people abusing me, I just thought 'I'm going to score today' and that's the way I fought back. 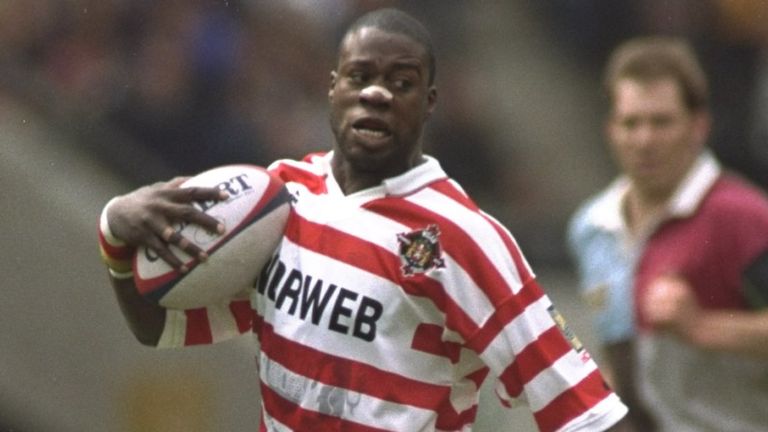 It's tough to even go back and think about the level of abuse I had, but it's what fired me.

Players and officials at Emerald Headingley took a knee in solidarity with the Black Lives Matter movement prior to the Super League matches on Sunday between St Helens and Catalans Dragons, and Leeds Rhinos and Huddersfield Giants.

Catalans centre Israel Folau opted not to join in with the gesture, with head coach Steve McNamara defending his decision.

Sky Sports rugby league expert Barrie McDermott acknowledged Folau has the right to express his beliefs, but feels he made the wrong decision not to take a knee.

"I thought it was a chance for us all, as a game, to take a knee and show our solidarity with our mates," McDermott told Sky Sports News.

"I'm disappointed, I reckon most people would be disappointed. Everybody is entitled to their opinion; I personally think he got it wrong."

Offiah is in no doubt rugby league has plenty to be proud of when it comes to celebrating diversity, although he added the sport must not shy away from confronting the issues which have arisen.

And the 53-year-old called on more people to throw their support behind the Black Lives Matter movement.

"It's not just black people," Offiah said. "Black Lives Matter is a symbol and it's a feeling, it's not political.

"It shouldn't be taken as divisive or people trying to advance a certain agenda, it's just about people living great lives and living the lives we all want to live for our own children and family, and spreading that positivity - and I can't see how you cannot get on board with that feeling.

"It's great what the Rugby Football League are doing, I commend their history and celebrate the good things they have done.