A record crowd for a women's match in the UK were at Headingley on Sunday to watch St Helens seal the treble with victory over Leeds Rhinos in the Grand Final. "We're only going to get bigger, better, faster and quicker," player of the match Chantelle Crowl said

It is not unusual for St Helens to be selling a significant amount of replica shirts with the name 'Cunningham' printed on the back of them.

But a sign of how times are changing is that these days it is not so much in honour of Keiron, the iconic hooker regarded as one of the club's greats who has a statue outside Totally Wicked Stadium, but more because of the impact his namesake and women's team star Jodie is having.

This year's Woman of Steel has become one of the most recognisable players in the Women's Super League and on Sunday skippered Saints to treble glory as they defeated Leeds Rhinos 28-0 in the Grand Final.

Cunningham is not the only member of her team, or indeed the competition as a whole, who is becoming a household name though and St Helens head coach Derek Hardman has noticed how the profile of his team has risen with the increase in attention being paid to women's rugby league.

"Only the last few weeks, we've shirt sales at the club with people like 'Cunningham' with the back - It's a great name at our club and now Jodie is going to take that on," Hardman said.

"We've had girls messaging on social media asking for autographs, girls have been asked for their boots today and there's this great razzmatazz with people now and that's great for the game.

"We've written our own history this year and I don't think we've been in the shadow of the men. As one club, we're very happy and proud of what we do - and that starts from the top down." 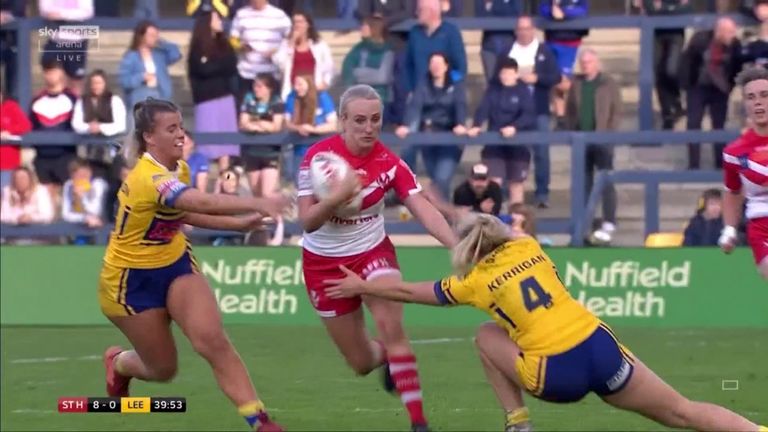 It was something of a mixed day for Cunningham on Sunday, who was sin-binned for the first time in her career after preventing the Rhinos taking a quick tap restart early in the first half but returned to the field to score a sensational try which put her side 10-0 up at half-time.

Having already won the Challenge Cup and League Leaders' Shield, the priority was on making sure Saints secured a clean sweep of honours for the year. Yet the England international, who has an eye on next year's postponed Rugby League World Cup too, was pleased both teams were able to showcase the competition in a positive light.

"The win was the main thing, but we wanted to put on a showcase for women's rugby league," Cunningham said. "We worked so hard, and we know we've got top-quality rugby in us, and live we had so much great support but back home we hope we made everyone proud.

"If that game is anything to go by, there is going to be so much progress made at the international level. 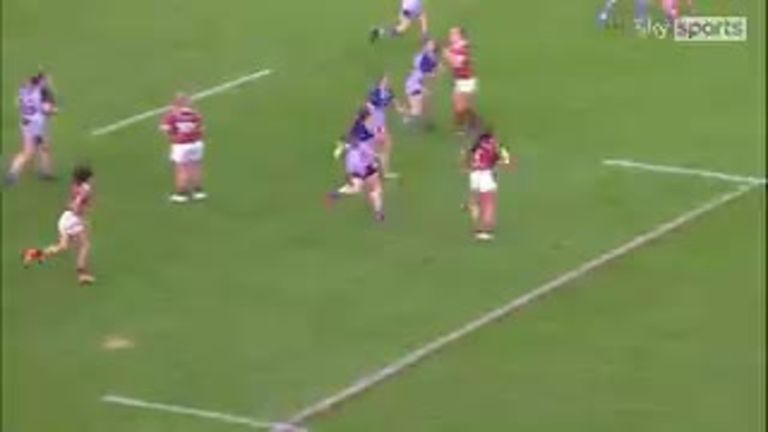 "The time we had off with Covid has been a blessing; as an England performance unit, we had loads of time on the field, loads of time in the gym and I think you can see that in the athleticism of the girls in the squad now.

"We're looking so strong and it's exciting for next year and for the World Cup."

Not only was the Grand Final once again broadcast live on Sky Sports, but it attracted a record crowd for a women's game in the UK of 4,235 to Headingley on a day which also featured Huddersfield Giants edging out Featherstone Rovers 24-22 to lift the Women's Super League Shield in the curtain-raiser.

Chantelle Crowl, who was named player of the match for her sterling work in the front row for Saints, revelled in the atmosphere created by the supporters of both teams - even if she did struggle to hear the tackle count from referee Aaron Moore at times.

"It was unreal," Crowl said. "It was the first time I'd been on a pitch and I can't hear the ref.

"The chants and the people behind us and even the Leeds supporters, everyone there was amazing, and it gave us that boost to go on and put in a performance like that.

"We're only going to get bigger, better, faster and quicker, so be prepared for next year."

Lois Forsell, the Leeds head coach who played the inaugural Women's Super League season with Bradford Bulls in 2017 before switching to the Rhinos, has seen just how far the competition has come from those early days.

The little girl on the left never imagined that she'd have the opportunities to be stood on the right. Forever grateful 🙏 #DreamsComeTrue pic.twitter.com/WHDAzLNB32

Even with the season being cancelled last year due to the Covid-19 pandemic, the competition has made rapid progress since its inception and the former England international hooker sees Sunday as another step along the road to even more growth.

"Just for the women's game, it's absolutely massive and to have that many people here watching is good for the game," Forsell said.

"Having the game shown live, hopefully for the people who tuned in to see what it was all will have changed their perception and they'll want to be involved in rugby league a lot more."