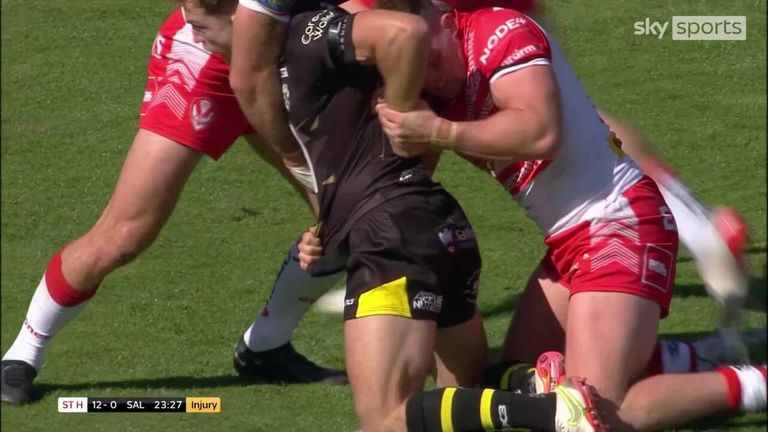 St Helens' Morgan Knowles will play in Saturday's Grand Final after the club won a second appeal against the two-match suspension he received after their semi-final.

Knowles was sin-binned during Saints' 19-12 semi-final win over Salford for twisting the arm of Chris Atkin, and his conduct was deemed to be Grade B Dangerous Contact with an opponent.

On Tuesday, the independent tribunal upheld the Match Review Panel's decision and also imposed a £500 fine, citing that although Knowles did not move Atkin's arm "beyond the normal range of movement", he did cause an unacceptable risk of injury. It was these two points St Helens then used to launch their second appeal.

St Helens, led by their CEO Mike Rush, then argued that if it is accepted that Atkin's arm did not go beyond the "normal range of movement" and Knowles was committing a professional foul then he could not have posed an unacceptable risk of injury, calling the statements incompatible with one another - an argument which was upheld and agreed with by the Appeal Panel.

The outcome is a natural boost for the reigning champions as they seek an unprecedented fourth successive Grand Final victory.

It will also be welcomed by England coach Shaun Wane, who looks certain to include the former Welsh international in his 24-man squad for the World Cup. 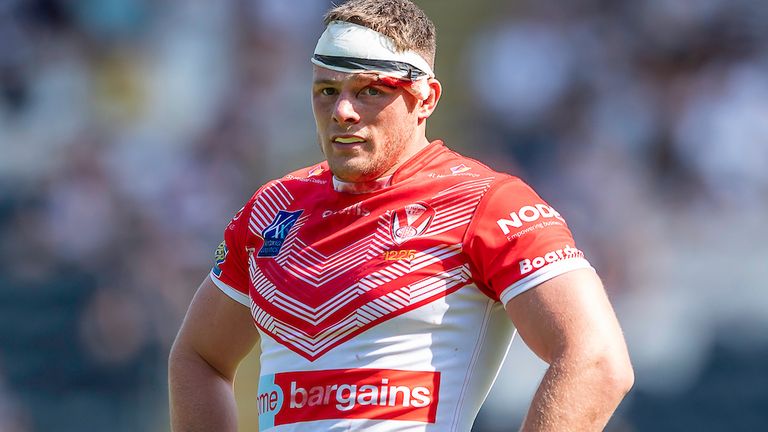 Reaction to the overturning of the ban has been intense, with many fans calling into question the RFL's disciplinary process after a season that has seen heavy bans and "frivolous" appeals being penalised.

For Sky Sports rugby league pundit Barrie McDermott, it has caused such upset with fans because of a "lack of consistency" with the disciplinary process across the season as a whole.

"Morgan Knowles is a magnificent player and in many ways, I am pleased he is going to be part of the big dance, the Grand Final at Old Trafford," McDermott told Sky Sports. "But what everybody screams out for is the consistency, where is the one rule for one and one rule for another.

"So, it is a bit of a shame really because we have got a magnificent game in store with St Helens who are looking to do the Grand Final victory for a record fourth time and Leeds Rhinos who have come from absolutely nowhere.

"So, a lot of controversy this week and unfortunately it is everybody around the game who is taking the headlines away from those 34 players who will take part in the game on Saturday evening.

"I think the disciplinary needs to be completely scrapped, overhauled, we wipe the slate clean and we find something everyone is happy with because I don't think anyone outside of St Helens will be happy with this."

Woolf: Knowles availability 'a big boost' | Smith: I thought it could go either way

St Helens head coach Kristian Woolf felt the decision to overturn the original suspension handed down to Knowles vindicated his initial view of the incident.

Woolf was also delighted the England international will now be available to play in the Grand Final after a year which saw him once again named in the competition's Dream Team.

"When Morgan was first charged, I commented afterwards I would be surprised if it was a suspension," Woolf said at Thursday's media day ahead of the Grand Final.

"Out of the first appeal, there were a couple of points which were quite contradictory and that's what we based our second appeal on.

Leeds boss Rohan Smith would not be drawn on whether he agreed with the decision to allow Knowles to play at Old Trafford.

"I didn't really have a major reaction," Smith said. "I thought there was every chance it could go either way. It's probably good for the game and good for the World Cup."

"I've seen the tackle, that's it. Each hearing is its own individual thing, as was found from Tuesday to Wednesday where a different group of people could find a different answer to the same tackle.

Why was Knowles' ban overturned?

Knowles was initially handed a two-match penalty notice by the Match Review Panel on Monday following the weekend's semi-final for a Grade B dangerous contact charge.

The loose forward was deemed to have used "any part of their body forcefully to twist, bend or otherwise apply pressure to the limb or limbs of an opposing player in a way that involves an unacceptable risk of injury to that player" in his tackle on Salford's Atkin.

That initial verdict was contested by St Helens at an independent tribunal on Tuesday, which upheld the Match Review Panel's decision.

St Helens then appealed that decision on the basis that they believed the tribunal "came to a decision to which no reasonable body could have come".

This is one of four areas under the RFL's Operational Rules which allow for appeals against decisions by tribunals covering on-field misconduct.

The basis for this, according to the Appeal Panel minutes published by the RFL on Thursday, was: "That as the original tribunal had agreed that the action of Mr Knowles was a professional foul in an attempt to slow the play the ball down; they could not say that either the player's shoulder or indeed the player's wrist at any point was in an unnatural position, although it appeared that the attacking player's shoulder was put to the end of the range of its normal motion.

"Whilst there could be a risk…due to the lack of movement beyond its natural range, there was not an 'unacceptable risk' which was an element of the charge and all elements of that charge had to be met.

"Although the original tribunal believed that Mr Knowles' actions caused the attacking player to twist his trunk in the same direction as Mr Knowles was applying pressure, so as to avoid further injury to himself and was therefore in a vulnerable position such that any further force from Mr Knowles or indeed from any other tackler could easily have caused injury, their opinion that there was an unacceptable risk taken by the player was wrong, as they had already agreed that the arm was never in an unnatural position Mr Knowles' actions were, therefore, not reckless."

There was no fresh evidence heard on Wednesday as this was a review of Tuesday's hearing rather than a new one, and following a period of deliberation the panel agreed: "The original tribunal's ruling that there was 'unacceptable risk' could not be the case if the player's arm never extended beyond the natural range of movement and therefore deemed the appeal to be successful."