Round 4 of the 2021 Super League season kicks off with Wigan Warriors against Castleford Tigers (6pm) followed by Huddersfield Giants against St Helens (7.45pm); watch Huddersfield vs St Helens live on Sky Sports Arena and Mix from 7pm.

We take a look at what is being said ahead of Round 4 of Super League's first two matches, which see Wigan Warriors face Castleford Tigers followed by St Helens against Huddersfield Giants live on Sky Sports...

French back to boost Warriors

It has seemed like an age for Wigan fans, but their wait is finally over as Bevan French is set to make his first appearance of the year when the Cherry and Whites welcome Castleford to the DW Stadium on Thursday evening.

Head coach Adrian Lam would not be drawn on what position French is likely to play, with the possibility he might be deployed in the halves rather than at full-back - where Zak Hardaker has impressed in his absence - due to captain Tommy Leuluai nursing a sore sternum.

And while he cautioned the 2020 Man of Steel nominee may take a couple of games to return to that sort of form, he is delighted to be able to unleash French in any capacity as the hosts aim to make it four wins from four in Super League so far.

"At the start of a season, it always took me six weeks as a player to get my form back so I wouldn't assume Bevan will be playing his best rugby in game one," Lam, who also has prop Liam Byrne back from suspension, said.

"But this is Bevan French, remember, so he might come out and score a hat-trick in game one. Fingers crossed he hits the ground running."

Castleford have made an equally strong start to the new Super League season with three wins from three and sit just below second-placed Wigan in the early table.

🏉 Our final session ahead of Thursday's game day is in the books!

They made a statement with a 52-16 victory over Leigh Centurions last Friday - the same team the Warriors had to battle from 18 points down against to defeat in their season-opener - and have half-back Danny Richardson available again.

Tigers head coach Daryl Powell now wants his side to show what they are truly capable of against last year's League Leaders' Shield winners as they aim to prove their play-off credentials after missing out in 2020.

"Wigan are always very physical and that's going to be the first thing we need to get right," Powell said. "It's a great opportunity for us to go and prove what we're about this year.

"We've started really well, but there are going to be some big challenges ahead and this is obviously one." 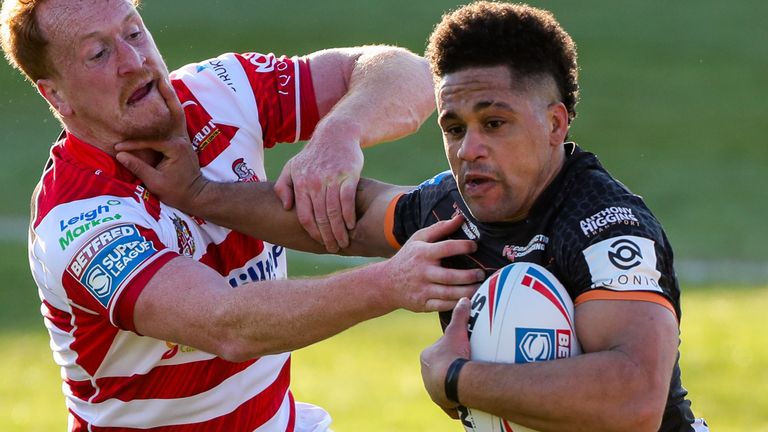 See all the action from the Mend-A-Hose Jungle as Castleford Tigers ran in 50 points against Leigh Centurions.

Although Richardson is back, Castleford will be without Gareth O'Brien due to injury and Jesse Sene-Lefao after he was handed a one-match suspension.

Tipped by many pundits as possible dark horses in Super League this year, Huddersfield's new era under Ian Watson has so far yielded just one win from four matches which came against promoted Leigh in the Challenge Cup.

The Giants were unable to follow up that victory on their return to Super League action last Friday as they were edged out 25-24 by Hull Kingston Rovers despite a Lee Gaskell-inspired fightback in the second half.

That lack of consistency in matches so far is what club captain Michael Lawrence pinpointed as the major issue for Huddersfield so far this year.

"I feel we've been very patchy," Lawrence told Sky Sports. "We had a good second half against Catalans, we were good for 60 minutes of the game against Leigh and even though we won there was an area in that game we got a little bit sloppy.

"At the weekend we only performed in the second half, so we've got to get that consistency. When we do put that 80-minute performance together, we'll start firing and we'll start getting some wins. 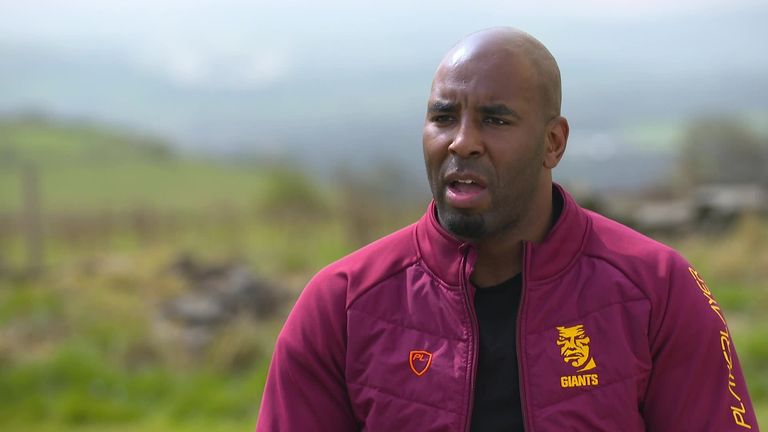 Huddersfield skipper Michael Lawrence says his side have been lacking consistency so far this season.

"Coming up against the back-to-back champions is a great game and a great opportunity for ourselves."

Saints braced for 'toughest challenge yet'

By contrast, reigning champions St Helens could hardly have made a better start to their quest for a third successive Super League title and go into the match sitting top of the standings after three rounds following last week's 34-6 win over Wakefield Trinity.

But despite the two sides' contrasting fortunes in the opening rounds of the 2021 season, head coach Kristian Woolf has warned his players this will be the stiffest test they have faced so far in the campaign.

The Australian expects the Giants to raise their game when they host the back-to-back champions and expects the quality in their squad to start coming to the fore sooner rather than later. 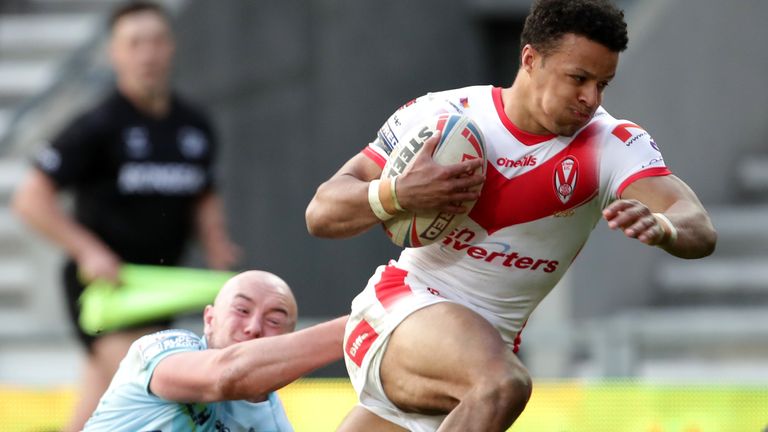 All the tries from the Totally Wicked Stadium last week as St Helens ran out 34-6 winners against Wakefield Trinity.

"I look at it as potentially our toughest challenge yet," Woolf, who is without Tommy Makinson for the match due to a minor foot injury but welcomes back Sione Mata'utia, said. "I think if you look through the Huddersfield squad, they've got a very classy squad.

"When you do lose a couple of games you get a real steel about wanting to turn that around and that's what I'd expect them to have this week.

"We certainly expect teams to come and be at their best when they play us - that's what we get every week. It's certainly what we've got the last few games and I wouldn't expect any different this weekend."