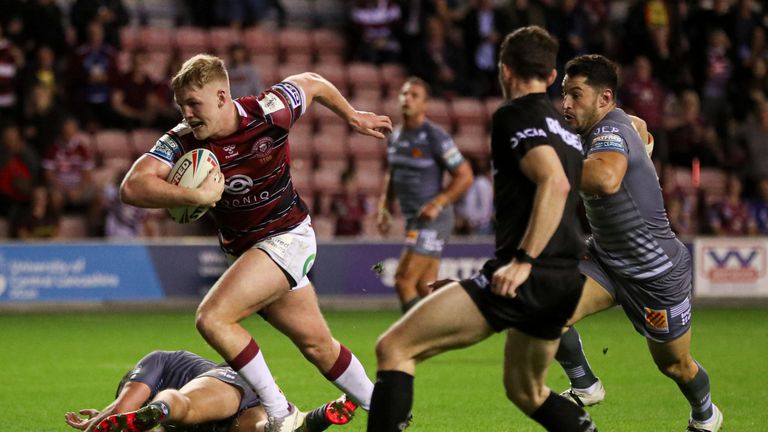 Wigan head into next week's play-offs full of confidence thanks to a hard-earned and well-deserved 12-8 victory over Betfred Super League leaders Catalans Dragons.

The Warriors were the better team in a ferocious first 40 minutes and they led by six points at the break thanks to a try from captain Willie Isa following a sublime kick by Jackson Hastings.

It took until the 52nd minute for the Dragons to breach Wigan's line with Tom Davies scoring in the corner - those were the first points the Warriors had conceded in more than 180 minutes of action.

It looked like the Dragons would go on to score more points, but it was Wigan who extended their lead with a fine try out of nothing for youngster James McDonnell, his first for the club.

A scrappy try from Matthieu Laguerre set up a tense finish, but the Warriors hung on to become only the fourth side to beat Steve McNamara's men in the league.

The Warriors, who made six changes to the team that beat Hull, created a couple of chances in the first half with Kai Pearce-Paul dropping the ball close to the line, while Jake Bibby was thwarted by a fine Sam Tomkins tackle.

Catalans had chances of their own, but Wigan's line defence was on point as they prevented Gil Dudson, James Maloney and Davies crossing the whitewash.

The Dragons were dealt a massive injury blow after 20 minutes when Tomkins - their best player on the night - limped out of the action and was replaced by Arthur Mourgue.

Wigan were finding a little bit of success down the right-hand side with Hastings and Pearce-Paul, but the final ball continued to let them down.

The Warriors finally opened the scoring in the 27th minute when Hastings - who was causing Catalans a whole host of problems - sent a grubber kick in for Isa to touch down. Zak Hardaker converted as Wigan held a deserved 6-0 lead.

Wigan pride themselves on their defence and they were on top form in the first half with Sam Kasiano twice halted.

The first points of the second half were always going to be crucial and Catalans started it the stronger, with Kasiano again causing problems with his barnstorming runs.

Mike McMeeken made a break down the right and he drew in the Wigan defence to send Davies in at the corner. Maloney was off target with the conversion attempt as they trailed 6-4.

Wigan lost Brad O'Neill to a head assessment in the 58th minute with the incident going on report. However, that did not upset their rhythm at all as they extended their lead with a superb try from McDonnell.

There did not look much on when the youngster got the ball 30 yards out but he used his speed and strength to get over the line and, with Hardaker's conversion, they led by eight points with 17 minutes remaining.

The Dragons set up a tense finish as Laguerre touched down after Pearce-Paul was unable to ground the loose ball. Maloney hit the post with his attempt and the gap was down to four points.

Catalans were on the front foot but a big hit on Josh Drinkwater saw him drop the ball. The Dragons disagreed with the decision and Kasiano was sin-binned for dissent.

Wigan thought they had made the points safe when all Hardaker had to do was collect the ball and touch down - but he dropped it. However, it did not end up costing them.