Hastings shone at full-back for the Warriors, setting up three of their five tries and kicking a drop goal; Jake Bibby scored a hat-trick, with Liam Marshall and Joe Shorrocks also going over for Wigan 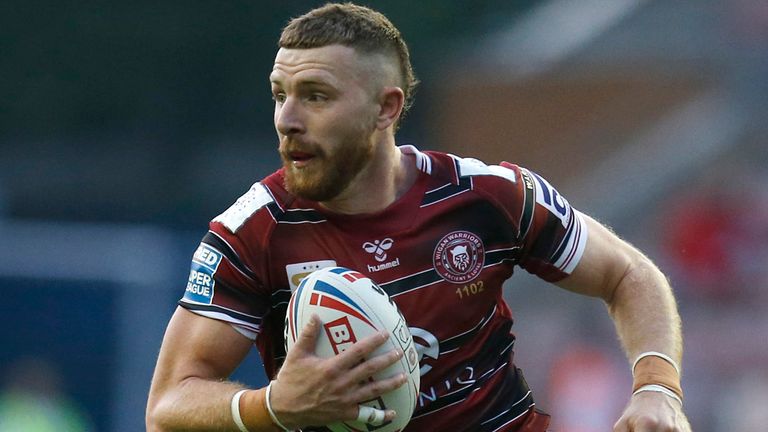 Jackson Hastings was the star for Wigan Warriors as they made it three successive Super League wins with a dominant performance in a 25-12 victory over Wakefield Trinity.

The Warriors were the better team in the opening 40 minutes but were unable to make that dominance count in terms of points as they led only 9-0 at the break.

The opening try came in the 13th minute when Hastings spotted Innes Senior out of position and sent a cute kick behind him and Jake Bibby was on hand to touch down in the corner. Bibby then grabbed his second try just before the break and Hastings slotted over a one-pointer.

Wakefield had chances to score themselves, with Senior, David Fifita and James Batchelor going close, but Wigan's defence held firm.

Two tries in the space of three second-half minutes from Bibby - his hat-trick try - and Joe Shorrocks put the Warriors out of sight at 21-0 and there was no way back for the Yorkshire outfit.

Liam Marshall grabbed Wigan's fifth try and they were cruising at 25-0, but Wakefield refused to lie down and they posted two tries in the final 10 minutes through Batchelor and Jay Pitts.

Wakefield's first venture into Wigan's half saw them rewarded with a drop out as they laid siege to the Warriors line, with Fifita twice going close.

They then thought they had posted the first points of the night as Senior went over in the corner, but he was ruled to have gone in touch first. Wigan then made them pay, with Hastings heavily involved in the opening try.

Tony Clubb was held inches short of the line, the ball went to the right, Hastings opted to send a delicate kick behind the defensive line and Bibby was on hand to touch down. Harry Smith missed the conversion attempt as the home side led 4-0.

Trinity were growing into the game with Batchelor, Lee Kershaw, Fifita and Senior going close, but it was the Warriors who went in at the break leading on the back of a second try just before half-time as Hastings sent a ball out for Bibby to finish again.

Hastings then capped a superb first 40 minutes as he dropped a goal from 35 metres to put the Warriors 9-0 in front.

Hastings was untouchable in the second half as well. First, he made a break to get Wigan on the front foot and then sent out another flat ball for Bibby to go over for his hat-trick.

Wigan were in full control now and they grabbed their fourth try of the game in the 49th minute as Shorrocks reacted the quickest to a kick inside from Liam Farrell. Smith converted and the Warriors were out of sight at 21-0.

Wakefield could not lay a finger on Hastings, who was everywhere for the Warriors and, unsurprisingly, played a key role in their fifth try of the night. His pass out left allowed Marshall to race in for this second try of the season.

Despite being outplayed, Wakefield refused to lie down and their desire was rewarded with two tries as Wigan appeared to switch off.

Batchelor forced his way over from close range before Pitts crossed to make the scoreline a little more respectable.