Hughie Fury on new and improved style and power - he warns rivals: 'I don't think they will be standing up'

Hughie Fury is back, just a week after his cousin's heavyweight chaos in Las Vegas, but he won't be overshadowed for much longer.

Fury mania is more manic than ever after Tyson's demolition of Deontay Wilder, a spectacular finale to a long-running saga on the Vegas strip.

But amid the hysteria, Hughie must now produce one of the most important victories of his own career against Christian Hammer tonight, live on Sky Sports.

"I believe now I'm the best and the only thing now is stop talking and do it," Hughie Fury told Sky Sports.

"I wouldn't train like a maniac every single day for the rest of my life, if I didn't think I was capable of doing it."

Hughie's self-belief will come under extra scrutiny this weekend, with fresh intrigue surrounding the family name.

But after a year of obscurity, the 27-year-old perhaps needs a night of now-or-never judgement.

"My main thing is - getting to the top." 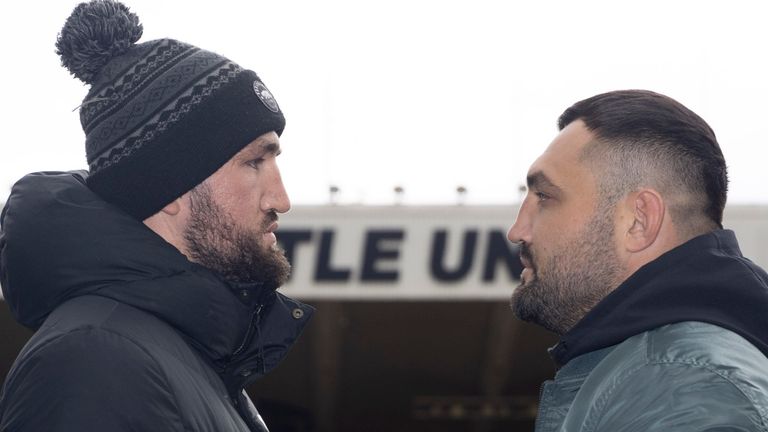 Father and trainer Peter has watched his son persevere in pursuit of greatness, despite a cluster of defeats to world-class opponents such as Alexander Povetkin, Joseph Parker and Kubrat Pulev.

Even after a bloody victory over Mariusz Wach in December, Hughie endured a torturous wait for his next fight date against Hammer.

"He's been ahead of his time. He fought for a world title aged 22," admitted Peter Fury.

"You can't put men against young men or boys. Now, he's arrived on the scene as a full-set man.

"They are in the fight business. They are brought up street-fighting. It's a no-surrender business, it's not play.

"He'll fight until every last drop of blood leaves his body. The only time he goes out is if he's out cold.

"This is a warrior sport."

Hammer cruelly undermined David Price's ambitions with a punishing defeat on a past trip to Britain.

The imposing German has only been halted by a select few, including Tyson Fury, and Hammer has warned: "He's from the Fury family but he's not Tyson Fury. He's a young guy.

"I will try to break him and win the fight.

"I'm here to fight, standing like a man, and fighting."

Hughie could not hide his irritation as he replied: "Let's put it this way - he's not here fighting David Price now.

Peter Fury has called for more aggression and Hughie, who is now entering his physical prime, is more than happy to show it.

Past opponents were often frustrated by precision, rather than power.

"I don't think they will be standing up," said Hughie.

"Everyone that has sparred me, from years ago to now, can see a big difference."

If he can overpower Hammer quicker than any of his rivals, then it will be sweet vindication for Hughie following his spell in the shadows.

"Of course, it has [tested my love for boxing]. It's tested everything.

"When you're in that gym, constantly training, day in and day out, and there's nothing coming up, it disheartens you.

"But you've got to always focus on the main goal."

Tonight would be an ideal moment to deliver a startling victory, a timely reminder that another Fury has world title ambitions after refusing to be forgotten.