"It is unimaginable what is happening in this beautiful country to these beautiful people", says former world heavyweight champion Klitschko, who has taken up arms following Russia's invasion of his native Ukraine 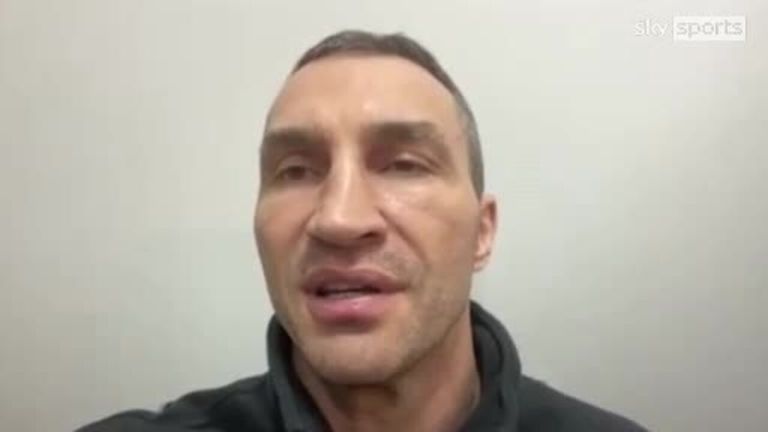 Former heavyweight champion Wladimir Klitschko says that being in a war is terrifying but he has never been prouder to be Ukrainian than right now.

Wladimir Klitschko has urged other countries to provide Ukraine with supplies and financial support following the Russian invasion, with the former world heavyweight boxing champion fearing the attack could extend to other nations.

Speaking to Sky Sports News' Rob Dorsett, Klitschko - who has taken up arms - praised the Western world for "standing for and with" Ukraine but says further assistance is imperative.

"To come to our home and kill our men, women and children, this is not human, what any human can do," said Klitschko, 45.

"We need supplies, we need food, we need medicine. We need any support, financial support, as we are alone in this case.

"But, in a way, we are all together. The democratic Western world stands for us and with us. This war, if it is not going to stop in Ukraine, it is going to spread out.

"If any of you are thinking, 'it's in Ukraine, I don't really care,' you should. Don't underestimate it, we should take care of it promptly.

"To in any way stop this Russian aggression is crucial. We don't have time to hesitate, it needs to be promptly done.

"It is just unimaginable what is happening in this beautiful country to these beautiful people."

Klitschko has been pleased with the way many sporting bodies have come together to ban Russian and Belarusian athletes from competing in events since the military attack on Ukraine was instigated.

FIFA and UEFA have prohibited Russian clubs and national teams from participating "until further notice" with many other sporting organisations following suit.

Klitschko added: "I am proud of the world's unity and seeing sporting communities standing together - the IOC, boxing federations, UEFA, FIFA, Formula 1.

"Ban Russian teams from participating. I have nothing against the athletes but they are presenting the regime and in some way the connection with this war.

On the current situation in Ukraine, Klitschko said: "It's a very challenging time in the lives of Ukrainians. I was never thinking I am going to face the war.

"You see and hear the explosions, the rockets, the destroyed vehicles, buildings - it is absolutely terrifying what the war can do.

"I am proud of the Ukrainian nation. Everyone stands for each other. I have never been as proud to be Ukrainian as now."

A number of Ukrainian athletes including Klitschko brothers Wladmir and Vitali and fellow boxers Vasiliy Lomachenko and Oleksandr Usyk, have taken up arms following the Russian invasion.